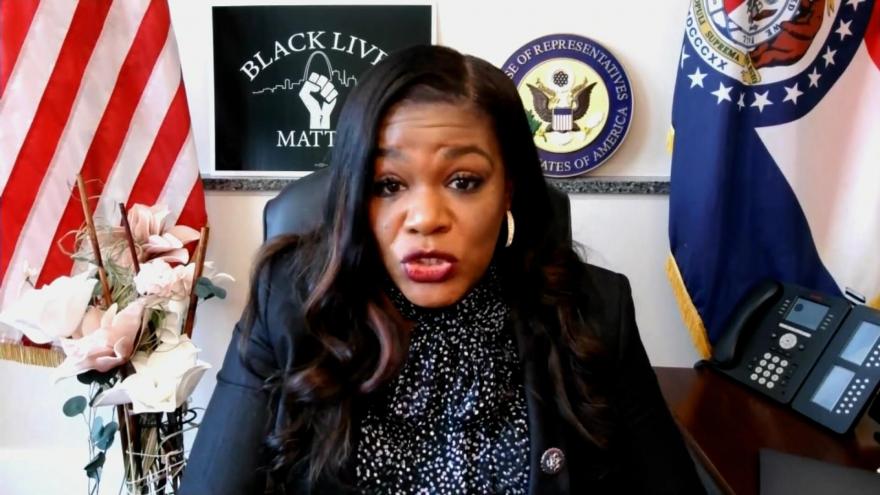 Democratic Rep. Cori Bush of Missouri said she would refuse to vote for new policing reform legislation that compromises on civil lawsuit protections currently afforded to police officers, as negotiations on a federal police accountability bill are underway on Capitol Hill.

(CNN) -- Democratic Rep. Cori Bush of Missouri said she would refuse to vote for new policing reform legislation that compromises on civil lawsuit protections currently afforded to police officers, as negotiations on a federal police accountability bill are underway on Capitol Hill.

Bush was just one of several lawmakers to weigh in on the federal policing reform effort, signaling that the issue of so-called qualified immunity remains, for some, a sticking point in congressional talks. The House passed the George Floyd Justice in Policing Act last month without Republican support, but it faces an uncertain future in the narrowly split Senate with Democrats pushing to change federal law to ensure that police officers can be charged for "reckless" conduct, rather than "willful" misconduct under existing law -- currently a higher bar to meet in court.

Still, Democrats and Republicans said Sunday that they see hope for a compromise on the George Floyd Justice in Policing Act.

Rep. Karen Bass, a California Democrat who is leading the negotiations with Scott, said Sunday that a critical piece of reforming the system will be setting national standards to guide police conduct and the use of force.

"We have 18,000 police departments and no national standards, which is why you see some practices legal in some areas and illegal in other areas," Bass said on ABC's "This Week," adding: "We know that officers are trained to shoot to kill, but maybe much more emphasis could be placed on de-escalation -- why some incidences result in people being killed. Maybe there were other ways to respond other than firing."

Bass said last week that she hoped she could work with Republicans to put together a framework before the one-year anniversary of the Floyd's death on May 25.

Scott last week floated his potential compromise on reforming qualified immunity, and has said some Democrats he has spoken with are open to it and he doesn't believe Republicans are far apart on the issues.

GOP Sen. Lindsey Graham of South Carolina said Sunday that he believes there is a way to find compromise on qualified immunity.

Bass said during a separate interview on the show she is willing to negotiate with her Republican counterpart on passing a bill, but stressed that "holding officers accountable is key."

"I don't know if I'm willing to blow up the deal, I don't consider that blowing it up, but we do have to look at ways," she told Wallace when asked if she would "blow up" the deal" if she couldn't reach a middle ground with Republicans on qualified immunity. "Now if Lindsey Graham and Tim Scott can show us some other way to hold officers accountable because this has been going on for just decades."

Other Republican lawmakers also signaled Sunday they are willing to negotiate on police reform legislation.

Florida Sen. Rick Scott suggested he is open to negotiating with Democrats on new standards for prosecuting or suing police officers, but said his priority is the protection of police officers and their ability to serve their communities.

"I'll always listen to everybody's proposal," Scott said in an interview with ABC. "But what I'm not going to do is put our law enforcement community in a position that they've got to second guess themselves when they're trying to make sure people are staying safe."

"I think there's a real -- and it's probably past due -- but a real want to get this done and, I think, to get it done right," she said. "But we've got to make sure that we are still recruiting in and have the possibilities of having what is a core, I think, function of our government, which is a law enforcement that protects us."