'We are not out of the woods yet.' Expert expects US Covid-19 cases to climb in the coming weeks 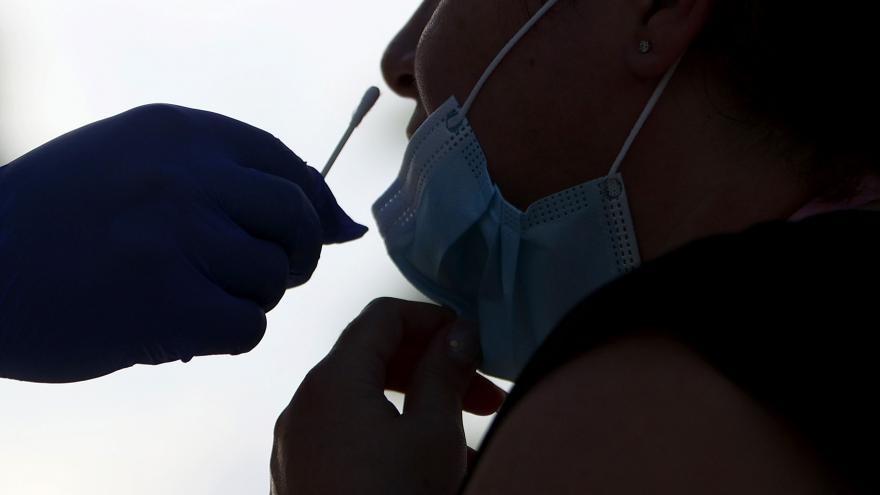 (CNN) -- New Covid-19 cases have been on the decline over the last week -- and while that development is hopeful, one expert is warning it's not time to let down the guard with the Delta variant still spreading and winter on the way.

"We are not out of the woods and I fully expect case counts to go up again across the country over the weeks and months to come," said Dr. Megan Ranney, the associate dean of the School of Public Health at Brown University.

Over the last week, the seven-day average of new cases has declined by more than 20,000 to about 130,000 cases a day, according to data from Johns Hopkins University. Much of the decline has to do with states that saw huge numbers of Delta variant cases early, such as Florida and Mississippi, coming down off of their peaks, Ranney told CNN on Wednesday.

And for the second consecutive week, an ensemble forecast from the US Centers for Disease Control and Prevention predicts that new daily Covid-19 hospitalizations will likely decrease over the next four weeks.

Last week's forecast, published September 15, predicted hospitalizations would decrease for the first time since the June 23 forecast. This week's forecast predicts that there will be 4,600 to 11,800 new Covid-19 hospital admissions likely reported on October 18.

But the South could still see more cases, and the Northeast could be in for a surge as well, Ranney added. And historically, more cases have been followed by increased hospitalizations -- a concerning possibility for many hospitals that are already inundated.

West Virginia has reached a record high of 1,000 Covid-19 hospitalizations for the first time, according to a press release from Governor Jim Justice. And across the country, nearly 80% of ICU beds are in use -- more than a quarter of those taken up by Covid-19 patients, according to the Department of Health and Human Services.

Despite the call from health care professionals for the public to get vaccinated to keep hospitalizations and death rates low, the current pace of vaccinations has reached the slowest point in two months, according to CDC data.

"For the vast majority of us, if you get your vaccines, you are not going to die," Ranney said. "As this disease spreads, it spreads throughout the entire community. It's more likely to catch those more vulnerable people."

On Wednesday, the US Food and Drug Administration granted an emergency use authorization for Pfizer's Covid-19 vaccine booster for people 65 and older, people at high risk of severe disease and people whose jobs put them at risk of infection.

"Today's action demonstrates that science and the currently available data continue to guide the FDA's decision-making for COVID-19 vaccines during this pandemic," acting FDA Commissioner Dr. Janet Woodcock said in a statement.

"I suspect what's going to happen is we'll continue to collect data on this cohort, 65 and over and other people who are made eligible, and eventually the agency may walk down the authorization to younger age cohorts, depending on what they learn from the data set here in the United States," Dr. Scott Gottlieb told CNN.

Gottlieb said that the CDC vaccine advisers will reconvene Thursday to interpret the FDA's authorization, which could apply to a "broad" portion of the population.

"It could include a lot of people who are at high risk from a bad outcome from Covid, because they're more likely to come into contact with the disease -- that they're working in occupations where they're put at risk of contracting the illness as well."

Some schools up preventative measures, others dial them back

Another consideration in managing the virus is the return of children to in-person learning, which schools are handling differently.

Some schools have amped up Covid-19 preventative measures as more students have been infected across the country.

In South Carolina, the Charleston County School District began fully enforcing its mask mandate Wednesday -- and as a result, a number of students were sent home for not complying, according to CCSD Director of Communications Andy Pruitt.

Students who don't come back to school adhering to the new policy will learn virtually until at least October 15, though they are welcome to return to the classroom wearing a mask, he said.

Elsewhere, precautions are being eased.

In Florida, Gov. Ron DeSantis announced a revised rule for the school year under which parents can send asymptomatic children exposed to Covid-19 back to class.

He said the policy -- which some educators opposed -- recognizes that quarantining healthy students is "incredibly damaging" for students' educational advancement and disruptive for families.