'We are getting crushed.' What's behind the alarming rise in California's Covid-19 cases 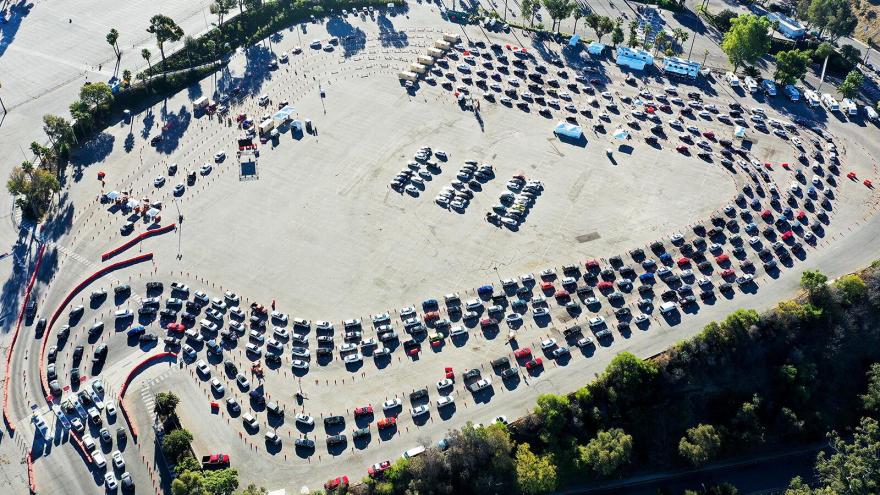 In an aerial view from a drone, cars are lined up at Dodger Stadium for Covid-19 testing on the Monday after Thanksgiving weekend.

(CNN) -- Since the Thanksgiving holiday, California has faced a surge of Covid-19 infections unparalleled across the United States, leading to continued daily record highs in hospitalizations and deaths.

Bed capacity in intensive care units has plunged to nearly zero in vast portions of the state as patients rush into hospitals, which are struggling to manage strains on resources and personnel.

State and local officials are continuing to enact lockdown and quarantine protocols for residents and visitors, even as the Pfizer/BioNTech vaccine rollout has provided some long-term hope. Aggressive stay-at-home measures put forth throughout California two weeks ago have yet to slow the spread.

As the nation's most populous state and home to approximately 1 in 9 Americans, California would understandably lead in a category such as total cases in a pandemic felt nationwide. However, it is the sheer volume of sick residents and the rate of increase that is particularly driving alarm.

The state averaged more than 40,000 new coronavirus infections every day for the week prior to Christmas, according to data from Johns Hopkins University (JHU), filling up hospitals and pushing health care workers to consider ways to ration care.

Multiple factors are at play when it comes to California's sudden acceleration of coronavirus cases, including Covid-19 fatigue, resistance to stay-at-home regulations, the huge number of essential workers and the socioeconomic factors of the pandemic affecting poorer and minority households.

More than 22,000 Californians have died

The California Department of Public Health announced 379 Covid-19 deaths December 17, the state's highest one-day total at that point, shattering the prior record of 293 lives lost, announced the previous day. More than 24,000 Californians have died from Covid-19.

California's overall case number is more than 2.2 million as of December 29, according to JHU data. The state health department says 33,170 new cases and 64 new deaths were added December 28.

The daily increase in cases is staggering for the state, particularly when compared to other outbreaks around the world. According to JHU Covid-19 data, California's daily average of new cases far outpaces Canada, Spain and Argentina, all nations with similar populations.

The forecast for the California health care system's response to Covid-19 is worsening. As of December 29, the state had 4,300 people admitted into intensive care, said Dr. Mark Ghaly, California Health and Human Services secretary.

Just 11 days earlier, on December 18, there was already a warning that LA County was moving toward becoming the epicenter of the pandemic.

Hospitalizations in Los Angeles County have doubled since the start of December, according to officials, who have pushed to discharge patients and continue care at home to handle the influx of arrivals.

Santa Clara County, part of the Bay Area, had only 15 ICU beds remaining of the 317 available as of December 16. In Los Angeles County, oxygen supply issues led at least five hospitals to declare an "internal disaster" on December 27.

Some hospitals will need to prepare for "crisis care," where medical professionals have to make "hard choices" about allocating resources, Ghaly said December 29.

As resources become more scarce and hospitals are being pushed to their limit, hospitals will determine whether they need to go in a "crisis care" mode. When this is implemented, other hospitals in the county or region may be asked to share resources or temporarily change their operations, Ghaly explained.

The state of California has issued guidance to help hospitals be able to remain in conventional or contingent care as long as possible before moving into crisis care. While the state has not been informed of any hospitals in the crisis care mode, some hospitals in Southern California have put in place some practices that would be a part of crisis care, Ghaly said.

In preparation for the fallout of additional thousands dying from Covid-19, California activated its "mass fatality" program December 15 to better coordinate assistance between state and local agencies. An additional 5,000 body bags were purchased, and 60 refrigerated storage units were expected to be used throughout the state for emergency overflow for coroners and morgues.

'This virus uses our humanity against us'

The arrival of the holiday season led to concern among health officials that families lulled into a false sense of security may gather in large groups over Thanksgiving, sparking infections in multiple households.

The surge may have proven their worries correct.

California, which in months prior did not face the same rate of increase as other parts of the country, accelerated in December to near the top of the list of states per capita with new daily infections, according to JHU data.

Yet the spike cannot be attributed to Thanksgiving alone. California cases were already beginning to rise earlier in November. State officials at the time directly tied it to Covid-19 fatigue, with more instances of private, indoor gatherings that can expose individuals to greater risk of infection.

"Unfortunately, the stories I hear from the patients, it's all been the same story. People are just having Covid fatigue," Dr. Thomas Yadegar, the ICU director at Providence Cedars-Sinai Tarzana Medical Center, told CNN's Paul Vercammen on December 18.

Yadegar explained his patients often described practicing social distancing and being mindful until Thanksgiving arrived, even going as far as checking symptoms and testing before meeting family.

"This virus uses our humanity against us. We want to be with our loved ones, especially around the holidays. And unfortunately as soon as you start mixing households, as soon as you come indoors, this is how the virus spreads," he said.

The early spring outbreak and later successes the state had against Covid-19 seem like a distant memory. After a summer of stop-and-start measures to reopen the state, the onset of winter has pushed California to return to lockdown plans.

"We're going through perhaps the most intense and urgent moment since the beginning of this pandemic," Gov. Gavin Newsom said December 15.

Divided into five regions, California kicks in stay-at-home orders whenever a region falls below 15% ICU capacity in area hospitals. Initially limited to Southern California and the San Joaquin Valley on December 6, the Sacramento and Bay Area regions later followed suit, impacting 98% of California's population. Rural parts of Northern California have avoided the 15% ICU threshold for now.

The orders require the closure of businesses such as bars, hair salons, museums, movie theaters and indoor recreational facilities. Retail businesses are allowed to stay open at 20% capacity, while restaurants are limited to takeout and delivery service. Travel is prohibited except for essential activities.

The regional stay-at-home order for Southern California and the San Joaquin Valley was extended December 29. The initial three-week order was supposed to expire the week of December 29, but the ICU bed capacity for both regions remains at 0% and, based on the four-week projections of ICU bed capacity, the demand exceeds capacity, according to Ghaly.

San Francisco announced December 17 that people returning or traveling to the Bay Area must face a mandatory 10-day quarantine, a measure that would be in place through January 4.

"Covid-19 cases are surging in San Francisco and across the country. Hospitals in the Bay Area are close to being overwhelmed," Mayor London Breed said in announcing the measure. "We must do whatever we can to contain the virus and stop its circulation in our community."

The frustration of Californians in response to the latest restrictions, however, may be an indicator of Covid-19 fatigue paired with the difficulties of navigating an ever-shifting lockdown landscape that some find inconsistent.

Ruth Benzor, a charge nurse for the Covid-19 unit at Arrowhead Regional Medical in San Bernardino County, told CNN's Anna-Maja Rappard earlier this month that she sympathized with the small businesses impacted by the pandemic, but she is faced each day treating dying patients with a shrinking number of ICU nurses and beds.

"I definitely want them to work, but they just have to understand that this is real and we just got to, you know, protect each other as a community."

The state department of health closed access to outdoor playgrounds in early December, yet reversed its decision after public and legislator backlash.

"It is necessary for the mental and physical health of children to have opportunities to expend their physical energy and play. However, especially in lower-income communities, families may have little to no outdoor space of their own available," California lawmakers wrote in an open letter to Gov. Newsom, citing the comparative decreased risk of infection via surface transmission.

Ferrer also noted the socioeconomic consequences of Covid-19 in LA County, stating that the death rate among those living in areas with the fewest resources is four times higher than those living in the most prosperous.

"The widening gaps are a stark reminder that many of our essential workers are Black and Brown, and many are not able to telework or stay home," she said December 16.

"Many work at jobs with low wages, and many live in under-resourced neighborhoods. During the surge all our essential workers are taking on increased risk at their jobs because community transmission rates are so high."

A UC Berkeley Labor Center analysis in May highlighted the millions of Californians who were considered essential workers during the earlier portions of the pandemic.

While parts of California are some of the wealthiest in the nation, poverty still affects a wide number of residents. A 2019 Census Bureau study found that, when accounting for additional expenditures and adjusted costs of living, nearly 1 in 5 Californians lived in functional poverty. The percentage was the highest rate in the nation among states.

A lesson for the nation to stay diligent

Despite having a supermajority of Democrats in its legislature, California is far from a homogenous bastion of blue. Much like the nation at large, pockets of a state can have a fervent base of an opposing party's supporters.

The Covid-19 numbers statewide do not reflect a scenario in which more conservative parts of California are failing while liberal parts are thriving, although according to state figures, some of the hardest struck counties per capita reside in Republican US House districts.

The statistics illustrate the politization of wearing masks and the reluctance to take the threat of Covid-19 seriously has created undue volatility for governments, businesses and individuals alike, and California's surge can serve as notice for the rest of the nation to stay diligent regardless of location.

"It's really not California, it's the entire country, unfortunately," Dr. Edward Jones-Lopez, an assistant professor at the Keck School of Medicine of USC, told CNN earlier this month.

Speaking to the need to wear masks and avoid family gatherings, he added, "The next two months are going to be critical to really understand how bad this can be. And even after the vaccine is slowly rolled out, we will need to continue with the basic interventions that we all know now."