We are almost out of hurricane names -- AGAIN. Here is what happens next 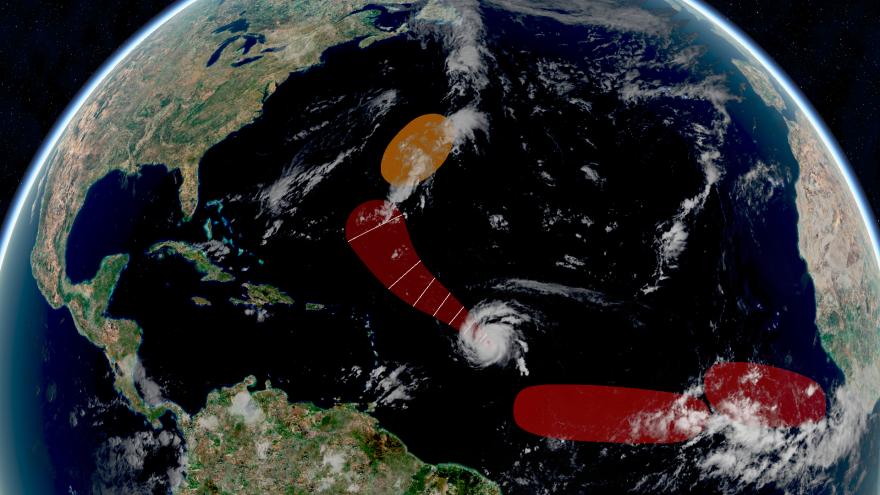 Editor's note: CNN Weather produces a weekly column, publishing Mondays, with the news you should be aware of and the week's hurricane outlook. Find updates each week here.

(CNN) -- It's that time in hurricane season when meteorologists like myself like to see the light at the end of the tunnel.

"We still have two months to go in what has been a very active season," says National Hurricane Center meteorologist Dennis Feltgen. "While we don't expect to have as many named storms as we had in 2020, we're at 19 right now with the possibility of one or two more by the end of the week."

If that's the case, we finish up all the names in the current list and move to the subsequent list before the month begins.

Wanda is the last name on the 2021 hurricane name list, which could be used by the end of the week.

After the record-shattering season in 2020, the World Meteorological Organization decided to do away with the Greek alphabet as the list we would use if we ran out of hurricane names.

Instead, they decided to go with a completely new set of names, if the original list was exhausted.

We are well on track to tap into that list. If so, the first name after Wanda would be Adria. Then Braylen. Then Caridad and Deshawn and so on. See the full list at the bottom of the NHC page here.

This season has been busy, no doubt. But how does it stack up to the busiest season of all time?

We decided to compare where we are so far this year to where we were on September 27 of last year.

By this time last year, we were already in the Greek alphabet and we had had four hurricane landfalls along the US coastline.

With more storms expected, the chance of a hurricane making landfall is quite plausible in the US.

We still have about two more months left in the season, and with La Niña expected to kick in, we could see an uptick in October systems, just like we did last year.

Last year, October was a busy month. Four more hurricanes were produced in the month of October, two of those making landfall in Louisiana.

Delta was a Category 2 storm that made landfall in Creole, Louisiana, very near where Laura made landfall just a few weeks prior.

Zeta was a Category 3 storm that made landfall in Louisiana in October 2020 near Cocodrie.

It was a devastating year for the state, and was followed up by what happened this year with Ida. A state with one of the most vulnerable coastlines in the US has been beaten the hardest with tropical systems for the last two years in a row.

As we roll into October, we could have similar dynamics as 2020.

La Niña is expected to develop in the coming weeks, which makes conditions more favorable for development in the Atlantic basin.

The timing of when La Niña sets up will be key. "We are currently in a La Niña watch. A lot will depend upon when it arrives," says Feltgen.

So while it looks likely that we will see more development in the coming weeks, the only unknown is how many, if any, will impact the US coast.

"Florida is especially vulnerable in October, as a prime development area is in the northwest Caribbean Sea," says Feltgen.

We typically see storms form in October a little closer to home.

"As the season progresses into October, the water temperatures in the Atlantic Ocean start to cool and wind shear increases, so the majority of the tropical activity shifts back into the Caribbean Sea and Gulf of Mexico, where water temperatures are usually still very warm," according to the National Oceanic and Atmospheric Administration.

Right now, the tropics are very active, which is typical for this time of year.

We have Hurricane Sam, which was a Category 4 major hurricane at its peak over the weekend. Sam has weakened some but is still a major Category 3 hurricane. Luckily, Sam is going to stay out to sea and not impact the US.

Peter has 'petered' out southeast of Bermuda, but could redevelop over the next few days as it becomes more organized. Peter won't be a threat to the US, either.

Two areas we should watch are much farther away.

Two waves off the coast of Africa each have an 80% chance of development over the next five days. Both systems are traveling westward at about 10 mph.

It's still far too early to know if these will have an impact to the US, but they are both worth keeping an eye on.

If these two systems are named, one will be Victor and the other Wanda.

More fires could ignite due to winds

Rain has returned and temperatures are cooling for much of the Pacific Northwest, helping firefighters on the ground battling the eight large fires burning across Washington and Oregon.

In California, more than 10,000 firefighters are on the front lines, fighting 10 active wildfires.

According to Cal Fire, "Since the beginning of the year, there have been 7,686 wildfires that have burned more than 2.4 million acres in California."

Red-flag warnings are currently up for portions of the Sierra Nevada in eastern California and western Nevada.

Winds will be blowing at 15-25 mph with gusts of 40-50 mph. The fire danger will remain critical for these areas through Tuesday.

"Containment of the fires has gone up significantly over the past few weeks, but wind gusts from 40 to 50 mph can quickly expand the fires again," said CNN meteorologist Chad Myers.

The Santa Ana winds will also be increasing for Southern California. This could mean more fires for the southern part of the state.

"Clearly, with so many small and large fires across California the last thing needed will be the gusty winds that are forecast to blow over the next few days," said Myers.

"As fall season begins, it is important to remember that some of the largest and most destructive wildfires occur during this time of year. Be prepared and do not let your guard down," says Cal Fire.

It's the first full week of autumn, but the traditional fall feeling of cool, crisp mornings with beautiful foliage on the trees might not happen for everyone yet.

Many states in the Northeast and Southeast are getting a much-needed reprieve from the summer heat, with the vast majority of locations within just a few degrees of seasonal norms.

But as you travel west, especially in and around the Rocky Mountains, the temperatures begin to resemble summer more than autumn.

You might just want to put your Pumpkin Spice Latte on ice if you live out West.

Watch these jaw-dropping impages of the volcano on Spain's Canary Island of La Palma.

The Cumbre Vieja volcano has been erupting for a week now and is threatening entire towns. The volcano first erupted on September 19 and has forced thousands of people to flee from the lava flows.

The volcano is expected to continue erupting during the next several days.

Despite warnings from the National Weather Service, giant waves crash into runners along Lake Michigan.