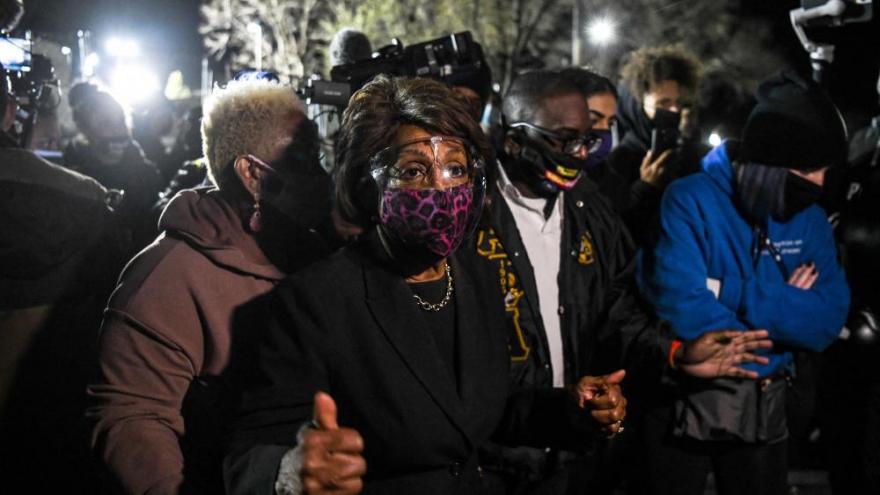 Rep. Maxine Waters on Saturday says the judge in the Derek Chauvin trial who criticized her remarks was 'angry' and 'frustrated.' Waters is seen here on April 17 at a protest in Brooklyn Center, Minnesota.

(CNN) -- Rep. Maxine Waters on Saturday called the judge overseeing former Minneapolis police officer Derek Chauvin's trial in the death of George Floyd "angry" and "frustrated" in response to his recent criticism that her comments at a protest could be grounds for appealing a verdict.

"I think he was angry. I think he may be frustrated with this case and how much world publicity is on it and all of that," Waters told CNN's Jim Acosta on "Newsroom."

Waters, last weekend, ahead of a verdict in the case, had called for protesters to "stay on the street" and "get more confrontational" if Chauvin were acquitted in Floyd's killing, comments immediately seized on by Republicans who claimed that Waters was inciting violence. The California Democrat said she was in Brooklyn Center, Minnesota, to show her support for protesters amid ongoing protests over the police killing of Daunte Wright and to also support his family.

After closing arguments in Chauvin's trial the following Monday, Judge Peter Cahill rejected a defense request for a mistrial over the publicity of the case, including TV shows and comments by Waters. Chauvin was eventually found guilty on Tuesday of all three charges against him, including second-degree unintentional murder, third-degree murder and second-degree manslaughter. The jurors deliberated for more than 10 hours over two days before coming to their decision.

"I talked with a lot of legal scholars and lawyers and of course he was way off track. He knows that in fact, the jurors were not in the room. The jurors had an oath not to look at television, not to read the newspapers, not to engage with people on this. So he knows that there was no interference with the jurors," added Waters defending her comments.

"[T]o say that I'm going to cause an appeal really is not credible. And whether or not they have an appeal, even if they mention my name, like the judge says, my comments don't matter anyway," Waters noted.

The congresswoman, pressed by Acosta on her recent op-ed in the Los Angeles Times, then went on to say that she receives death threats often.

In the piece, Waters says: "Now, because of who I am, the right wing and members of Congress who subscribe to the views of groups like QAnon, the Oath Keepers, the Proud Boys and the KKK have targeted me."

When asked whether she believes the Republican members of Congress referenced in her piece are non-violent, Waters responded with: "Well no, what is very interesting is I am threatened to be killed very often and so we are reporting to the Capitol Police and they are investigating all these attempts to kill me -- not attempts, but people who are calling in saying that they are going to kill me."

CNN has reached out to the US Capitol Police for comment.

Additionally, in the op-ed the congresswoman defends herself as being "nonviolent" and slams critics of her protest remarks calling it a "blatant distortion of the truth." She defended herself again on Saturday.

"So when you talk about violence, and you look at them and their alignment and you look at what happened January 6 when the domestic terrorists -- who are their friends -- broke into our Capitol and beat up police officers and caused one police death, and others to be harmed ... then I think people whether they like me or not will know their arguments are not credible," Water said.