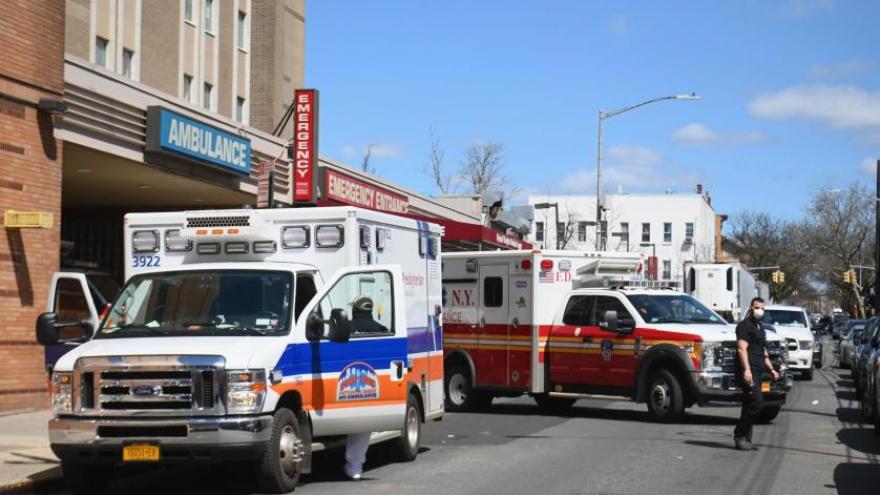 The nation's hospitals are dealing with "severe" and "widespread" shortages of needed medical supplies, hampering the ability to test and respond to the coronavirus pandemic adequately and protect medical staff, according to a new report from a government inspector general.

(CNN) -- The nation's hospitals are dealing with "severe" and "widespread" shortages of needed medical supplies, hampering the ability to test and respond to the coronavirus pandemic adequately and protect medical staff, according to a new report from a government inspector general.

The findings by the inspector general for the Department of Health and Human Services describe a dire situation for front-line doctors and medical staff as cases mount in hospitals.

The assessment, the first internal government look at the response, was based on interviews from March 23-27 with administrators from more than 300 hospitals across 46 states, Washington, DC, and Puerto Rico.

"The emergence of Covid-19 created unprecedented challenges for the US hospital system," HHS Assistant Inspector General for Evaluation and Inspections, Ann Maxwell, told CNN. "The role of this report is to provide a platform for these experiences in a point of time" and help inform decisions.

The report provides an accounting of the shortages faced by hospitals nationwide in trying to obtain equipment for staff and patients, including the avenues some hospitals turned to to acquire those items, like online retailers and paint stores. It also details the challenges hospitals faced in trying to keep up with testing demands and the inconsistent guidance that caused confusion.

The report is not a review of the Health and Human Service Department's response to the coronavirus outbreak and acknowledges the pandemic is "fast-moving, as are the efforts to address it."

"Since our interviews, some hospital challenges may have worsened and others may have improved," the report states.

When asked about the report during Monday's coronavirus press briefing, President Donald Trump questioned whether politics tinged the findings of the report.

"Give me the name of the inspector general. Could politics be entered into that?" Trump said.

Trump also questioned the integrity of the leadership in HHS' Office of the Inspector General, saying, "Well where did he come from, the inspector general? What's his name?"

The report was signed by a woman -- Christi Grimm, the principal deputy inspector general for HHS. Grimm has served in the federal government for more than two decades in both Democratic and Republican administrations.

Multiple media reports have revealed the obstacles before hospitals in trying to protect their own staff, while also treating an onslaught of patients. Among those obstacles has been the lack of testing.

According to the HHS IG report, the shortage of testing supplies, coupled with delays in results, led to patients staying in beds longer, staff using personal protective equipment that they may not have needed to use, and staff possibly exposing themselves to patients with the virus without knowing.

"An administrator at another hospital noted that the sooner the hospital knows whether patients are negative, the faster it can move them to a lower level of care that consumes fewer resources," the report reads. "As one administrator put it, 'sitting with 60 patients with presumed positives in our hospital isn't healthy for anybody.'"

While some hospitals found success in getting results more quickly by using commercial labs or public sources, others continued to experience inconsistent turnaround times, the report says. The effect was hospitals unable to advise patients on how long they should self-quarantine or undertake other measures, pending results.

"They're not discreet challenges that can be handled in a discreet way," Maxwell said. "They create a multiplier effect on the stress and strain of hospitals."

Hospitals were simultaneously competing for other limited supplies, like personal protective equipment and ventilators. One administrator stated that their hospital's purchaser was reporting delays of 3-6 months to replenish supplies, like surgical and N95 masks.

Some of the supplies hospitals received were not useable. One heath system said it received 1,000 masks from federal and state governments, half of which were for children and couldn't be used by adult staff, according to the report. Another hospital reported receiving a shipment of N95 masks from a state strategic reserve, but the elastic bands had dry-rotted. And one hospital said it received two shipments from a federal agency that contained personal protective equipment that expired in 2010.

The increased demand -- both among health care providers and the public -- has disrupted the supply chain and contributed to the delays.

The administrator of one hospital said that before the coronavirus outbreak, the "hospital's medical center used around 200 masks per day and that it was now using 2,000 per day," according to the report.

To try and make up for the shortfall, some facilities have considered other, non-traditional sources for personal protective equipment, like online retailers, home supply stores, paint stores, autobody supply shops, and beauty salons.

The report also highlights the shortages of ventilators. "Hospitals anticipated that ventilator shortages would pose difficult decisions about ethical allocation and liability, although at the time of our survey no hospital reported limiting ventilator use," the report reads. One administrator said, "[We] just don't know two weeks down the road what we will need," citing the difficulty in predicting a surge and how many ventilators would be needed.

While wrestling with limited supplies, hospitals reported that they "received conflicting guidance from different government and medical authorities" on issues like criteria for testing, determining which elective procedures to delay, use of personal protection equipment, and getting supplies from the national stockpile.

"It's difficult when a doctor or nurse shows you legitimate information from legitimate sources and they're contradictory," one administrator told the HHS IG.

Taken together, hospital administrators also expressed concern about the emotional toll was taking on staff, both professionally and personally.

As one administrator put it: "Health care workers feel like they're at war right now ... [they] are seeing people in their 30s, 40s, 50s dying ... This takes a large emotional toll."