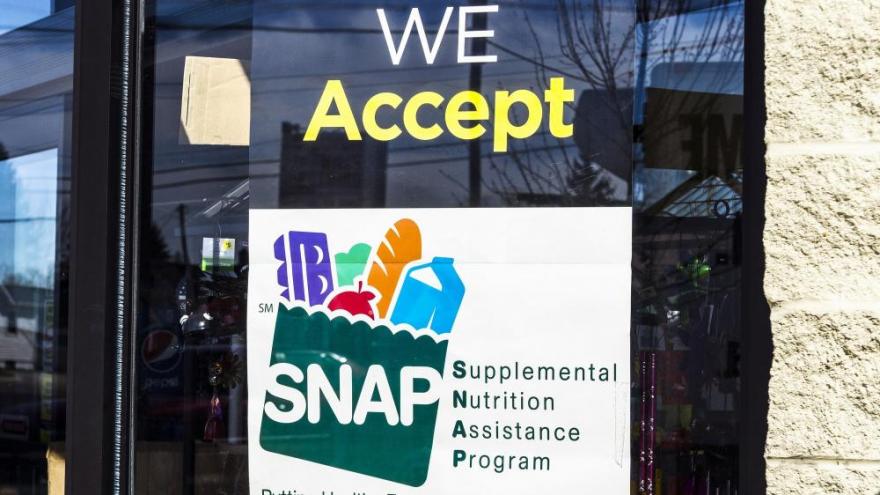 The Trump administration attempted to soften the blow and political pain of the longest-ever government shutdown earlier this year by continuing to issue food stamps, a move that violated federal law, the Government Accountability Office concluded Thursday.

(CNN) -- Congress' watchdog scolded the Trump administration on Thursday for violating federal law by spending money on cleaning up trash in national parks and on food stamps during the longest-ever government shutdown earlier this year.

The moves were intended by the administration to soften the blow and political pain of the partial government closure, which normally means all but some essential government functions cease.

The shutdown was triggered in December 2018 by President Donald Trump's demand that lawmakers include funding for a border wall during budget negotiations. It was resolved 35 days later, after Congress and the President agreed to temporarily reopen the government while negotiations continued.

The Government Accountability Office, a watchdog and nonpolitical arm of Congress, said the decisions violated the Antideficiency Act, which prohibits the executive government from spending money that Congress hasn't approved.

The Trump administration used funding from a special pot of visitor fee payments to clean up bathrooms and empty trash cans at national parks, which were suffering during the shutdown. Those fees are normally used for improvements to park facilities, such as creating or overhauling trails.

The GAO report said those fee funds should not have been spent on routine maintenance tasks and criticized the Interior Department's attempt to "circumvent the effect of a lapse."

It also issued a warning to department officials should another shutdown occur: "We will consider such violations in the future to be knowing and willful violations of the Act."

The shutdown also put at risk about 42 million recipients of the Supplemental Nutrition Assistance Program, also known as SNAP or food stamps. Those benefits are paid by the US Department of Agriculture to states, which distribute the funding.

Several weeks into the shutdown, Agriculture Secretary Sonny Perdue announced that department officials had found a way to pay out February benefits: It would cite a federal law allowing certain payments within 30 days of a shutdown's start and send states the money early. It also set aside about $3 billion it had on hand for a contingency fund.

At the time, USDA said this was a "legally sound decision."

But the GAO disagreed. Its review found the "USDA's actions were improper" and said the department "should report a violation of the Antideficiency Act."

"Based on our statutory construction analysis and USDA's historical pattern of obligations, we conclude that section 110(b) did not authorize USDA to obligate amounts for the early payment of February SNAP benefits," the GAO finding reads.

Neither the Interior Department nor USDA immediately responded to requests for comment.

It is unclear if any administration officials or federal employees could face consequences for the decision. The GAO's guidelines on the Antideficiency Act lay out these potential consequences for violations: "Employees may be subject to appropriate administrative discipline including, when circumstances warrant, suspension from duty without pay or removal from office. In addition, employees may also be subject to fines, imprisonment, or both."