Watch the Venus-Jupiter conjunction this weekend 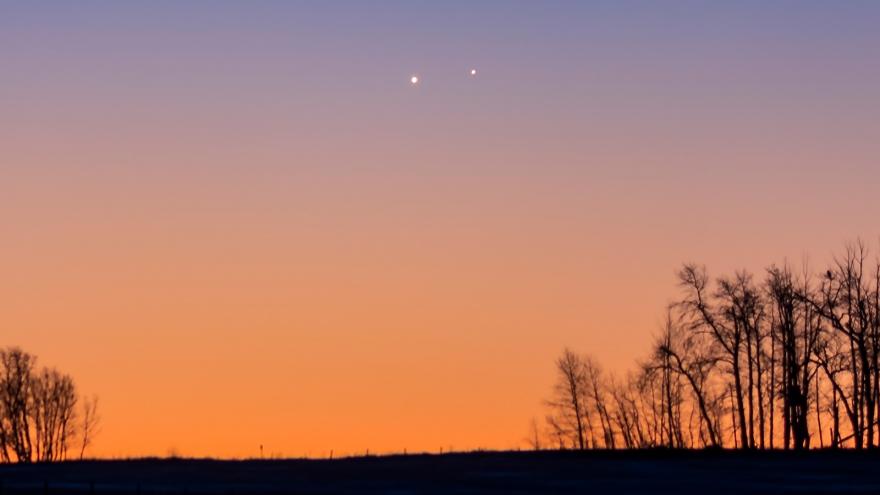 (CNN) -- Venus and Jupiter will appear to touch each other in the sky at the end of the month, despite actually being millions of miles apart.

The two planets will appear closest together around 3 p.m. ET on April 30, with Venus 0.2 degrees south of Jupiter, according to EarthSky. The distance is less than the diameter of the moon, the space site added.

By May 1, the planets will have continued on their paths and look as if they are spreadingfarther apart from Earth's vantage point.

The Venus-Jupiter conjunction happens about once a year, but this year the two planets will appear significantly closer than they usually do, said Patrick Hartigan, professor of physics and astronomy at Rice University in Houston.

A conjunction is when two planets appear to touch each other in the sky from Earth's point of view, according to NASA.

The last time the two planets were closer than this year's conjunction was August 2016, although it was more difficult to see since they were close to the sun, according to Hartigan.

In the nights leading up to the conjunction, the moon will slowly become less visible as it transitions to a new moon on April 30, according to NASA.

Although the conjunction takes place at the end of the month, viewers can already see the two planets slowly creeping toward each other. On April 27, they will be 3.2 degrees apart, EarthSky said.

Mars and Saturn will roughly align north of Venus and Jupiter, according to EarthSky, meaning astronomers will be able to see four planets while viewing the conjunction. Alignment means the planets form a line between them, but do not appear significantly close to each other like a conjunction.

"Venus and Jupiter are typically the two brightest planets in the sky, so they can put on quite a show when they are in close conjunction. It is a beautiful sight and easy for everyone to see," Hartigan said.

How to view the conjunction

The early morning hours of April 30 and May 1 will provide great viewing opportunities, according to EarthSky, and you won't need a telescope to view them.

In the Northern Hemisphere, viewers should look along the southeastern horizon just as dawn begins to break, but while it's still dark enough to see some stars, Hartigan said.

Stargazers in the Southern Hemisphere will also be able to see the conjunction under the same conditions, except Venus and Jupiter will appear above the eastern horizon, EarthSky said.

Because the moon will not be illuminated, it will be easier to see the two planets nearly touch in the sky. That's as long as the sky is clear, since inclement weather would block the conjunction from view.