Watch the US Coast Guard board a narco-sub carrying 17,000 pounds of cocaine 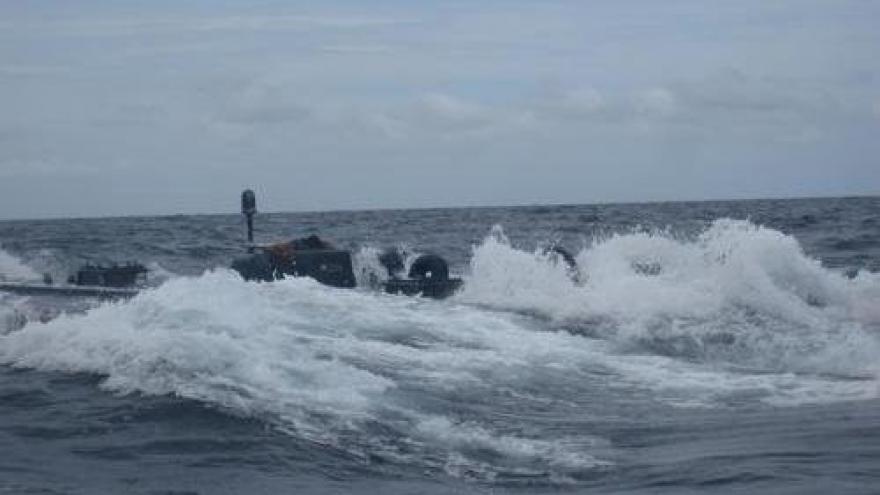 In addition to the massive amount of cocaine, the US Coast Guard also seized 933 pounds of marijuana, for a total seizure worth $569 million dollars.(23 kB)

The US Coast Guard released a video on Thursday that showed exactly how one might intercept a fast-moving narco-sub on the high seas -- netting more than 17,000 pounds of cocaine in the process.

The event, a video of which was released on July 11, took place on June 18 in the East Pacific Ocean. In the minute-long video, a member of the Coast Guard is heard yelling at a semi-submersible vessel tearing through the ocean -- a half underwater and half exposed vessel -- and demanding it stop.

Members of the guard then jump on the submarine-like boat, eventually forcing the top open to reveal the smugglers inside.

These vessels are relatively rare. They're expensive to build, and cartels have to build them deep in jungles to avoid detection. Once they're filled with drugs and deployed, Brickey said they're almost impossible to detect without prior intelligence or an aircraft.

"They blend in," he said. "Most of the vessel is underwater, so it's hard to pick out. They're painted blue. They match the water."

Even if the Coast Guard does manage to catch the vessel, they have to be quick. Every vessel is built with the ability to sink and destroy the evidence within minutes, with the smugglers knowing that the Coast Guard will make sure they don't drown, Brickey said. The smugglers could also be armed.

It's not easy, and the Coast Guard only stops an estimated 11 percent of the vessels that pass through the East Pacific -- an area Brickey said was about the size of the entire US.

The Coast Guard, he said say, is tasked with patrolling the area with the equivalent of two police cars.

And a part of of the problem is that 70 percent of Coast Guard's fleet is over 50 years old -- so they're slow and require a lot of maintenance before they can be deployed.

"They're not really effective enough to meet this new threat," Brickey said.

The five people involved were sent to the DEA for prosecution

In the filmed incident, the Coast Guard was able to detect the vessel with an aircraft, who relayed the information to members on the ground. Once they had an idea of where the vessel was, the guard launched two small boats to creep up on the smugglers, and were eventually able to board without detection.

There were five people on the vessel, who were then turned over the US Drug Enforcement Administration for prosecution.

The bust was the first time the Coast Guard used a new type of ship on a counter-drug patrol, and Brickey said the incident is a great example of what these new ships can do.

"These sorts of capabilities on these ships is what will make us successful in the future," he said.