Wasps have a bad rap; this summer, let's learn to love them 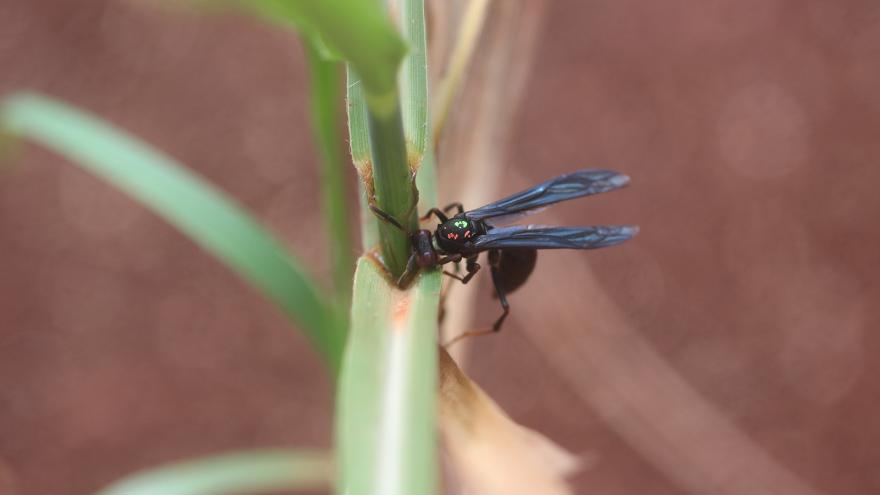 (CNN) -- Before you swat a stinging wasp away from your next picnic, pause to consider the delicate and beautiful hammer orchid.

When a passing wasp makes his move on the flower — tries to have sex with it, in other words — he inadvertently deposits pollen on the orchid's stigma. Without amorous wasps, these remarkable flowers would never bloom again.

That intricate relationship between flower and insect is one of many ways stinging wasps, or aculeate wasps, benefit ecosystems, human health and the economy, according to a new review paper by scientists at University College London and the University of East Anglia in the United Kingdom.

Published in Biological Reviews,the journal of the Cambridge Philosophical Society, the study is the most comprehensive meta-analysis of aculeate wasps to date, drawing on more than 500 scientific papers.

These insects, however, have a PR problem. They're unpopular with the general public and researchers alike. That attitude has resulted in gaping holes in scientific knowledge about wasps' role in ecosystems, the researchers said, and limited our understanding of threats posed to wasps by urbanization, climate crisesand more.

Since spring is when queen wasps start founding colonies across temperate climates, it's the perfect time to take a second look at insects that, researchers argue, have been overlooked for too long.

What wasps do for our world

"Everyone just kind of associates (wasps) with annoying them at barbecues or beers gardens," said lead study authorRyan Brock, a doctoral student in evolutionary ecology at the University of East Anglia. "It's always like: What is the point of wasps?"

Brock explained that the 33,000-odd varieties of stinging wasps included in the new study do more than hover, menacingly, near the potato salad.

"The two main things that wasps are doing for our ecosystems are as pest controllers and as pollinators," he said. Nearly 1,000 plant species may be pollinated by stinging wasps, found the review, including 164 species, such as the hammer orchid, that rely on wasps alone for pollination.

Should stinging wasps disappear overnight, those 164 plant species would be lost.

The insects are also agile predators. "Wasp species that live in large colonies are fantastic at hunting other insect species," Brock said. Without wasps, Brock said there could be an explosion in caterpillars and aphids. That, in turn, could decimate backyard gardens and crop yields.

While pest control and pollination are stinging wasps' most noticeable roles in the natural world, coauthor Seirian Sumner explained that wasps' other behaviors — what she called "ecosystem services" — are just as fascinating.

"They can strip a bird clear of meat within a few hours, they disperse seeds," said Sumner, a professor of behavioral ecology at the University College London, noting that both of these behaviors contribute to thriving ecosystems. She pointed to wasps' potential to contribute to human health, too.

"Wasps have medicinal properties in their saliva. Mostly, it's antibiotics," Sumner said, explaining that wasps' saliva helps preserve the paralyzed prey they feed their young. The medicinal value of wasps, though, is largely unexploited, she said. "Their venom sacks are essentially a pharmacy cabinet waiting to be opened."

2,000 years of throwing shade on wasps

When it comes to wasps, the new review study highlights just how much remains to be discovered. Some studies suggest that urbanization and development are harming wasp populations, Brock said. Climate crises seem to be changing the range of some wasp species.

The details, however, are uncertain. "It's really difficult to say if they're declining or not, and what are the factors causing those declines," Brock said. "We don't really have the data."

Why do such knowledge gaps remain? Wasps are unpopular in the general public, Sumner said. That lowly status means they're often neglected.

It may be a charisma problem. Some animals are just more likable to humans, explained Franck Courchamp, ecologist and senior research scientist at the University of Paris Sud, who wasn't involved in the wasp study.

In a 2018 paper, Courchamp worked to quantify the qualities that make an animal charismatic, awarding points for being beautiful, impressive, endangered, cute, dangerous and rare. Tigers, which Courchamp ranked as the world's most charismatic animal species, tick all the boxes. Wasps not so much.

"Animals that are not charismatic are often the animals to which people don't identify," Courchamp said.

Wasps, which can look like flying aliens, aren't easy to identify with. (In fact, wasps are thought to be an inspiration for the nightmare-inducing extraterrestrials starring in Ridley Scott's 1979 movie "Alien.")

If you think popularity and charisma are skin deep, Courchamp said that's not the case. Being lovable to humans can translate into more research, greater funding and increased conservation efforts.

Human distaste for wasps has been around a long time. In 350 B.C., the philosopher Aristotle knocked both wasps and hornets, writing they were "devoid of the extraordinary features which characterize bees ... they have nothing divine about them as the bees have."

In a 2018 paper titled "Why we love bees and hate wasps" Sumner, the wasp researcher, found that wasps are broadly disliked by the general public. Researchers, too, were inclined to choose bees over wasps as research subjects.

"People just associate wasps as being able to sting them," Sumner said. "Which is kind of ironic, since bees also sting."

"The bee community is huge," agreed Amy Toth, associate professor in the departments of entomology and of ecology, evolution and organismal biology at Iowa State University, who wasn't part of the wasp study. "Wasps have always been a little less focused on than bees and ants. I always joke that it's probably that people are scared of them."

Toth, who studies both bees and wasps, doesn't begrudge bees their widespread popularity. (She speculated that since many bees are furry, we mammals might find them more relatable.) Wasps, though, should share the pollinator spotlight, she argued.

"I kept seeing these memes where people were comparing and contrasting bees and wasps — demonizing the wasps while they were elevating the bees," she said.

"I always encourage people to educate themselves about misunderstood things in nature," Toth said.

If you're learning about wasps with kids, the American Museum of Natural History in New York Cityhas interactive online tools where they can pretend to be queen wasps or entomologists. When it comes to really appreciating wasps, though, Toth said the best approach is to study them firsthand.

"Look for wasps. You have a very low probability of getting stung," Toth said. "They're beautiful organisms."

Snapping some photos and tagging them #wasplove could even help us understand the remarkable insects better. "Post them to a citizen science initiative like iNaturalist," Toth said. "It will help scientists document their population, some of which may be threatened."

If the thought of wasps makes your skin crawl, learning to live with them may be a first step toward appreciating their strange beauty and important role in the environment.

"Go outside and look at wasps," Toth said. "Don't run screaming. Just let them be and observe."