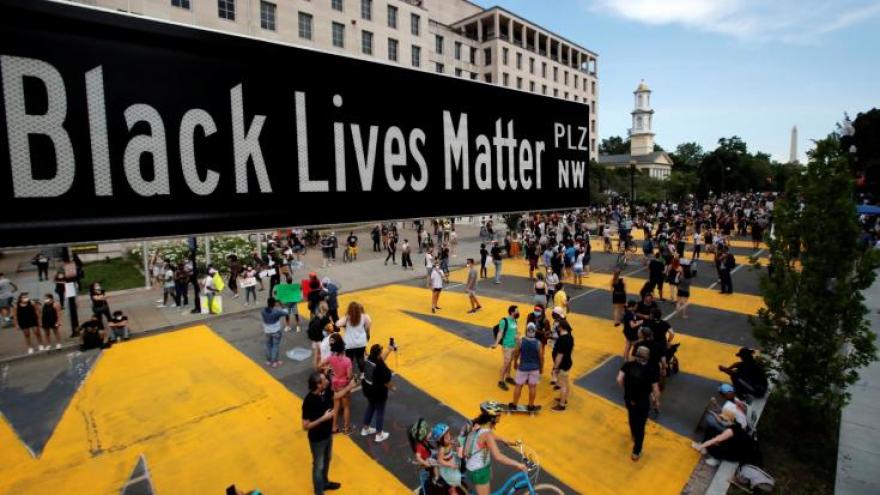 A street sign of Black Lives Matter Plaza is seen near St. John's Episcopal Church, as the protests against the death of George Floyd while in Minneapolis police custody continue.

(CNN) -- Washington's new BLACK LIVES MATTER street mural is so huge, you can see it from space.

New satellite images from Planet Labs clearly show the bright yellow message amid the gray Lego-looking buildings on the street leading to the White House, its grandeur minimized by the distance.

Washington Mayor Muriel Bowser commissioned the mural, which spans two blocks of 16th Street, as protests across the nation and the globe continue against police brutality after the deaths of Breonna Taylor and George Floyd.

With these protests, "Black Lives Matter," already a well-known phrase, has become even more popular -- even internationally. This mural cements that.

Still, the gesture has not been welcomed by all. The DC chapter of the Black Lives Matter Global Network has criticized it, calling it "performative."

"This is a performative distraction from real policy changes. Bowser has consistently been on the wrong side of BLMDC history," the group tweeted. "This is to appease white liberals while ignoring our demands. Black Lives Matter means defund the police."

Washington has been the site of more than a week's worth of protests in response to the death of Floyd at the hands of Minneapolis police officers.

St. John's Church, the site of President Trump's roundly criticized photo opp during a peaceful protest, sits along the expanse of road that now bears the BLM message. The demonstrations will continue throughout the weekend, including one Saturday expected to draw a large turnout.