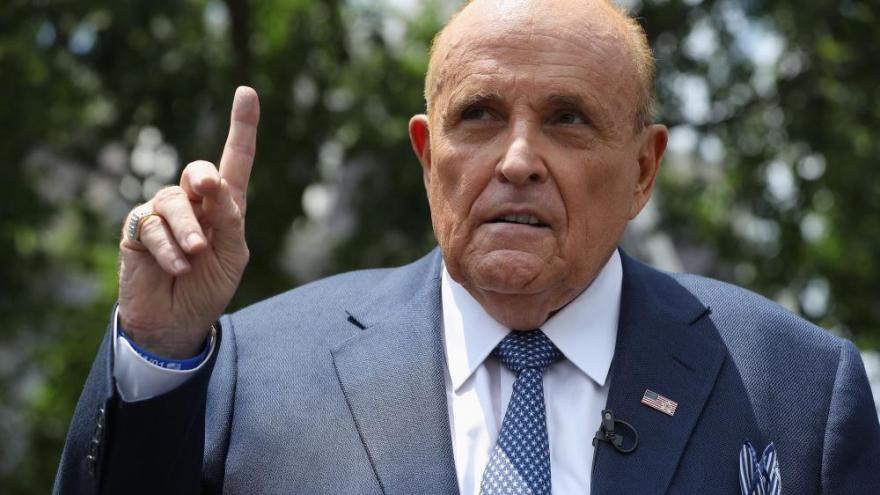 (CNN) -- The FBI in late 2019 knew Rudy Giuliani was the target of a Russian influence operation intended to damage now-President Joe Biden in the 2020 election by spreading falsehoods, but never directly warned him about the concern despite earlier reporting suggesting Giuliani had been briefed, according to reporting from The Washington Post that was corrected on Saturday.

Officials planned to warn Giuliani, then-President Donald Trump's personal lawyer, that he was at risk of being used by Russia in its attempts to sway the 2020 election, the Post reported, citing current and former US officials.

On Saturday, the Post issued a correction to its reporting on Thursday that Giuliani was directly warned by the FBI in 2019 that he was a target of the Russian operation.

The Post's correction at the top of its article stated: "An earlier version of this story, published Thursday, incorrectly reported that One America News was warned by the FBI that it was the target of a Russian influence operation. That version also said the FBI had provided a similar warning to Rudolph W. Giuliani, which he has since disputed. This version has been corrected to remove assertions that OAN and Giuliani received the warnings."

CNN had not confirmed that report and Giuliani's attorney, Robert Costello, denied that Giuliani was warned about the Russian intelligence effort.

"This story is totally false according to Mayor Giuliani. He never received any such briefing," Costello told CNN on Friday.

Shani George, a spokesperson for The Washington Post, declined to provide additional comment when reached by CNN.

In 2019, Giuliani was on a mission to find damaging information on Trump's 2020 election opponent Biden and his son, Hunter Biden. He met with Kremlin-tied associates who were attempting to influence the 2020 election, and publicly pushed misleading and unsubstantiated claims that were part of a Russia disinformation campaign.

Sources familiar with the matter confirmed to CNN that the Trump White House was warned that some of the information being passed to Giuliani was from foreign intelligence, and some members of Congress also were warned by FBI counterintelligence.

Giuliani has been the focus of an investigation concerning his activities in Ukraine, including whether he conducted illegal lobbying for Ukrainian officials while he pursued an investigation linked to now-President Biden, CNN has reported.

Giuliani hasn't been charged and has denied wrongdoing. On Wednesday, federal agents executed search warrants at Giuliani's Manhattan apartment and office, and people familiar with the matter tell CNN the probe is now focused primarily on Giuliani's Ukraine-linked activities.

The Post reported that the FBI gave a "defensive briefing" last August to Republican Sen. Ron Johnson, who, as chairman of the Senate Homeland Security committee at the time, was leading an investigation into the Bidens for Hunter Biden's role on the board of a Ukrainian energy company.

In the report that Johnson and Sen. Chuck Grassley, an Iowa Republican, issued last year on their investigation, they said they were briefed by the FBI. But they argued that the briefings were not an effort to discourage them from conducting their investigation.

The Republicans wrote that the FBI briefed the committees in March 2020 and briefed Johnson and Grassley in August. "On Aug. 6, 2020, Chairman Grassley and Chairman Johnson received another briefing from the FBI on behalf of the IC, in which the FBI stated that it is not attempting to 'quash, curtail, or interfere' in the investigation in any way," the report says.

In a statement, Johnson confirmed to CNN that he received a defensive briefing from the FBI.

"Regarding reports that I received an FBI briefing warning me that I was a target of Russian disinformation, I can confirm I received such a briefing in August of 2020," the Wisconsin Republican said. "I asked the briefers what specific evidence they had regarding this warning, and they could not provide me anything other than the generalized warning. Without specific information, I felt the briefing was completely useless and unnecessary (since I was fully aware of the dangers of Russian disinformation).

"Because there was no substance to the briefing, and because it followed the production and leaking of a false intelligence product by Democrat leaders, I suspected that the briefing was being given to be used at some future date for the purpose that it is now being used: to offer the biased media an opportunity to falsely accuse me of being a tool of Russia despite warnings," Johnson added. "To this day, I have not been told who ordered the completely unnecessary — but politically useful to my opponents — briefing."

Democrats warned in a letter last year to the FBI that Johnson was being sent information from entities with ties to Russia as part of a disinformation campaign targeting Biden. Johnson and Grassley disputed this, accusing Democrats of spreading disinformation.

CNN has previously reported that Giuliani and other allies of the former President publicly aligned with Kremlin-linked figures, even as the US government warned that they were spreading lies.

The Trump White House was warned in 2019 that Giuliani "was being used to feed Russian misinformation" to the President, which the Post first reported in October 2020. US intelligence agencies warned the White House that Giuliani "was the target of an influence operation by Russian intelligence" in which Trump was the intended recipient of the misinformation, according to the newspaper.

Giuliani traveled to Ukraine in December 2019 where he met with Andrii Derkach, a Ukrainian lawmaker that the Trump administration in September deemed an "active Russian agent" and sanctioned for attempting to influence the election.

The US intelligence community had previously singled Derkach out for assisting in Moscow's efforts to try and weaken Biden in the election. Giuliani had collaborated with Derkach to spread anti-Biden material during Trump's first impeachment trial.

Democrats have also charged that Derkach sent information to Johnson, who had denied receiving anything from Derkach and instead accused Democrats of themselves spreading Russian disinformation with the allegation.

The US intelligence community said in a landmark report in March that the Russian government meddled in the 2020 election with an influence campaign "denigrating" Biden and "supporting" Trump.

"A key element of Moscow's strategy this election cycle was its use of proxies linked to Russian intelligence to push influence narratives -- including misleading or unsubstantiated allegations against President Biden -- to US media organizations, US officials, and prominent US individuals, including some close to former President Trump and his administration," the report said.

UPDATE: The headline and story have been updated to reflect The Washington Post corrected its story to remove an assertion the FBI warned Rudy Giuliani directly of a Russian influence campaign.