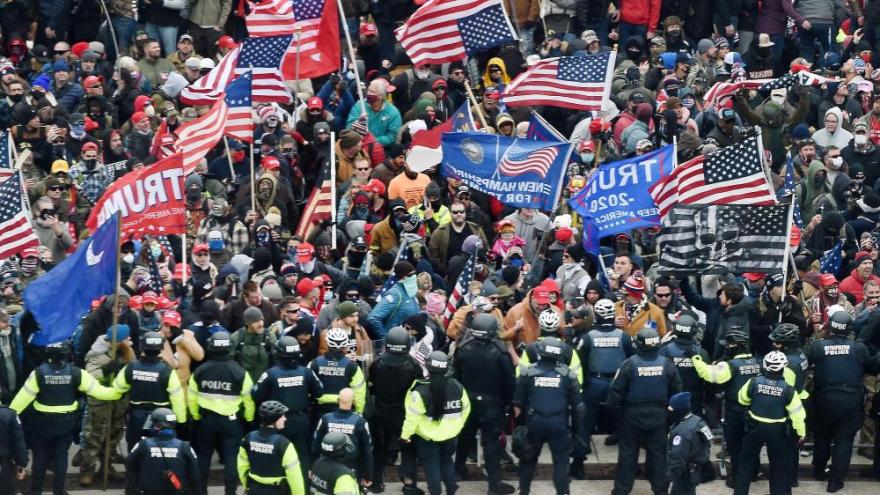 (CNN) -- An internal Capitol Police intelligence report produced three days before rioters breached the US Capitol cautioned that violent supporters of President Donald Trump could zero in on "Congress itself," the Washington Post reported Friday, citing obtained portions of the 12-page memo.

"Supporters of the current president see January 6, 2021, as the last opportunity to overturn the results of the presidential election," the memo reads, according to the Post. "This sense of desperation and disappointment may lead to more of an incentive to become violent. Unlike previous post-election protests, the targets of the pro-Trump supporters are not necessarily the counter-protesters as they were previously, but rather Congress itself is the target on the 6th."

CNN has not independently confirmed the veracity of the report. CNN has reached out to the Capitol Police, whose spokeswoman declined to comment to the Post on the contents of the report or its influence on planning for January 6.

The January 3 report warns of thousands of belligerent rioters, incited by the President and joined by members of White supremacists and extremist groups, descending on the nation's capital with members of Congress the target of their anger, the paper reported.

It included striking characterizations of Trump supporters seeming to prepare for intense combat on platforms frequented by White supremacists and members of the alt-right, calling for participants to bring firearms, gas masks, bulletproofs vests and other specialized equipment, the paper reported.

The intelligence report determined that the anticipated crowds, the calls for armament, proximity to the Capitol and promotion "by President Trump himself" could make it a dangerous situation, per the Post.

"The Stop the Steal protest in particular does not have a permit, but several high profile speakers, including Members of Congress are expected to speak at the event," the memo read, according to the paper. "This combined with Stop the Steal's propensity to attract white supremacists, militia members and others who actively promote violence, may lead to a significantly dangerous situation for law enforcement and the general public alike."

Former Capitol Police chief Steven Sund, who resigned in the aftermath of the attack on the Capitol, told the Post on Friday that the intelligence units reports informed preparation of security, but he declined to discuss an internal memo.

One law enforcement official told the Post that the internal perception of the memo wasn't that it was warning of some new threat with thousands of rioters attacking the Capitol, but rather of events similar to those the department had previously handled at smaller Trump rallies late last year.

The Post reports that the intelligence memo is not known to have been widely circulated with other branches of law enforcement, such as the FBI, or outside the Capitol Police force.