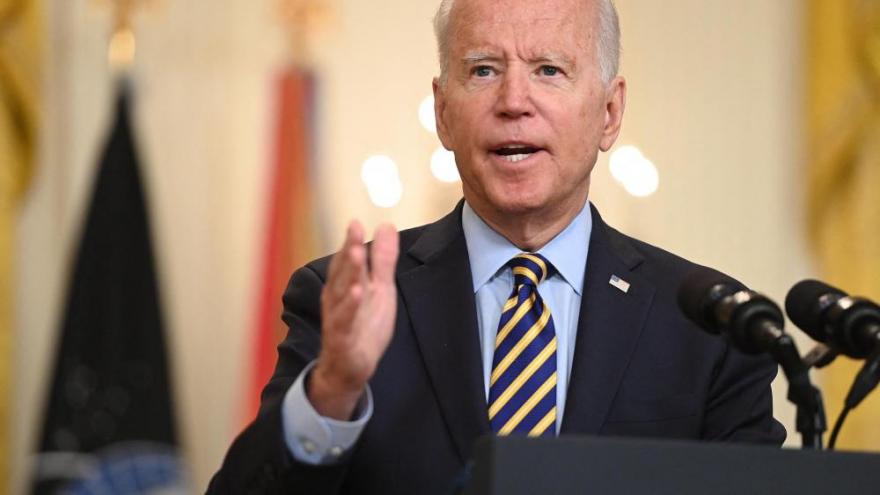 (CNN) -- The US government is preparing to warn American companies about the risks of doing business in Hong Kong.

US President Joe Biden on Thursday confirmed reports in various media outlets this week that his administration plans to soon issue an advisory to companies that will caution them of a "deteriorating" situation in the Chinese territory.

"The situation in Hong Kong is deteriorating, and the Chinese government is not keeping its commitment that it made, how it would deal with Hong Kong," Biden told reporters at the White House on Thursday, referencing Beijing's pledge to maintain the city's semi-autonomous status for 50 years after its 1997 handover from Britain.

Biden described the announcement as "more of an advisory as to what may happen with Hong Kong," without divulging more details, and experts believe it won't go much beyond flagging the rising risks.

This won't be the first time that Washington is urging caution about Hong Kong, which has undergone significant change since pro-democracy, anti-government protests roiled the city in 2019. China cracked down on Hong Kong last year by implementing a sweeping national security law that signaled Beijing is taking ever tighter control. The law raised questions about the city's future as an international business center.

Following the passage of that law, former President Donald Trump revoked the United States' special relationship with Hong Kong, which has in the past exempted the city from certain tariffs, among other privileges.

The US government also sanctioned several officials last year, including Hong Kong Chief Executive Carrie Lam, who later said she was forced to stockpile cash because the restrictions cut her off from the global banking system. (Reuters reported Thursday that Washington is preparing to impose financial sanctions on "a number of Chinese officials" over Hong Kong, citing two anonymous sources. CNN Business has reached out to the US State Department for comment.)

But Silvers said that it does reflect an "increasingly contentious" relationship between China and the United States. Relations have been eroding for years as the two countries clash over everything from Hong Kong and Xinjiang to Big Data, trade and foreign investment.

American companies have also been treading carefully in Hong Kong for a while, too, as the distinction between operating there and in mainland China fades.

Apparel and footwear company VF Corp announced in January that it would move Asia operations out of Hong Kong, relocating its supply hub to Singapore and establishing other services in Malaysia. It moved brand operations to Shanghai. The New York Times, meanwhile, moved its digital news operation for Asia from Hong Kong to Seoul.

Big Tech players have also expressed reservations: Facebook, Google and Twitter have paused the review of requests for user data from the city's government.

Last month, the president of the American Chamber of Commerce in Hong Kong called the demise of the city's pro-democracy tabloid Apple Daily a "shot across the bow" after its journalists were arrested and millions of dollars in assets were frozen. Authorities cited violations of the new national security law as their rationale for cracking down on the publication.

"It's not just the closure of Apple Daily," AmCham Hong Kong President Tara Joseph told CNN Business at the time. "It's the new normal, and the change that Hong Kong is going through from its era as a post-British colony to an era where it is, more and more, part and parcel of China."

The Hong Kong government has pushed back on such concerns. Lam told reporters last month not to accuse Hong Kong authorities of "using the national security law as a tool to suppress the media or to stifle the freedom of expression." Officials have also defended the city's status as a major financial hub, with the China Liaison Office in Hong Kong recently saying that its business environment had been stabilized.

The forthcoming announcement from the Biden administration is a "statement of the obvious," according to William Reinsch, a trade expert at the Center for Strategic and International Studies who served for 15 years as president of the National Foreign Trade Council.

"'One Country, Two Systems' is dead," he said, referring to the rule that has for more than 20 years afforded Hong Kong political and legal freedoms that are not available on the Chinese mainland.

"That makes it essentially a warning to US companies that the risk of being [in Hong Kong] has gone up significantly and puts the government in the position of being able to say, 'We told you so,' when something bad happens. And it will," Reinsch added.