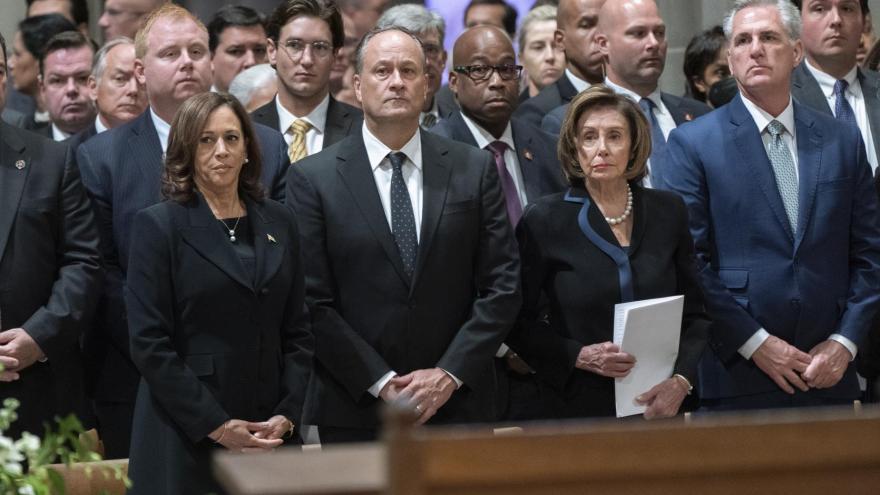 The British Embassy co-hosted the service to honor Britain's longest-reigning monarch. The service featured the UK's national anthem, "God Save the King," as well as the US' "The Star-Spangled Banner." House Speaker Nancy Pelosi, House Minority Leader Kevin McCarthy and other politicians and Washington public figures were among those in attendance.

"The Queen was a great friend and admirer of the United States," Dame Karen Pierce, British ambassador to the United States, said. "She paid some six official visits in total -- many more to the Kentucky stables -- addressing Congress as well as speaking to Presidents and attending football and baseball games and commemorative events such as America's bicentennial and the 400th anniversary of the Jamestown settlement."

Pierce, who is the first woman to serve as ambassador to the US from the UK, added that: "The Queen sought to move with the times. She was indeed the archetypal Bond girl, parachuting into the London Olympics. She poured tea for Paddington Bear as well as for heads of state. And here in the United States she was honored to receive in December 2021 the Ruth Bader Ginsburg award for women in leadership -- one of the very few times, we believe, that the Queen accepted a non-state award."

The Very Rev. Randolph Marshall Hollerith, the dean of Washington National Cathedral, said the Queen had visited the cathedral four times -- once as princess and three times as monarch. He noted many of the flowers decorating the inside of the cathedral for the service were taken from the grounds of the British Embassy, including a cutting from the Regal Prince Oak tree that the Queen planted during her visit to Washington in 2007.

Biden on Monday joined a one of the largest gathering of world leaders in modern times for Queen Elizabeth's II's state funeral inside London's Westminster Abbey. The Queen, whose rule spanned seven decades, died on September 8 at the age of 96.