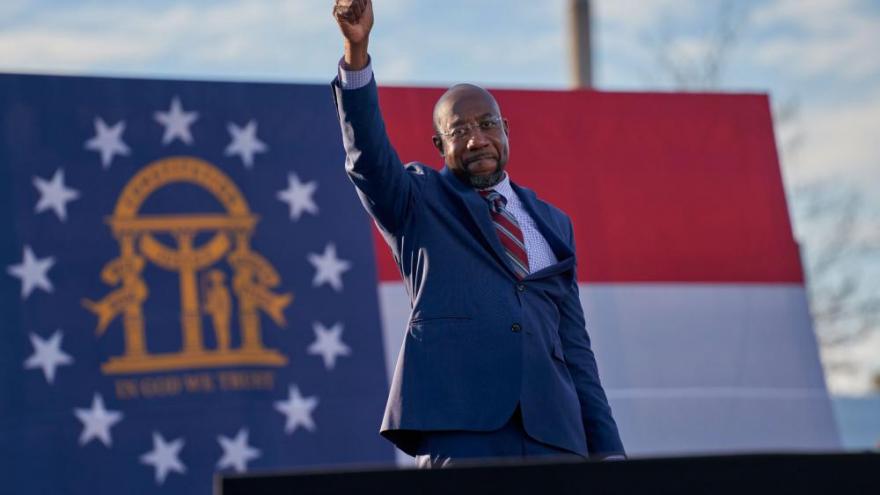 (CNN) -- Rev. Raphael Warnock will make history when he becomes Georgia's first Black senator and the first Black Democrat to represent a southern state in the Senate.

Once sworn in, Warnock will be the 11th African American to serve in the US Senate -- a group that includes former President Barack Obama, who served as a US senator from Illinois, and Vice President-elect Kamala Harris, who is a US senator from California.

On Wednesday, Warnock told CNN's John Berman that his victory was "stunning, but I think in America anything is possible."

"That's why I love this country so much and I refuse to give in to the forces of cynicism. It takes hard work. Change is slow, often it comes in fits and starts," he said. "Our democracy tends to expand and then there are moments when it contracts."

Warnock's projected victory is a significant breakthrough for African Americans in southern politics as his election is the culmination of years of voter registration drives conducted by former state House Democratic leader Stacey Abrams and other Black activists, who also helped flip Georgia blue this past presidential election. Warnock will also be the first Georgia Democrat elected to the Senate in 20 years.

In 2013, Sen. Tim Scott, a Republican from South Carolina, became the first African American to represent a southern state in the Senate since Reconstruction. America's first two Black senators, Hiram Revels and Blanche Bruce, were both Republicans elected by the Mississippi state legislature to represent the state during Reconstruction. More than 80 years later, Edward Brooke, a Republican from Massachusetts, would be the first African American elected to the US Senate by popular vote in 1966 and the third Black senator. Warnock, along with Scott and Democratic Sen. Cory Booker of New Jersey, will be the US Senate's only Black politicians. Harris will step down later in January when she's sworn in as vice president.

A senior campaign aide for Warnock told CNN's Kyung Lah that the campaign believes Democratic runoff voters were driven to vote for Warnock based on his message and the hopes of sending the first Black senator from Georgia to the US Senate, rather than out of anger at President Donald Trump.

"I am an iteration and an example of the American dream," Warnock said on CNN's "New Day," adding that he's "deeply honored" that Georgians would place their trust in him.

Warnock grew up in Savannah, Georgia, in public housing, the 11th out of 12 children. He's the first college graduate in his family, having attended Morehouse College, a historically Black college in Atlanta. And he's the senior pastor of Atlanta's Ebenezer Baptist Church where Martin Luther King Jr. preached.

Warnock's father, the late Rev. Jonathan Warnock, was born in 1917 in the Jim Crow South and was a World War II veteran. Warnock tells the story of how his father, dressed in his military fatigues, was asked to give up his seat on a bus to a White teenager.

"He never gave in to bitterness. He never gave in to resentment," Warnock said during a campaign rally earlier this month in Macon, Georgia. "He taught me to love America because he had lived long enough to see the arc of change in his own lifetime, and he knew if we worked hard enough that together if we built a multiracial coalition of conscious, we can bring change that allows the country to live up to its ideals."

Warnock's mother, Rev. Verlene Warnock, grew up in Waycross and worked picking cotton and tobacco in the 1950s.

In a speech Tuesday night, Warnock thanked supporters, paid tribute to his mother and highlighted his family history as how emblematic his candidacy is of the American dream.

"Because this is America, the 82-year-old hands that used to pick somebody else's cotton went to the polls and picked her youngest son to be a United States senator," Warnock said in his remarks.

"I stand before you as a man who knows that the improbable journey that led me to this place in this historic moment in America could only happen here," he added.