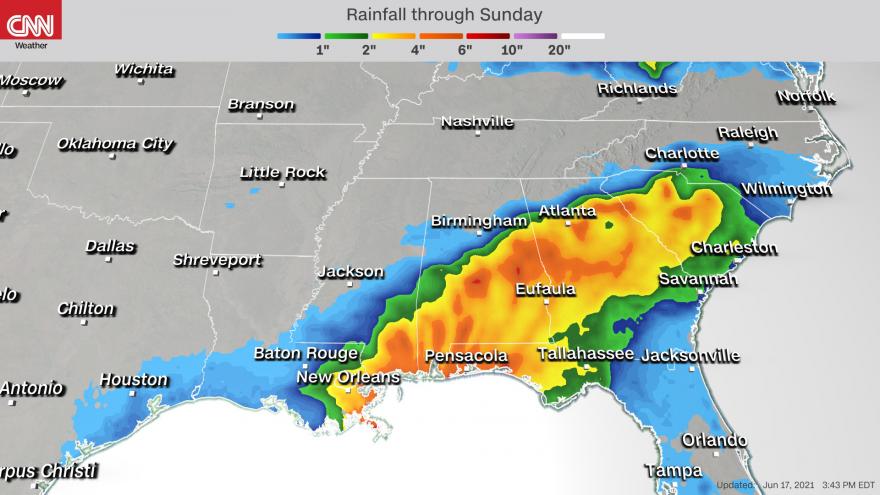 (CNN) -- Not Lousiana again. The state is starting off this hurricane season right where it left off last year: In the sights of another tropical system.

Tropical storm warnings are in effect from Intracoastal City, Louisiana, to the Alabama/Florida border, as Potential Tropical Cyclone (PTC) Three drifts toward the US. New Orleans is in the warning zone.

While landfall is expected on the Gulf Coast on Saturday, the storm's effects will come well before then.

"A tropical storm warning means that tropical storm conditions are expected somewhere within the warning area within 36 hours," according to the National Hurricane Center.

Louisiana was struck by four hurricanes in 2020 and has dealt with extensive flooding from severe storms this spring.

Additional flood alerts will likely be issued by the National Weather Service as the week ends.

Potential Tropical Cyclone Three on Thursday afternoon was located in the Gulf of Mexico north of the Yucatan Peninsula.

NHC uses the Potential Tropical Cyclone designation when a tropical cyclone is expected to make landfall within 48 hours, even though the system presently does not have tropical storm-strength winds.

The disturbance will continue to strengthen as it moves northward toward the US Gulf Coast Saturday. If it strengthens, as models are hinting at, into a tropical storm -- winds 39 to 73 mph -- it will earn the name Claudette.

The warm waters of the Gulf are providing the necessary heat energy to allow for enhanced storm development as the system progresses over open waters.

It is too early to tell how much the storm will strengthen at this time, but it is unlikely to become a hurricane.

If Tropical Storm Claudette forms, it will be the third named storm of the 2021 tropical season and will be the first to make landfall on the US.

The first storm of the season formed May 19 near Bermuda, becoming Tropical Storm Ana as it moved northeastward away from the island. Tropical Storm Bill formed just off the coast of North Carolina earlier this week without significantly impacting the US, trailing out to sea and dissipating.

Soaking rainfall for the Gulf Coast

Heavy rainfall is expected east of where the system's center makes landfall. Current models are showing the system pushing onto land near the Texas and Louisiana border.

"The area of most significant threat for heavy rain and severe weather will be displaced to the right of any circulation center," said the National Weather Service (NWS) in New Orleans.

Rain totals in the central Gulf Coast, including Louisiana, Mississippi and Alabama, could pass one foot in localized areas. Model guidance currently shows the heaviest rainfall on the coast of Mississippi and near New Orleans on the Chandeleur Sound.

The area is already highly saturated in soil water content due to the persistent rainfall it saw the past few months.

"Given the well above average rainfall experienced in May, soil moisture content remains high. Therefore, rainfall from this system could cause flooding throughout our area, most notably for the southern counties and parishes," the NWS in Lake Charles, Louisiana, warns.

The Weather Prediction Center has a moderate risk of excessive rainfall for southeastern coastal Louisiana, the coasts of Mississippi and Alabama, and the tip of the Florida Panhandle for Saturday.

A slight risk extends northward through much of Mississippi and Alabama.

Rain totals will be dependent on how quickly the system moves out of the region.

The bulk of the rain from PTC Three is forecast to push through Alabama and into northern Georgia this weekend before weakening significantly at the border of the Carolinas.

High wind threats are still uncertain, but guidance is showing winds strengthening to near 50 mph before making landfall on the US.

The criteria for a Category 1 hurricane is 74-95 mph winds. PTC Three will likely remain below that threshold as it approaches the US.

Severe weather associated with the tropical system is also possible this weekend. A marginal risk for severe weather is in place for the coastal region from New Orleans to Mobile, Alabama.

"At this point, it appears that a few brief tornadoes are possible on Saturday as the low moves inland," says NWS Mobile.

Waterspouts and a few spin up tornadoes pose the biggest threat.

Current forecasts show the system weakening upon landfall to a tropical depression once again as it moves northeastward.