Want to win at Wordle? Use these words 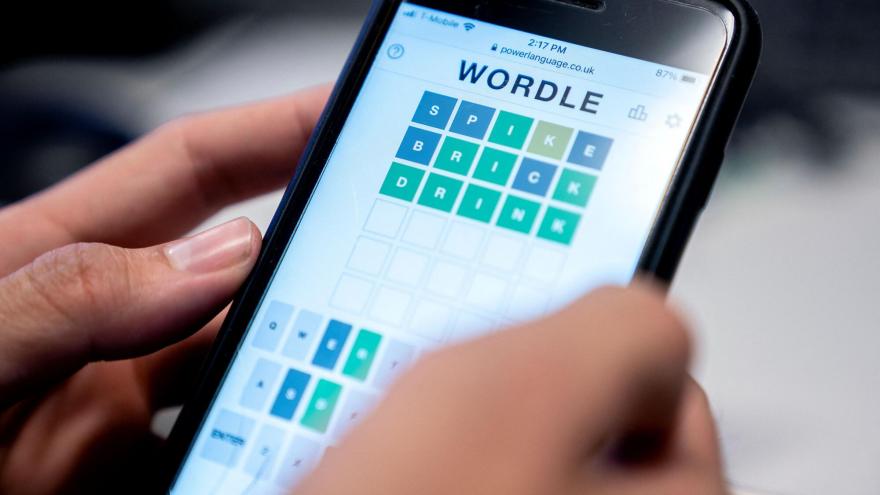 Wordle, an online word game, has become incredibly popular in recent weeks. Here's how to play to win.

(CNN) -- Wordle has taken over the internet.

A no-frills daily word game in which players have six tries to guess a new five-letter word each day, the game has become a phenomenon. Every day, social media is alight with users posting the green and yellow boxes indicating their scores.

The game is so beloved, so addictive, that on Monday the New York Times announced it had bought the game for "the low seven figures."

One of the keys to success in Wordle is a good starter -- you need a word that contains the most common letters or as many vowels as possible.

Of course, you can play based on vibes, too. Nate Cardin, professional crossword setter, starts his games with "ideal" and "south," he confessed in Slate.

But some of us aren't here for vibes, we're here to win. So here are some top opening words to accomplish just that, along with some bonus tips.

Many have preached the good news of "adieu." The word knocks out four vowels at once, a useful feat in a game like Wordle.

One such evangelist is Charles Curtis at USA Today's "For the Win," who wrote about the joys of starting the game with a goodbye.

"You'll immediately have a clear picture of which of the five are either in or out," he said.

Still, others argue "adieu" isn't really all that helpful. Instead, they recommend...

Bertrand Fan, an engineer at Slack, wrote that he had mixed results with "adieu" noting that sometimes it's great, but sometimes it's "not so helpful." So Fan found something better.

"Soare" is Fan's starting word of choice, and he makes a compelling case on his blog. Fan used data to discern exactly which strategy would be best, examining Wordle's HTML and finding a built-in list of solutions. Go Fan!

Using this list, Fan determined -- through a detailed process that maximizes both the most common letters and their most common positions -- that "soare," an old word for a young hawk, is actually the best starting word.

CNN can confirm that on February 1's Wordle, starting with "soare" revealed two yellow letters and one green, whereas "adieu" only led to one yellow letter.

This one, many might think, is the same as "soare" -- after all, it has the same letters. But the methodology is a little different.

Bill Jelen hosts MrExcel.com, a Microsoft Excel tutorial channel on YouTube. Similar to Fan, Jelen used data to come up with the best word. Using a list of 8,000 five-letter Scrabble words, Mr. Excel found that s, e, a, r, and o are the top five most common letters.

"So a word that has those five letters is going to win," Jelen concluded in his video.

Jelen recommended 'arose,' but he also pointed out that 'i' is the sixth most common letter, meaning that a word like 'arise' or 'raise' is also a good bet.

But "soare" may still be the best.

"There are more solutions where the letters in 'soare' are already in the correct positions compared to 'arose,'" Fan told CNN.

Sometimes, though, even if you start with the most optimal word, five gray blocks will stare back at you. In this case, Fan said he recommends trying "linty" as a second word, which "contains a lot of common letters but no overlap with the letters in 'soare.'"

This would also utilize Jelen's point of using the letter "i," the sixth most common letter, according to his analysis.

Another tip? Never end a word with an "s." Spoiler alert: There are no plural words in the possible solutions list, Fan said.

And if you're stuck between two words, Fan has advice for you, too -- go for the most creative one.

"The solutions are hand picked, so often when I have a choice between two words, I'll pick the one that I think the creator would think is more clever and folks would stumble upon," he told CNN, listing "shire" and "rhino" as examples.

Whichever strategy you implement, Josh Wardle, the creator of the game, reportedly first built Wordle as a fun game for his partner, who loves word games. So whether you start with something statistically successful like "soare," or something fun like "ideal," just remember to do it for the love.