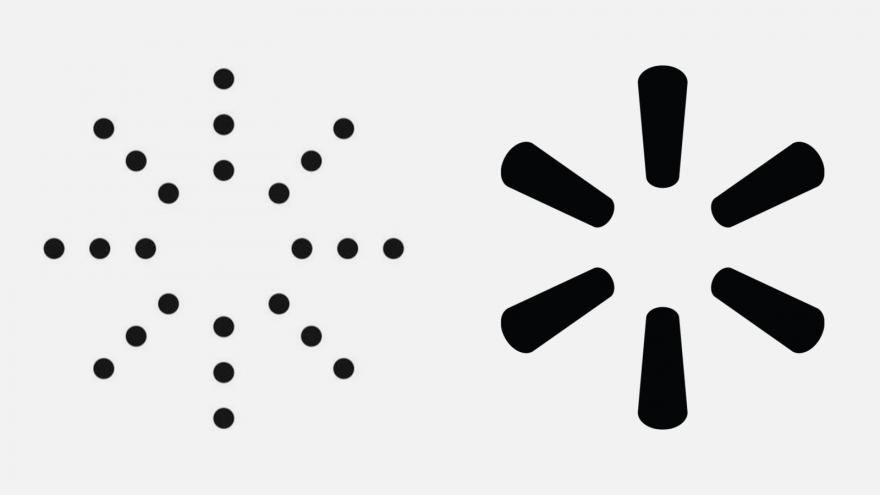 (CNN) -- Walmart is coming after Kanye West for releasing a proposed logo design that the retailer says too closely resembles the company's own logo.

The retail giant filed a notice of opposition on April 21 to the US Patent and Trademark Office, challenging a logo trademark application that was submitted by Kanye West's apparel brand, Yeezy. "Walmart believes the logo design depicted in the Yeezy Application is confusingly similar to Walmart's well-known spark logo design," according to a letter the company provided to CNN Business.

Both logos resemble a sun: Walmart's logo has thick lines that look like sun rays and Yeezy's proposed logo has lines made up of a set of dots that also resemble sunlight.

According to Walmart's letter, the company communicated with Yeezy in July and August 2020 and again in each of the first three months of this year. "To date, we have not received any conclusive information from Yeezy regarding the planned use or any cooperation from Yeezy in order to find common ground," the letter states.

Walmart has been using the sun-like logo since 2007, and Yeezy filed documents for its proposed logo in January 2020.

Kanye West has earned a lot of money from his fashion company. The rapper turned shoe mogul is now reportedly worth $6.6 billion, and the vast majority of his wealth is tied up in his apparel businesses. West's Yeezy sneaker partnership with Adidas and his clothing line with the Gap are worth a combined $3.2 billion to $4.7 billion, according to a UBS report published in February.

The Yeezy team has not yet replied to a CNN Business request for comment.