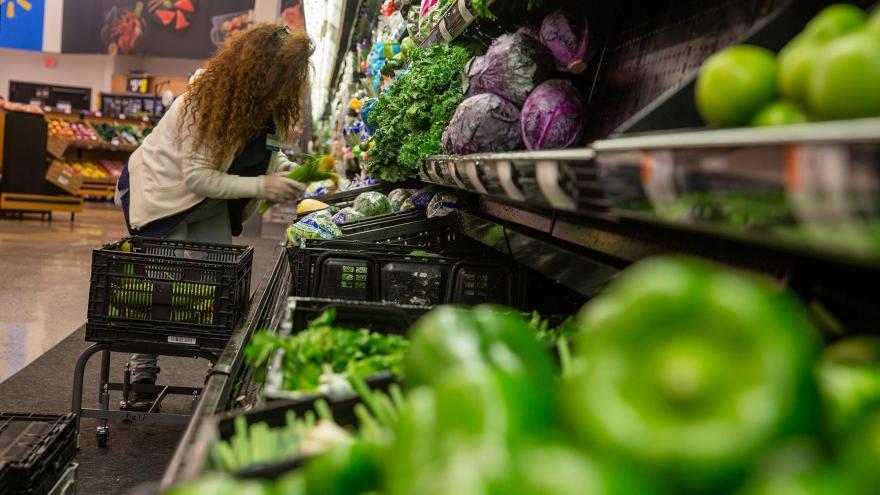 An employees stocks the produce section on the eve of the store reopening.

A banner that read #ELPASOSTRONG was unveiled at the reopening ceremony, and a store manager raised an American flag on the roof.

Dozens of employees and residents applauded before heading into the store, which opened about 8:45 a.m. (10:45 a.m. ET).

As customers entered, employees cheered in unison, welcoming each customer and sharing handshakes and hugs.

Gilbert Serna, 36, thanked customers, including one wearing an El Paso Strong bracelet. On the day of the shooting, he led nearly 100 people out the back to safety before returning to the parking lot to help others.

Before the Walmart opened Thursday, Serna stood next to his brother in the parking lot surrounded by colleagues. His brother also works at the store. They erupted in applause when the banner was unveiled atop the building's facade.

"Let's do this!" an employee yelled as the crowd walked inside.

Richard Madrigal lives a few block away. A fixture at the store, he arrived with a grocery list in hand. He put potatoes, bottled water, eggs and canned corn in his cart, as he greeted and hugged employees he hasn't seen in weeks.

Madrigal wasn't there the day of the shooting, but he's been shopping there for 22 years. He promised the store employees he'd be back soon and bring them a holiday treat, just like he does every year.

"I already told my wife I'll be bring you my pumpkin cranberry bread soon," Madrigal told Maria, a cashier.

Josefina Mireles was pushing a shopping cart near the meat section when she had to stop to wipe away tears. Mireles had driven from Juarez, Mexico, to shop at the Walmart on August 3, the day the shooting unfolded.

She escaped unharmed, but the nightmares have not stopped.

"I'm here because my therapist told me I should come," she said.

A passing store associate stopped to hug Mireles and thanked her for coming back. The employee told her it hadn't been easy for the Walmart staff when they returned to the scene of the massacre, either.

A memorial for the victims of the violence is scheduled to be completed next week. The tall white pillar was visible behind construction barricades.

The Grand Candela, as it's called, will feature 22 perforated aluminum arcs grouped into a single 30-foot monument "symbolizing unity and emanating light into the sky," Walmart said.