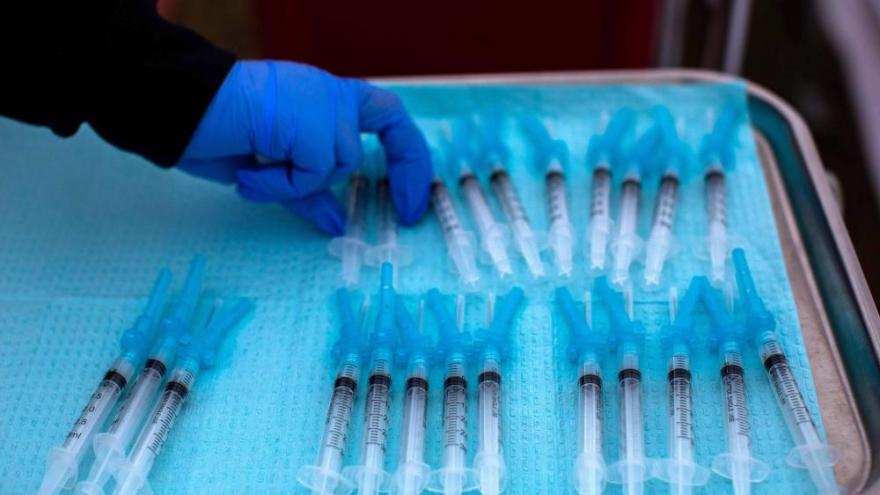 Russia's intelligence agencies have been working to undermine confidence in the development, safety and efficacy of two of the coronavirus vaccines being used in the US. A nurse is shown taking a Moderna Covid-19 vaccines ready to be administered at a vaccination site at Kedren Community Health Center, in South Central Los Angeles, California on February 16, 2021.

(CNN) -- Online platforms directed by Russian intelligence are spreading disinformation about two of the coronavirus vaccines being used in the US, a State Department spokesperson confirmed to CNN on Sunday.

The agency's Global Engagement Center identified three Russian outlets -- News Front, New Eastern Outlook and Oriental Review -- that are spreading not only misinformation about the virus, but also regarding "international organizations, military conflicts, protests; and any divisive issue that they can exploit," according to the spokesperson.

"These sites all vary in their reach, tone, and audience -- but they all are spreading Russian propaganda and disinformation. The State Department's finding of a link between these sites and Russian Intelligence is a result of a joint interagency conclusion," the spokesperson said.

The GEC leads efforts "to recognize, understand, expose, and counter foreign state and non-state propaganda and disinformation efforts aimed at undermining or influencing the policies, security, or stability of the United States, its allies, and partner nations," according to its website.

The Wall Street Journal first reported on the disinformation.

The campaign comes as the US and other countries race to vaccinate people using three vaccines developed in record time by the drug makers Pfizer/BioNTech, Moderna and Johnson and Johnson. US officials have been working to increase confidence in the drugs in recent months as studies showed a concerning level of vaccine hesitancy among some people, though that has decreased as the rollout has progressed.

A spokesman for the Kremlin denied to the Journal that the country's intelligence services were spearheading the disinformation campaign.

"It's nonsense. Russian special services have nothing to do with any criticism against vaccines," the spokesman, Dmitry Peskov, told the newspaper.

"And we will reiterate at every opportunity that these vaccines are safe; they've been approved by the FDA. We will have, of course, health and medical experts conveying that at every turn, and we will look for ways to combat disinformation," Psaki added. "But we are aware of it. We are monitoring it. And we are taking steps to address."

The Journal reported that, "Russian state media and Russian government Twitter accounts have made overt efforts to raise concerns about the cost and safety of the Pfizer vaccine in what experts outside the US government say is an effort to promote the sale of Russia's rival Sputnik V vaccine."

"The emphasis on denigrating Pfizer is likely due to its status as the first vaccine besides Sputnik V to see mass use, resulting in a greater potential threat to Sputnik's market dominance," a forthcoming report by the Alliance for Securing Democracy says, according to the Journal.

One outlet in the disinformation campaign, News Front, used international reports to play "up the risk that a person who receives the Pfizer or Moderna Inc. vaccines could contract Bell's palsy, in which facial muscles are paralyzed," according to the Journal, which noted that while a small number of side effects have been reported by vaccine recipients, the shots are overwhelmingly safe and effective.

Pamela Eisele, a spokeswoman for Pfizer, told the newspaper that so far, "millions of people have been vaccinated with our vaccine following the endorsement of regulators in multiple countries."

A spokeswoman for Moderna didn't immediately respond to the Journal's request for comment.