Wall Street is starting to tune out Ukraine 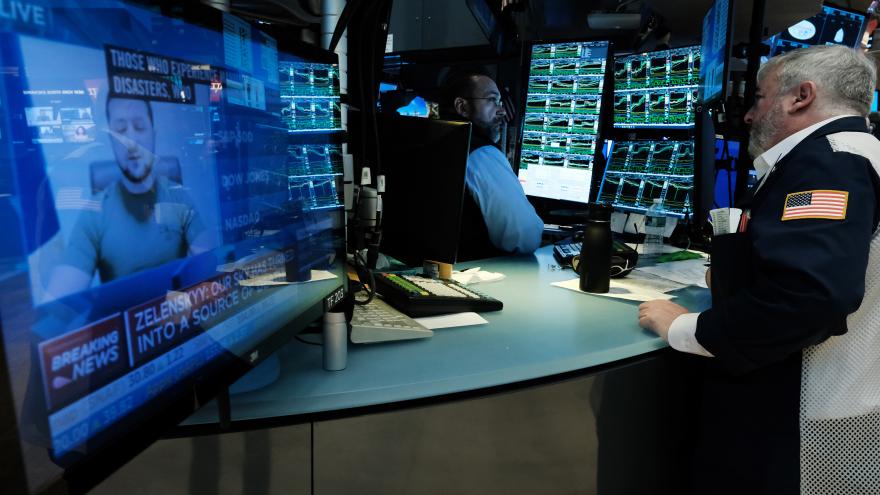 That's right. US stocks had a banner performance even as war raged on in Ukraine, Russia teetered on the brink of default and the Fed hiked rates for the first time since 2018.

The International Energy Agency also warned this week of the biggest oil supply crisis in decades. Analysts are worried that war in Ukraine could result in global food shortages. The West continues to announce new sanctions targeting Russia.

Energy, metals and currency markets have responded to these seismic events with wild swings. Nickel prices have dropped sharply following a trading halt in London that lasted a week.

But stocks are charting their own path, suggesting that investors may be starting to tune out the war in Ukraine.

"In the end, most asset classes seemed to throw their hands up and go with whatever suited their narrative," said Jeffrey Halley, senior market analyst at OANDA.

The "perpetually bullish gnomes of the equity market" pushed stocks higher on Thursday after positive US manufacturing and labor market data, he added.

Yet there may be some logic behind the stock moves.

Enter the Fed: The US central bank struck a more hawkish tone at its meeting this week than many investors expected. The median forecast from policymakers is now for seven rate hikes this year, and three more in 2023.

Fed Chair Jerome Powell convinced investors that the US economy is strong enough to withstand higher rates. Economic data has continued to strengthen, he said, and the labor market is very tight.

The bond market suggests that weaker growth is ahead. But a recession, if it comes, could still be years away.

Stocks often rally when the Fed starts hiking interest rates. Since 1983, the S&P 500 has returned an average of 5.3% in the six months following the first Fed rate rise of a cycle, according to UBS.

"We advise investors to prepare for higher rates while remaining engaged with equity markets. We prefer a hedging strategy and selective equity exposure over exiting risk assets," the bank's analysts wrote.

Energy stocks provide a hedge against risks from the war in Ukraine, they said. Financial stocks also tend to rise when interest rates move higher.

There are signs that Russia may avoid default ... for now.

Some of the creditors who had been waiting on $117 million in Russian interest payments since Wednesday have now received the funds, according to Reuters, which cited anonymous sources.

Moscow attempted to make the payment earlier this week, but bondholders did not immediately receive the money due to "technical difficulties related to international sanctions," S&P Global said in a statement on Thursday.

JPMorgan has processed the payments, and passed them to Citigroup, the payment agent responsible for distributing the money to investors, the Financial Times reported.

If all investors don't get their money before a 30-day grace period expires, that would be considered a default. Russia hasn't missed an international debt payment since the Bolshevik revolution.

But it's not out of the woods, yet.

"We think that debt service payments on Russia's Eurobonds due in the next few weeks may face similar technical difficulties," said S&P. "At this point, we consider that Russia's debt is highly vulnerable to nonpayment."

S&P has slashed its rating on Russian sovereign debt to CC from CCC-, which is just two notches above default.

Up next: Russia has to make debt payments totaling $168 million on March 21 and March 28, but creditors agreed to accept euros, pounds, francs or rubles as payment when they bought those bonds.

The next big tests come on March 31, when Russia has a payment of $447 million, and April 4, when it has to cough up more than $2.1 billion on two securities. Those payments can only be made in dollars.

The end of cheap mortgages

Mortgage rates have climbed above 4% for the first time since May 2019, a sign that the era of super cheap home loans may have ended.

The 30-year fixed-rate mortgage averaged 4.16% in the week ending March 17, up from 3.85% the week before, reports my CNN Business colleague Anna Bahney.

Fed action: Rates climbed as the Federal Reserve moved to curb soaring inflation. On Wednesday, the central bank announced it would raise interest rates for the first time since 2018.

Mortgage rates are not directly tied to the federal funds rate. Rather, they track the yield on 10-year Treasury bonds, which are influenced by factors including investors' reactions to the Fed's moves and inflation.

Rising inflation and the uncertainty in Ukraine are also impacting rates.

"Inflation is unlikely to slow down any time soon," said George Ratiu, Realtor.com's manager of economic research. "Investors are reacting to the deepening war in Ukraine and expecting renewed supply chain disruptions to add additional pressures on consumer prices."

All these factors will continue to push mortgage rates higher in the months ahead, he said. That means one of the main drivers of home sales over the past two years — super low mortgage rates — is drying up.

"The days of sub-3% interest rates are firmly behind us, and we have yet to solve the market fundamentals of supply and demand," said Ratiu.