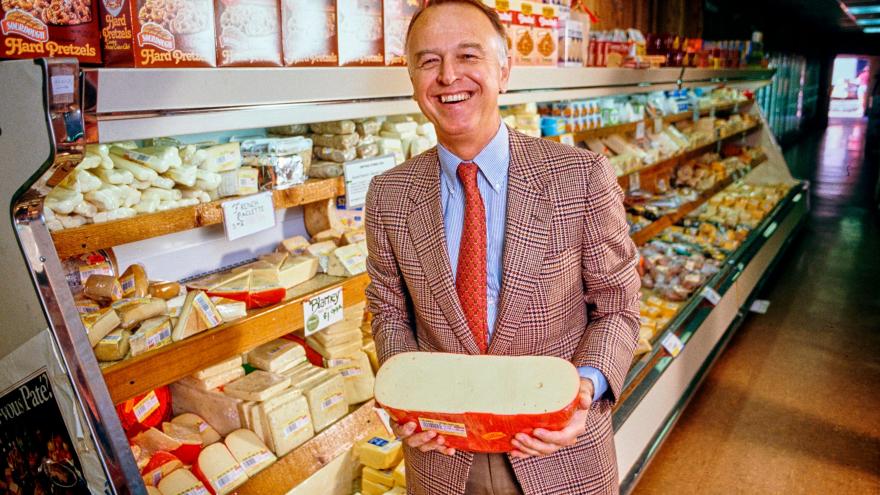 (CNN) -- Turns out Trader Joe was a real guy, and his shrewd instincts led him to create a counter-culture grocery empire.

Joe Coulombe, a struggling convenience store owner in Los Angeles, decided in 1967 to open a grocery chain to appeal to the small but growing number of well-educated, well-traveled consumers that mainstream supermarkets were ignoring.

"I have an ideal audience in mind," he told the Los Angeles Times in 1981. "This is a person who got a Fulbright scholarship, went to Europe for a couple of years and developed a taste for something other than Velveeta" ordinary beer and Folgers coffee, he said.

Coulombe recognized that international travel was about to explode thanks to the new Boeing 747 hitting the market. For the name of his new store, Coulombe landed on Trader Joe's to evoke exotic images of the South Seas. The name was inspired by Trader Vic's, a popular Tiki Bar restaurant started in California.

One marketing expert thought it was a terrible name -- "Trader" was "something associated with selling defective horse flesh," Coulombe said in his memoir, "Becoming Trader Joe," published in 2021, a year after he died at age 89.

But it stuck, and the first Trader Joe's opened in Pasadena, California, in 1967. The location was ideal for his new target customer, surrounded by college campuses, a hospital and big engineering firms.

"He was a grocery outsider who was able to see things differently," said Benjamin Lorr, author of "The Secret Life of Groceries: The Dark Miracle of the American Supermarket." "He wanted to tap into this idea that food was exploration, that food was travel and adventure."

The first Trader Joe's store had a nautical theme with marine artifacts including a ship's bell, fish netting and half of a rowboat. The check out counter was an island with a roof. Employees wore Polynesian shirts and Bermuda shorts. The manager was called captain and the assistant was first mate. And lilting Hawaiian music played over the loudspeakers.

But the merchandise looked nothing like what you'd find at a Trader Joe's today.

The original store had a typical convenience shop assortment of groceries, along with discounted magazines, books, socks and hosiery, records and photo finishing. The big draw, however, was the alcohol selection.

California had Fair Trade laws on alcohol, so manufacturers set minimum prices and it was illegal to go below them. Since Coulombe couldn't compete by offering low prices, he recognized he had to offer a wide variety to stand out.

The first Trader Joe's boasted of having the world's largest assortment of alcohol -- 100 brands of Scotch, 50 brands of bourbon and gin and 14 types of tequila.

Coulombe eventually found a loophole in California's Fair Trade laws that allowed his shop to import high-end French wine and sell it for lower prices than competitors, helping him reach wine connoisseurs. (It would not be until years later that Trader Joe's released its famous $1.99 Charles Shaw wine, known as "Two-Buck Chuck.")

By the early 1970s, Coulombe seized on the growing health food movement, believing it would appeal to the same type of customers who also happened to be wine connoisseurs.

"His ideas on marketing groceries came from his marketing of wine," Benjamin Lorr said.

Trader Joe's first private-label product was granola, and then it started adding fresh squeezed orange juice, vitamins, nuts and dried foods and cheese. At one point, Trader Joe's was the largest US importer of brie.

Coulombe became immersed in the health food culture in Berkeley and San Francisco.

"I hired a young hippie woman out of the University of California at Santa Cruz to teach us the lingo," he said.

In 1977, Coulombe remade Trader Joe's again -- setting it on a path that would be more familiar to today's customers.

In response to the end of Fair Trade laws on alcohol in California and other price controls, Trader Joe's needed new ways to grow profit and stay competitive. It eliminated most household basics and cleaning essentials and focused on food. It also slashed the number of items it carried and moved to largely selling private-label items.

"As we evolved Trader Joe's, its greatest departure from the norm wasn't its size or its decor," Coulombe said. "It was our commitment to product knowledge, something which was totally foreign to the mass-merchant culture, and our turning our backs to branded merchandise."

The company even positioned its private-label names and branding to connect with well-educated shoppers -- Brandenburg Brownies and Sir Issac Newtons, for example -- Coulombe said.

Creating strong private-label offerings to rival national brands would be one of his legacies in the supermarket industry, said Lorr. "That changed the balance of the grocery industry. Suddenly, grocers are empowered in a way they weren't."

But Coulombe resisted opening up dozens of new stores.

The handful of stores Coulombe did open were in Southern California, which fit the demographic profile he was seeking -- teachers, musicians, journalists and other professionals.

Aldi executives would travel from Germany to visit Trader Joe's about once a year, but they took a hands-off approach to overseeing the growing chain.

By the time Coulombe stepped down as chief executive in 1988, Trader Joe's had 27 California stores and an estimated $150 million in sales.

It would be his successor as chief executive, John Shields, a former fraternity brother at Stanford, who led Trader Joe's out of California and turned it into a national chain. In 1996, Trader Joe's opened its first two stores on the East Coast, both in Boston suburbs.

By 2020, Trader Joe's had more than 530 stores and an estimated $16.5 billion in sales, according to the latest data available from Supermarket News.

"My successors at Trader Joe's have taken a 30-store chain nationwide with remarkable adherence to the basic concepts we started out with," Coulombe said in 2010.