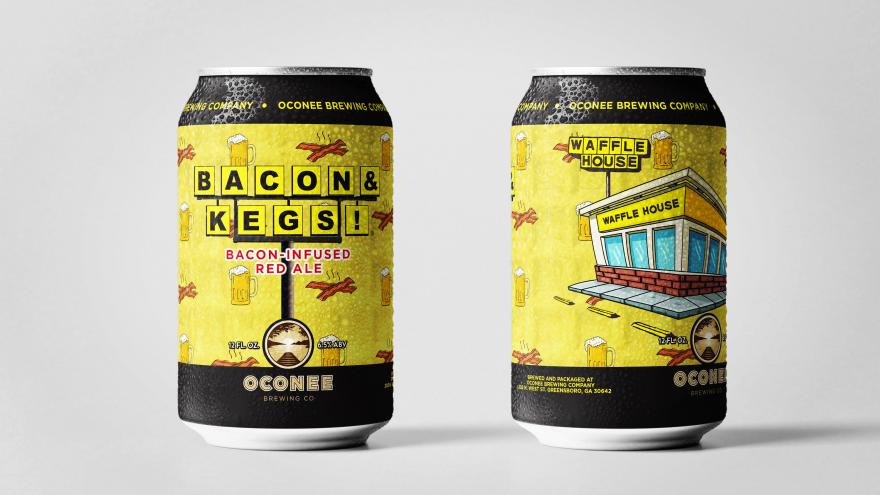 (CNN) -- Bacon and beer is a match made in heaven. Bacon beer, on the other hand, could be something even better.

Leslie Tillery, Oconee's media director, said the collaboration first came about after she reached out to Waffle House in January to gauge interest in collaborating on a beer.

"We knew that Waffle House had dipped their toes (or dipped their hash browns, as I like to say in this situation!) into the industry when they allowed beer at their Braves stadium kiosk in 2018," Tillery told CNN in an email. "I thought (hoped) that they might be interested in craft beer collaboration, so I found an email address for someone at corporate headquarters and proposed the idea. He was kind enough to respond with willingness to discuss the idea more!"

A couple of months ago, a group of executives from Waffle House were then invited over to the brewery for a taste test, Tillery said.

"The red ale was one style of several that our Brew Master, Taylor Lamm, gave them to sample. Bacon extract was added and Bacon & Kegs was born!

Oconee brew master Taylor Lamm had a number of beers on hand to sample, including a red ale.

After discussing flavors that were synonymous with Waffle House, Lamm added bacon extract to the brew -- "and Bacon & Kegs was born," Tillery said.

The beer will be available at the brewery starting on December 18 in six packs and on draft, which will include growler fills of the beer.

Oconee Brewing Company first opened in May of 2017, and the brewery is housed in a renovated cotton mill warehouse in Greensboro, Georgia.

Waffle House first opened in 1955 in Avondale Estates, Georgia, and now has nearly 1,900 locations across 25 states, according to its website.