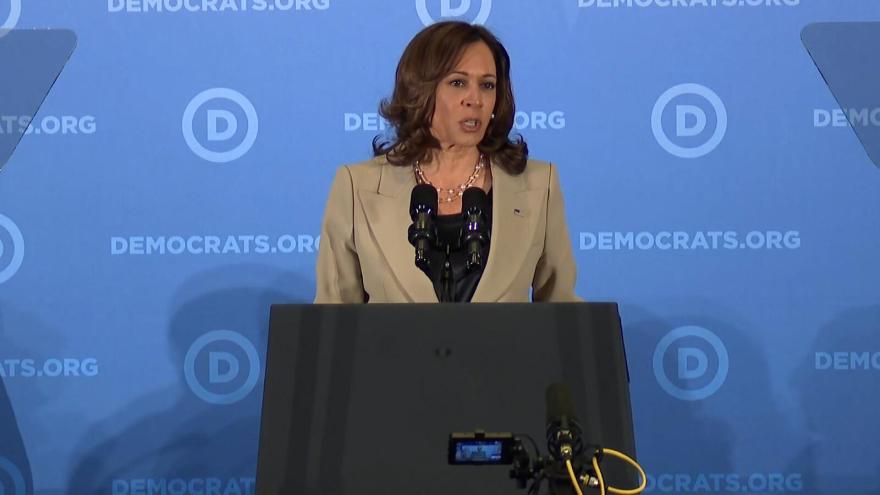 "We refuse to let extremist, so-called leaders dismantle our democracy," Harris told attendees in National Harbor, Maryland, referring to more extreme wings of the GOP, which Biden has described as "MAGA Republicans." At a speech last month, the President compared the philosophy of such Republicans to "semi-fascism," which prompted calls by GOP leaders for him to apologize.

In her speech Saturday, Harris said that the "threats we face as a nation are great -- threats to our freedom, threats to our very democracy -- and we need to speak truth about that."

Referring to the US Supreme Court decision that overturned Roe v. Wade, the vice president said: "Right now, extremist, so-called leaders are trumpeting the rhetoric of freedom while they restrict and systematically attempt to take away freedoms."

Laws that ban abortion or severely restrict the procedure have gone into effect in about a dozen states since the Supreme Court ended the federal constitutional right to an abortion. But the high court's decision has also energized Democrats for the midterm elections, amid Biden's low approval ratings and concerns about the state of the economy.

"On the subject of choice and what the Dobbs decision has done and what it means -- it's an important point to acknowledge that you don't have to abandon your faith, or your beliefs to agree that the government should not be making that decision for her. And thank you, Kansas," Harris said.

Kansas voters in August chose to reject a state constitutional amendment that would have allowed lawmakers to help enact more restrictive abortion laws in the state. Democratic candidates in other states have also beaten expectations in recent special House elections since the Supreme Court ruling, including holding a seat in upstate New York and flipping Alaska's at-large district.

Harris repeatedly stressed Saturday that "the stakes could not be higher."

Harris vowed that if Democrats retain their majorities in Congress, they will codify Roe v. Wade and pass the John Lewis Voting Rights Act.

"This is a pivotal moment in our nation's history, and make no mistake, this election is how we rise to meet it," she said.