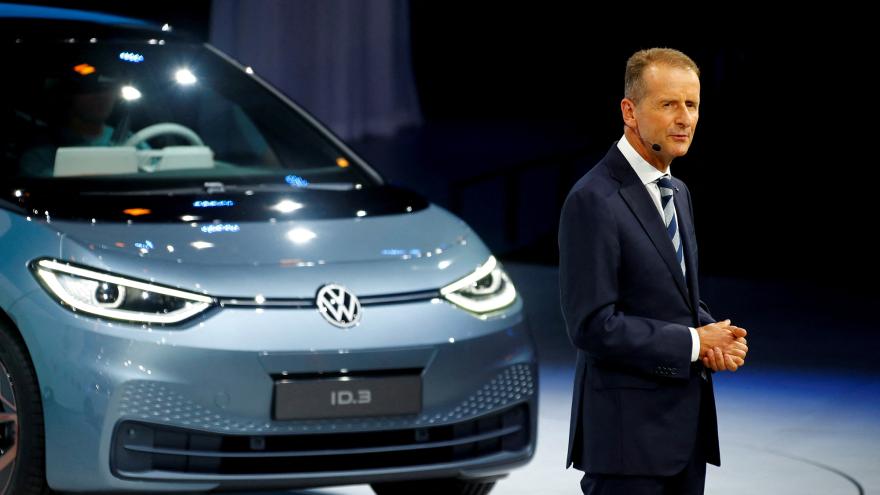 (CNN) -- Volkswagen's CEO is leaving his post in a surprise move, effective September 1.

The company announced Friday that CEO Herbert Diess will be replaced by Oliver Blume, the head of Volkswagen's Porsche performance car division.

Volkswagen, the world's second largest automaker, did not provide a reason for Diess' exit.

But a Reuters report citing unnamed sources said the Porsche and Piech families — who between them own a majority of the voting rights in Volkswagen — pressed for a change at the helm. The company did not immediately respond to a request for comment on that report.

It was a busy and challenging tenure for Diess. He took the reins at Volkswagen in 2018, in the wake of its "dieselgate" scandal that forced the company to pay massive US and European fines for deceptive emissions readings.

Still, he was able to put that scandal mostly in the company's rearview mirror. And he focused on electric vehicles more than many established automakers, positioning Volkswagen for a major shift.

VW has said it will spend €89 billion over the next five years on developing EVs, about half of its planned spending in that time, and it's aiming for EVs to represent a quarter of sales by the end of 2026.

The number of battery EVs that VW sold nearly doubled in 2021 to nearly 453,000 globally, vaulting it to No. 3 behind only Tesla and General Motors in pure EVs sold — and most of the latter's sales came from a Chinese joint venture. VW outpaced all other automakers, including Tesla, in European EV sales at 310,000 vehicles.

Tesla still sold more than twice as many pure EVs as VW did in 2021 — and EVs represented only 5% of the vehicles VW sold last year — but the shift in focus under Diess was important for the company's future plans.

"Herbert Diess played a key role in advancing the transformation of the company. The group and its brands are viable for the future; its innovative capabilities and earning power are strengthened," Hans Dieter Pötsch, chairman of the company's board, said in a statement. "Not only did he steer the company through extremely turbulent waters, but he also implemented a fundamentally new strategy."

But not all was rosy. While Volkswagen may be further along than most traditional automakers in the planned switch to electric vehicles, it has fallen further behind Toyota in the race for total vehicle sales — a key metric in this sector.

What's more, Volkswagen shares have also lagged under Diess, gaining only about 10% since he was named CEO in 2018 — far below Toyota's 60% gains in that time. So far this year, Volkswagen's Germany-listed shares are down 28%.