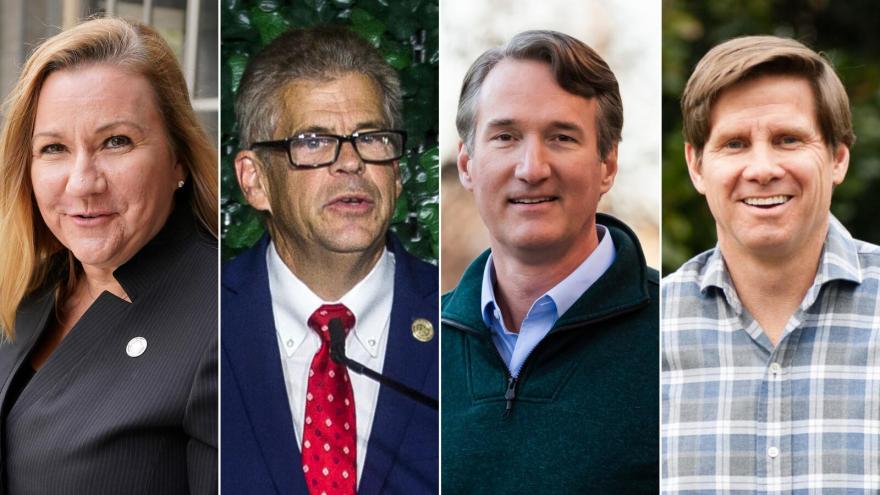 (CNN) -- As Virginia Republicans try to win their first race for governor in more than a decade, the party is selecting their standardbearer this weekend -- a decision that will suggest where the national party is heading as it seeks to gain back power in Washington after former President Donald Trump's defeat in November.

The nomination for governor remains wide open as more than 50,000 delegates headed to what the state party calls an "unassembled" convention on Saturday, meeting at 39 locations across the state as necessitated by Covid-19 restrictions.

At one site, in Fairfax County in suburban Northern Virginia, a steady line of cars snaked through the parking lot of a community college for most of the day. Delegates waited to collect, fill out and return their ballots -- all without needing to leave their vehicles.

The "drive-in" process is unusual for a Republican nominating convention, and there were a few signs of confusion from delegates about how to cast their ballots. Volunteers at the Fairfax County site at times struggled to direct delegates' cars to the proper lane for turning in their filled ballots. For some drivers, the entire exercise -- from getting in line to casting a ballot -- took around one hour.

Four of the seven gubernatorial candidates are considered those most likely to win the nomination and challenge the Democratic nominee this November. But with the party using a ranked-choice voting method that requires the winner to receive 50% of the vote, there remains no clear favorite.

Among the top GOP candidates are businessmen Glenn Youngkin and Pete Snyder, both of whom have led the field in campaign spending -- chiefly on ads going after each other as competing "outsider" candidates. Former state assembly speaker Kirk Cox has the most experience in elected office and, along with Snyder, has the most establishment support. And state Sen. Amanda Chase, a pro-Trump gadfly who revels in being known as a "firebrand" and "politically incorrect," has a small, loyal following.

At the Fairfax County site, Stephanie Myers of Alexandria, a first-time delegate, told CNN she had been leaning toward Cox because she liked his decades of experience in the state assembly but that she had been convinced to give her top spot to Youngkin after hearing him speak to voters in Alexandria on Friday.

"He had all the positive qualities of Donald Trump," Myers said of Youngkin, a former executive at the Carlyle Group, "and none of the negative qualities."

Myers said she would list Cox as her second choice.

This year's race to replace Democratic Gov. Ralph Northam, who is prevented by Virginia's one-term limit from seeking re-election, will be seen as a test of the nation's political climate nearly one year into Joe Biden's presidency.

Virginia law allows parties to choose between selecting their nominees for statewide offices in party-run conventions or in state-run primaries. Democrats are holding a primary on June 8, where former Gov. Terry McAuliffe is among the leading candidates. The leftward shift of Virginia's suburbs around Washington, DC -- a trend vividly on display in Northam's 2017 victory and in recent Democratic presidential wins in the state -- is likely to make Democrats the favorites to hold the governor's office in Richmond.

Despite this shift and the uncertainty about who the GOP nominee will be, observers say the Virginia party has an opportunity this year to win in a state that has frustrated Republicans for years.

"Republicans are poised for a massive comeback in legislative races as long as Donald Trump stays off the headlines," said Chris Saxman, a former Republican state delegate who writes a political newsletter.

Saxman and others say Republicans who can push back on the gains Democrats have made in Virginia's suburbs in Richmond and Northern Virginia can make the state competitive again for the GOP.

"If this weekend produces a more 'center-right' nominee who can appeal to the suburbs, this race could be a lot closer than many anticipate," said Tucker Martin, a former aide to the last Republican governor of Virginia, Bob McDonnell.

Nevertheless, the direction of the pre-convention campaign suggests support for Trump remains a core requirement for success in the Republican Party, even amid GOP fears that the association hurts the party in statewide elections. Trump will not endorse before the convention, said a person close to the former President, leaving the space for appealing to Trump's voters wide open.

To that end, Youngkin, Snyder and Cox have all embraced some form of "election integrity" as an issue -- threading the needle of acknowledging Republican concerns about the integrity of the vote without fully embracing Trump's false claims about a stolen 2020 election.

Snyder has run TV ads, for instance, promising to "stop liberals from rigging the system" and supporting "voter ID and verification of all ballots." Cox has also talked up voter ID and has called for a bipartisan election board.

And both Youngkin and Snyder in particular have tried to draw on support from figures in Trump's broader political world. Several members of Youngkin's staff are veterans of Trump's presidential campaigns. He has also run a TV ad with footage of Trump praising Youngkin by name during a White House event on trade.

Chase, on the other hand, spoke at the January 6 "Stop the Steal" rally in Washington that preceded the violent riot at the US Capitol, and she has aligned herself with the former President explicitly by calling herself "Trump in heels."

Republican observers say her extreme position limits her ability to gain a majority in a convention, but her connection to the party's pro-Trump base has pulled the rest of the field to the right.

"The winner of the so-called convention could be the candidate with the best ability to package disinformation and culture wars into a digestible mental snack," said Denver Riggleman, a former Republican congressman from Virginia who has emerged as a critic of conspiracy theories about the 2020 election.

Many of the Republican candidates for governor made unusual pitches ahead of the convention, asking to be delegates' second-favorite candidate if not their top choice.

The Virginia GOP is using ranked-choice voting to select their candidates for governor, lieutenant governor and attorney general. The method could make second- and third-place votes just as important in determining the nominee as first-place votes. Delegates cast a single ballot, with the candidates ranked one through seven.

This time, though, several of the Republican candidates made appeals ahead of the voting to become the second-place preference of their rivals' supporters.

"I understand I might not be everyone's first choice," Cox said in a recent online ad. "But if I'm not your first choice, I'd really appreciate you putting me down as your second."

Cox and Youngkin -- who has told event attendees he'd like to be their second choice if he isn't their first -- have used public forums to muse about roles the other could serve in their administrations. Youngkin said he would want Cox as his education secretary, while Cox said he'd tap Youngkin as secretary of commerce and trade.

"Even if Pete is not your first choice, you can vote to make him your second choice," Cuccinelli's email said.

Taking a difference approach is Chase, who urged her supporters to fill her name in on all seven lines -- which is functionally the same as casting a first-place vote and nothing else.

This year's convention follows a decade in which the GOP collapsed in Virginia. Republicans have not won a statewide election since 2009 and lost their state legislative majorities. One previous trend would have been in the GOP's favor: Since the 1970s, the winner of Virginia's off-year gubernatorial election always came from the opposite party of the previous year's winning presidential candidate. But that changed in 2013, when McAuliffe was elected Virginia's governor a year after Barack Obama won a second White House term.

GOP party officials feuded in late 2020 and early 2021 over whether to hold a convention or a primary, leaving decisions about when and how to select a gubernatorial nominee unsettled for months. Some delegates in Fairfax County were still upset about the choice to use a convention.

"I'm a primary guy," said one man from his car before speeding off to keep his place in line.

The decision to hold a convention is seen as damaging to Chase, in particular. She's faced criticism in the state Senate for pushing Trump's lies about the outcome of the 2020 election and calling those who rioted at the Capitol on January 6 "patriots." She has been required to sit inside a plexiglass box on the Senate floor over her refusal to wear a mask. In a divided field in which only first-place votes mattered, she could have emerged with a plurality of support from die-hard Trump loyalists.

Many Republicans do not expect Chase to be a dominant second-choice candidate, but the limited public polling of the race means the race to get a bare majority of delegates, and the GOP nomination, could be anyone's.