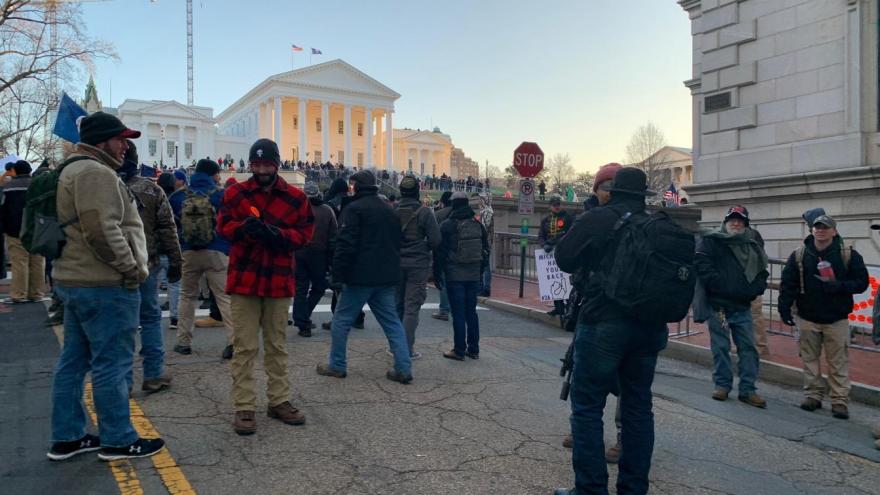 Several photos of heavily armed people at Lobby Day in Richmond, VA. These people are outside the secure weapon-banned area.

(CNN) -- A large gun-rights rally in Virginia's state capital unfolded peacefully Monday despite earlier fears of the kind of violence that took place in nearby Charlottesville three years ago.

Security was tight as gun-rights advocates descended on Richmond for "Lobby Day" to oppose legislation that would restrict access to firearms in the state. The commonwealth braced for the potential of extremist and white nationalist groups to disrupt the peaceful demonstrations with violence and riots, and the state's Democratic governor, Ralph Northam, declared a temporary state of emergency last week to ban open and concealed firearms and other weapons from the state capitol grounds.

The crowd, however, was peaceful, with no immediate reports of violence. One person was arrested with one felony count of wearing a mask in public. A 21-year-old woman was arrested and charged after having been warned two times not to wear a bandana over her face and then arrested when an officer saw her wearing it a third time, police said.

Some streets surrounding the capitol grounds, several of which were closed ahead of the event, were packed with protesters. About 22,000 people attended the rally, according to the Virginia Division of Capitol Police. That includes about 6,000 people in the official rally area and 16,000 outside.

Virginia Gov. Ralph Northam, a Democrat, welcomed the fact that the day passed without serious incident.

"Thousands of people came to Richmond to make their voices heard. Today showed that when people disagree, they can do so peacefully," Northam said in a statement. "The issues before us evoke strong emotions, and progress is often difficult. I will continue to listen to the voices of Virginians, and I will continue to do everything in my power to keep our Commonwealth safe."

In addition to the people on the capitol grounds, there was a large group outside the fenced area, which was not under the ban on weapons and is an open carry area. They were chanting "Northam out" and outnumbered the group on the capitol grounds. There was a heavy police presence among this crowd, and law enforcement could also be seen on the rooftops, providing extra security to the area.

"We came unarmed ... this time," one read. "Patriots unite! They ban, we fight," read another.

A petition was circulating calling for Northam's recall, an effort unlikely to succeed given that it would require the signatures of hundreds of thousands of registered Virginia voters to trigger a court process.

Manny Vega of Richmond, who was outside the secured area, said he and his fellow protesters were "here to represent every citizen here that wants to keep the right to bear arms."

Speakers at the event concluded their remarks around noon, and crowds began dispersing shortly afterwards.

People began lining up around 6 a.m. ET to go through security, an hour before gates to the capitol grounds were opened. Security was very thorough, as officers went through bags and made people remove their jackets to be searched despite the frigid temperatures. Law enforcement confiscated items like lighters as people passed into the secured area.

State Capitol Police urged attendees on social media that if they "SEE SOMETHING, SAY SOMETHING," and posted a list of prohibited items.

Despite fears of potential violence, President Donald Trump urged his followers to stand up to state Democrats' gun control efforts.

"The Democrat Party in the Great Commonwealth of Virginia are working hard to take away your 2nd Amendment rights," Trump tweeted late Monday morning. "This is just the beginning. Don't let it happen, VOTE REPUBLICAN in 2020!

According to Northam, law enforcement had learned of credible threats of violence surrounding Monday's rally, made from mainstream and alternative dark web channels used by violent groups and white nationalists outside of Virginia.

That led the Democratic governor to issue a temporary state of emergency last week through Tuesday, banning open and concealed firearms and other weapons from the state capitol grounds.

When announcing the ban on Wednesday, Northam said he hoped to prevent incidents like the violence that erupted three years ago at the white supremacist rally in Charlottesville, which left one counter protester dead and several others injured.

On Thursday, the FBI arrested three alleged members of a white supremacist group, including two men accused of possessing a machine gun, over 1,000 rounds of ammunition and body armor parts.

Sean Restatter, 22, told CNN on the capitol grounds Monday that the protest was intended to be peaceful.

"There might be far-right and far-left groups that might be out here today, but the vast majority of the message is 'guns save lives' and we believe in the 2nd Amendment," he said.

The gun rights group -- the Virginia Citizens Defense League -- who organized protests on so-called Lobby Day said their demonstrations would be peaceful and intended to draw attention to "Second Amendment sanctuaries," or what they refer to as localities that vow not to enforce "unconstitutional" gun laws.

One of the speakers invited by VCDL included Stephen Willeford, the man who shot and chased the shooter in the Sutherland Springs, Texas, church massacre in 2017.

The group's president, Philip Van Cleave, previously told CNN that they've been attending Lobby Day since 2003 to advocate for guns rights by "law abiding citizens," and the "grassroots" effort hasn't had any incidents of violence.

Northam's executive order was quickly challenged in court by VCDL, the Gun Owners of America and three private individuals, who argued that the ban violated their rights under the First and Second Amendments. A judge upheld the governor's temporary ban on Thursday, leading them to file an appeal with Virginia's Supreme Court. On Friday, the Supreme Court of Virginia refused their petition, leaving Northam's ban in effect.

Following a mass shooting at a Virginia Beach municipal building last year, Northam called for a special session to debate gun control, but it was adjourned by Republicans without action.

But since winning control of the state legislature in November, Democrats have more successfully advanced gun control measures in the 2020 legislative session.

The Virginia Senate, along party lines, approved several gun measures last week, including background checks for private firearm transfers, limiting gun purchases to one handgun a month and allowing localities to ban firearms in public during a permitted event.

The bills now head to the Virginia House of Delegates.