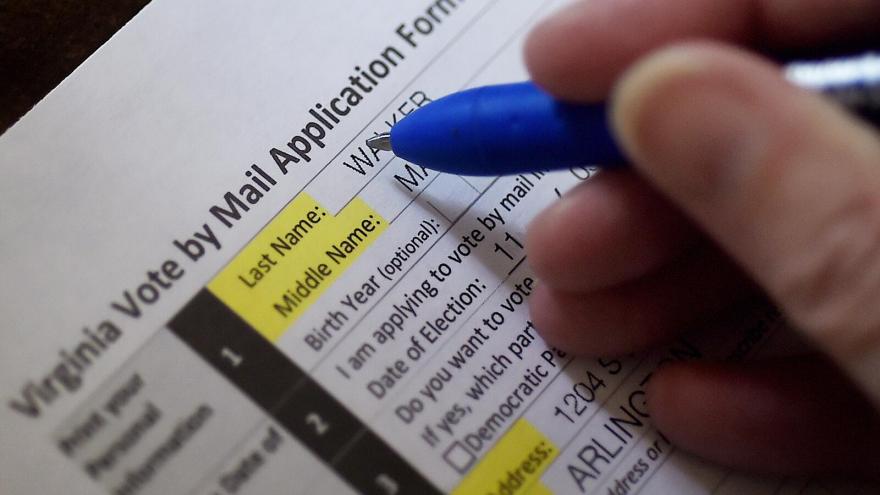 This illustration photo shows a Virginia resident filling out an application to vote by mail ahead of the November Presidential election, on August 6, 2020 in Arlington, Virginia.

(CNN) -- The Virginia Democratic Party filed a lawsuit against the US Postal Service Friday, alleging local branches failed to deliver and process election-related material ahead of its high-stakes gubernatorial race, a claim the government agency has rebutted.

The Virginia Democrats said delays "threatening to disenfranchise thousands of Virginia voters" to election-related mail across Albemarle County, which includes the city of Charlottesville, James City County, which is adjacent to Williamsburg, and the area of Portsmouth near Norfolk, are "particularly egregious," according to the lawsuit.

Friday's lawsuit was filed less than two weeks before the closely watched governor's race between Terry McAuliffe and Glenn Youngkin. Democrats are hoping to hold onto the governor's mansion and maintain control of the state legislature, while Youngkin seeks to be Virginia's first Republican to win a statewide election since 2009.

USPS told CNN it is not aware of any delays in the delivery and processing of election-related material across Virginia.

"The Postal Service has a robust and tested process for the proper handling and timely delivery of Election Mail. Our Election Mail processes and procedures are fully operational in Virginia. We are not aware of any processing delays of any ballots within our facilities nor any ballot delivery delays, and we have fully communicated this information to election officials," the USPS said in a statement to CNN.

"Throughout the election cycle we work closely with state and local election officials and have been addressing any concerns that they raise. Daily sweeps are being conducted in all our Virginia facilities," the federal agency said, noting its commitment to "fulfilling our important role in the electoral process as a secure, efficient and effective way for citizens to participate when policymakers decide to use mail as part of their election system."

According to the lawsuit filed in US District Court, "Thousands of ballots delivered to postal facilities by the general registrars weeks ago are still outstanding and, weeks later, have not yet even been scanned into USPS's system. Even if these voters do eventually receive their ballots before Election Day, the slowdowns promise that they will not have sufficient time to send them back with assurance that they will arrive in time to be counted," the lawsuit filed in US District Court says.

"And even if a ballot reaches the appropriate election official before the receipt deadline, if the official identifies any issues with it that require remediation before it may be counted, the voter will have run out of time to rectify the problem."

Voters across Virginia had until 5 p.m, ET, Friday to request a mail-in ballot to be sent to them to cast a vote in the November 2 election, according to the state's Department of Elections.

CNN has requested data from the Virginia Department of Elections as well as comment from the Republican Party of Virginia.

Virginia joined 20 other states in suing USPS last year, pushing back on the agency's changes that disrupted mail delivery across the country and triggered accusations former President Donald Trump and his appointees were trying to undermine mail-in voting.

In its lawsuit, the Virginia Democratic Party said the thousands of unscanned ballots in the three counties as of Tuesday make up more than a quarter of all ballots voters requested, based on Virginia Department of Elections data.

The lawsuit also said the average percentage of unscanned ballots across the state was 10% -- more than 25,000 ballots issued to voters -- as of Tuesday.

CNN has reached out to the three counties' election offices for comment.

James City County's director of elections, Dianna Moorman, confirmed to CNN in a statement they are "aware of the anomaly" and have been in touch with the Virginia Department of Elections and the USPS.

Moorman told CNN all the ballots the county has an application for have been issued, and the county has received more than 57% of the "USPS/email issued ballots" back from voters to date.

The three counties, which the Virginia Democratic Party allege are experiencing significant delays, all voted for President Joe Biden in the 2020 presidential election, with a slim victory for Biden in James City County.