Violent public outbursts and unruly behavior may keep some from reentering society -- but likely not for long, experts say 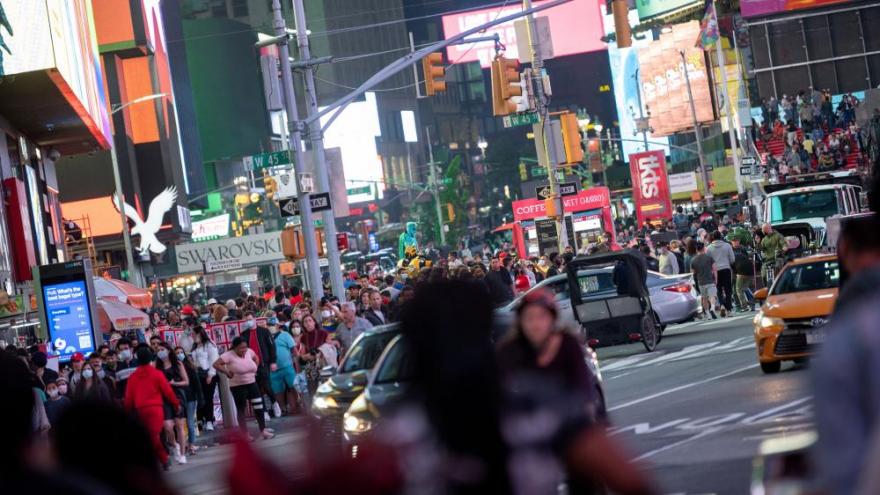 Crowds of people, mostly without masks, fill New York's Times Square on June 12. New York is among many states to pull back on Covid-19 restrictions in recent weeks.

(CNN) -- Just when you thought you were ready for a soft return to public life, this happens: An unruly plane passenger commandeers an intercom. A grocery store clerk was killed after asking a customer to pull up his mask. Countless shootings result in lives lost, others permanently changed.

And that's just in the last week.

For those who were already tiptoeing back into public spaces with some trepidation, seeing these incidents splashed across their news feeds may make them even more hesitant to live the way they did before the pandemic.

Whether these public outbursts and violence have increased recently -- the experts CNN spoke to said it's too soon to tell -- seeing so many of them is likely driving some Americans to delay their reentry into society a bit longer. But it's unlikely that anyone will write off reentry completely -- it may just take some of us a bit more time to feel comfortable again, experts told CNN.

The pandemic isn't solely to blame for unruly behavior

The stress of the pandemic and the sudden reentry into society are likely not the sole drivers of every outburst that's made news recently, said Steven Taylor, a clinical psychologist and author of "The Psychology of Pandemics," which takes a historic look at how people behave during and respond to pandemics.

It's possible that pandemic-related stress has made people more irritable and prone to eruptions of anger, said Taylor, who's also a professor at the University of British Columbia. But many of the outbursts we have read about recently were "common enough before the pandemic," he said.

For those of us who see those moments of chaos in the news or in person, it's natural to assume they're happening more often now that the world is reopening, even when that may not be true, Taylor said.

We've endured a lot of what Taylor calls "social disruption" during the pandemic -- that is, behaviors or circumstances that deviate from societal norms and might make us uncomfortable, such as "panic buying" toilet paper in bulk or nationwide protests against lockdown laws.

Given the sheer volume of social disruption we've experienced in the last year and a half, it's understandable that we'd look for correlation between the pandemic and those uncomfortable outbursts, he said, which might cause some people to hesitate about returning to life as it was before.

Reentering public spaces can put many of us on edge. Filling public spaces with people again -- people who have weathered the last year in different ways -- may increase the likelihood of incidents of chaos, said Dr. Crystal Clark of the Northwestern University Feinberg School of Medicine.

"Now that the world is reopened, we may see less patience, more irritability, less stress tolerance because people have been trying to hold it together for so long," said Clark, who is an associate professor of psychiatry and behavioral sciences and of obstetrics and gynecology. "Even though they are finally able to 'relax,' they remain on edge because the effects of the mental stress over the past year do not go away overnight."

For the same reasons that social isolation and undue stress may motivate people to act in bizarre ways when they're out in public, that isolation might cause those of us who aren't acting out to react with "excessive fear or avoidance," Taylor said.

There are also those of us whose preferences have changed during the pandemic. For people who'd rather stay home, reading about these incidents might further reinforce that they'd rather "be around people less than they were," Clark said.

Whether these moments of chaos are a direct result of the pandemic or not, seeing so many of them can make our world feel increasingly dangerous -- particularly for people who are already anxious about Covid-19 or the thought of reentering society, Taylor said.

"Fear of being the target of an angry meltdown becomes added to the list of things already feared and avoided," he said.

We've shouldered a lot of fear and anxiety since the start of 2020. This new fear -- of other people's erratic behavior -- could motivate some people to avoid contact with strangers or consider airline travel anytime soon, Taylor said.

We'll ultimately return to society at our own pace

These anxieties around encountering an outburst likely won't last forever, said Jay Van Bavel, an associate professor of psychology at New York University and director of the NYU Social Identity & Morality Lab. Now that Covid-19 infection is extremely rare for vaccinated people, it will be "hard for many people to resist" their need for social connection.

It may take weeks or months for those fears to abate, said Taylor, but they will, eventually. Humans are built to adapt -- something we've had to do time and again since the pandemic began.

"People will emerge from the pandemic at different rates," Taylor said. "Some will exuberantly resume their pre-pandemic lives whereas other people will be more circumspect, taking more time to become comfortable in resuming air travel or going to public spaces."

Taylor, Clark and Van Bavel all agree that though it may take some of us longer to feel comfortable in public again, most of us will get there. The world will still be waiting -- no matter our pace.