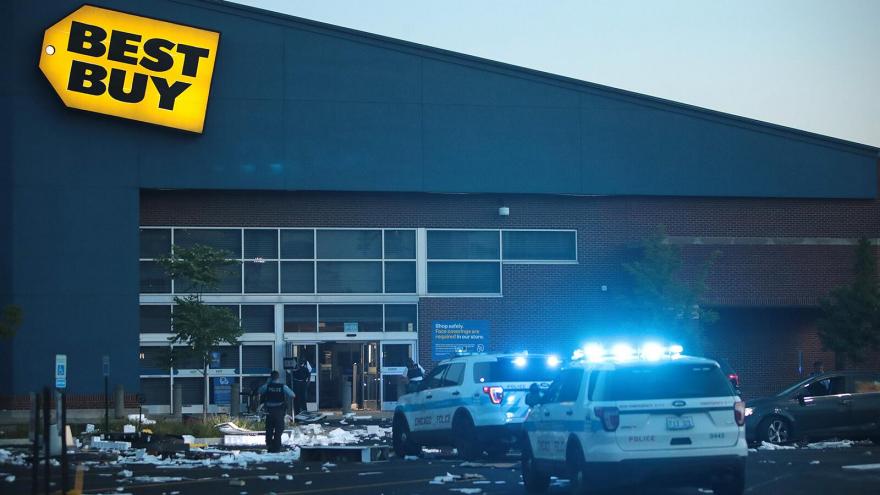 Police officers inspect a damaged Best Buy store on August 10, 2020, after parts of Chicago had widespread looting and vandalism.

And those charged with keeping communities safe and helping flatten the curve of death are under fire and losing confidence from those they are sworn to protect.

This isn't coronavirus but a plague of violence in many American cities as murders and assaults spike during the global pandemic.

From May to June 2020, homicides in 20 major US cities increased by 37%, led by Chicago, Philadelphia and Milwaukee, according to new data from the nonpartisan Council on Criminal Justice (CCJ) think tank. Aggravated assaults jumped by 35% over the same period of time, while other types of crime were down.

In Chicago, nearly 30 people were shot and three people killed this weekend alone, Chicago Police said Sunday morning. Among those injured are a 12-year-old boy, a 14-year-old boy and two 16-year-old boys in separate shooting incidents.

The CCJ's data comes as Gallup released new public opinion polling data indicating confidence in law enforcement has fallen to the lowest level in 27 years, with just 48% of respondents indicating a positive view of those who wear the badge.

Both academic researchers and policing experts say identifying a specific reason for the sudden spike in violent crime remains elusive. It could be the result of multiple factors converging as the nation simultaneously grapples with several public safety crises.

"Crime is complicated," said Chuck Wexler, executive director of the Police Executive Research Forum, a non-profit police research and policy organization. "Murder is complicated. You have to ask yourself what has been going on in these four or five months that would indicate some theory for why this is happening."

The plague of violence

This year has been one marked by unprecedented tragedy as the nation reels from a public health crisis that has claimed more than 160,000 lives, as well as the questionable deaths of several Black Americans -- including George Floyd, Breonna Taylor and Rayshard Brooks -- at the hands of police officers.

After Floyd's death, hundreds of thousands of protesters took to the streets around the country demanding racial justice and an end to excessive use of force by police. While the overwhelming majority of demonstrations were peaceful, some incidents of rioting and looting occurred in places like Minneapolis, Chicago, New York City and Atlanta.

While CCJ researchers who examined the recent spikes in homicides and aggravated assaults say it is too soon to draw conclusions on any one contributing factor, they note that the social stress caused by the Covid-19 pandemic and recent national unrest cannot be overlooked.

"It's a time unlike any other American history," said Wexler, who noted both the coronavirus pandemic and recent calls for police reform have had an impact on law enforcement.

Wexler said the spread of the coronavirus has likely had a negative impact on both witnesses to crime coming forward, as well as law enforcement agencies themselves hampered as infections spread throughout their ranks.

"Investigations have been impacted," said Wexler, citing the New York Police Department as one organization that had dozens of officers sidelined due to illness. "If someone has shot someone else, the chances are they're probably shooting other people. So, if you can't follow up on those shootings, they'll likely continue."

As another possible contributing factor, Wexler said various incidents of social unrest have required law enforcement agencies to pull resources away from patrolling the streets to deal with looting and unrest.

"When you're spread thin like that, it has an impact on your operations," he said.

Wexler said he questioned whether the early release of some inmates over fears of Covid-19 spreading in correctional institutions could affect crime on the streets.

Still, he says, there are no easy answers to the surge in homicides and assaults noted by CCJ researchers but believes public officials must study the issue.

Distrust of the police

The global pandemic and increased murder rates are not the only issues plaguing American policing.

In a profession that succeeds or fails largely based on community support, new Gallup polling data shows public confidence in police has hit its lowest level in nearly three decades.

Around 48% of Americans said they have a "great deal" or "quite a lot" of confidence in police, down from 53% the previous year, according to the new poll.

What's behind the sudden loss of public confidence in police?

"I think the behavior that's been shown on these viral videos is not representative of the majority of police officers," Ramsey said, "but it still shows there's a problem in policing that must be addressed."

Since Floyd's death, Ramsey has been one of a number of policing professionals who have publicly condemned the actions of former Minneapolis police officer Derek Chauvin -- the former officer charged with second-degree murder after bystander video showed him placing his knee to Floyd's neck as the unarmed Black man slowly lost consciousness.

Rep. Karen Bass, a California Democrat who authored the George Floyd Justice in Policing Act -- a bill that calls for sweeping reform to policing tactics -- is not surprised that Gallup's polling shows a majority of Americans have lost confidence in police.

"I think when people witnessed the really slow, tortuous murder of George Floyd, it was just not up for debate," Bass said. "I think the American people were horrified."

"You see the man being compliant," she said. "You see the police officer -- acting with complete impunity -- looking at the camera while he is literally murdering this man. The symbolism of that was he was so arrogant about what he was doing. He thought, 'It's just a black man, nobody is going to do anything to me.'"

Bass told CNN she believes the cell phone video of the incident involving Floyd was key to helping the public understand the issue of racism in policing for themselves.

"One of the key things from an African-American perspective is we've never been believed," Bass said. "People always turned it on us." She added that people of color are often presumed to have done something wrong during police encounters.

"There is nothing worse than to not be believed and for your reality to be completely denied," Bass said. "That is beyond hurtful, and I'm not sure people understand the depths of the pain it causes when people say police officers have killed us without reason, and other people say that just didn't happen."

Staunch defenders of law enforcement reject the notion of systemic racism in policing, including US Attorney General William Barr, who has said such broad claims amount to "oversimplification." But new data on the use of force by officers continues to raise serious questions about the manner in which people of color are treated by police.

"While White and Black officers discharge their guns at similar rates in white and racially mixed neighborhoods, white officers are five times as likely to fire a gun in predominantly Black neighborhoods," the study found.

For law enforcement experts, diminished public confidence in police and increased rates of violent crime in American cities go hand in hand. They note that public safety suffers when officers throttle back their enforcement efforts.

"I think we have some police officers who may not be as proactive as they were before because they don't want to be the subject of the next viral video," said former police chief Ramsey. "That doesn't mean they are doing anything wrong, but the use of force is not a pretty thing to look at. As a result, the bad guys see an opportunity and take advantage of it, which means more robberies, rapes, and shootings."

While Ramsey believes bad cops make up only a small percentage of law enforcement, he says it's past time police departments start aggressively identifying and removing officers who should not be wearing the badge.

"We have to do a better job of weeding out officers that don't belong and people who are not psychologically fit for policing," he said.

Better training, accreditation and certifying officers against a national standard are all ways Ramsey believes police agencies should be reformed, including a basic focus on treating people with dignity.

"Officers need to understand the importance of just treating people in a respectful way," he said.

Wexler of the Police Executive Research Forum says stopping the rise in homicides in some major American cities is inextricably linked with public confidence in law enforcement.

"What we know from homicide investigations is the better relationship you have with the community, the more likely you are to get their confidence in providing support when there is a homicide," he said, citing the vital role people play in helping identifying suspects and as witnesses.

"Where you have good support from the community, you have high trust," Wexler says, "and solving homicides is going to be better."

One immediate result of the loss of confidence in law enforcement has been the growing call among some criminal justice reform advocates to defund police departments and shift resources to other types of community-based services.

In Minneapolis, local officials unanimously voted in June to begin the process of dismantling the city's embattled police department. However, there are still scant details on what a substitution for law enforcement there would actually look like.

President Trump has cited the "defund the police" movement in an attempt to project a law and order 2020 campaign agenda, even as his administration was criticized following allegations of excessive use of force by federal officers in Washington and Portland.

But even some Democrats say the issue is more nuanced than simply abolishing law enforcement.

"Nobody is going to defund the police," said House Majority Whip Jim Clyburn in an interview with CNN's Jake Tapper. "We can restructure the police forces. Restructure, re-imagine policing. That is what we are going to do."

And while certain states and local jurisdictions have taken action in the wake of George Floyd's death to reform policing tactics -- like banning of chokeholds -- some national lawmakers aren't waiting around for region by region reforms.

The legislation introduced by Bass has provisions to overhaul qualified immunity for police, prohibitions on racial profiling on the part of law enforcement and a ban on no-knock warrants in federal drug cases. The bill bans chokeholds at the federal level and classifies them as a civil rights violation, and establish a national registry of police misconduct maintained by the Justice Department.

The bill passed passed the Democratic-controlled House in June and Bass said the House is working to get the GOP-controlled Senate to consider the bill.

"If the Senate wants to come up with another bill, we can go to conference and negotiate. That's fine -- it's under discussion," she said. "But we're going to continue to push the Senate."

Although Senate Majority Leader Mitch McConnell has given no indication the Senate will take up the bill anytime soon, Bass says she remains optimistic about the future of police reform.

"I'm hopeful because of the hundreds of thousands of people who have peacefully protested, and who are continuing to raise the issue," she said.

Ultimately, Bass believes reforming policing tactics will be a win for both officers and the public.

"The police officers need help, and by help I mean they need national standards," she said.

Asked if she would recommend becoming a police officer to young people in her district, Bass said absolutely, but with one important caveat.

"The first thing I would do is ask them why they want to be an officer," she said. "There are some people who want to go into law enforcement because they want to knock heads and don't recognize this is about communities."