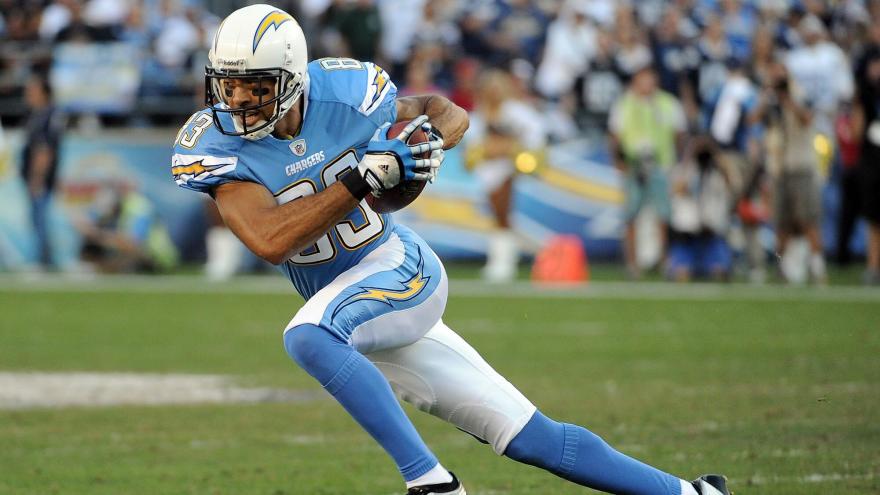 According to the Hillsborough County Sheriff's Office, the 38-year-old was staying at the Homewood Suites in Brandon, about 12 miles outside Tampa, since January 11. Pictured here Vincent Jackson turns up field after his catch against the Denver Broncos at Qualcomm Stadium on November 27, 2011 in San Diego, California.

The 38-year-old had been staying at the Homewood Suites in Brandon, about 12 miles outside Tampa, since January 11, according to a news release from the Hillsborough County Sheriff's Office.

Sheriff's Office officials said they spoke with Jackson's family members on February 10, after they had called to report that he was missing. A formal report was filed the following day.

Last Friday, officials said they located Jackson at the Homewood Suites and spoke with him, according to the news release.

"After assessing Jackson's well-being, the missing persons case was canceled," the release said.

Jackson was found dead at 11:30 a.m. Monday by a housekeeper. There were no apparent signs of trauma.

The Hillsborough County Medical Examiner's Office will determine the cause of death and officially identify Jackson's remains based on dental or DNA records, according to the news release.

"Mr. Jackson was a devoted man who put his family and community above everything else," Sheriff Chad Chronister said in a statement Monday. "Football aside, he touched countless lives through his Jackson In Action 83 Foundation. We shared a passion for supporting military families, and three years ago, Jackson was even made an honorary deputy by the Hillsborough County Sheriff's Office to recognize his dedication to the community."

"He will be sorely missed by not only football fans across the country, but also the people here in Hillsborough County who reaped the benefits of his generous contributions."

Jackson played 12 seasons in the NFL

Jackson played college football at the University of Northern Colorado where he was a standout player, according to the school.

He was drafted by the San Diego Chargers in 2005, according to the NFL. He ultimately played 12 seasons in the league, spending his first seven with the Chargers and last five with the Tampa Bay Buccaneers.

The Chargers, now based out of Los Angeles, released a statement Monday saying the team was "shocked and deeply saddened" by the news of Jackson's death.

"Vincent was a fan favorite not only for his Pro Browl play on the field but for the impact he made on the community off of it," the statement read. "The work he has done on behalf of military families through his foundation in the years since his retirement has been an inspiration to all of us."

The Buccaneers, who recently won the Super Bowl, said in a statement that Jackson was "a consummate professional" during his five years with the team.

"Vincent was a dedicated father, husband, businessman and philanthropist, who made a deep impact on our community through his unyielding advocacy for military families, supported by the Jackson in Action 83 Foundation," the statement read.

Jackson was a three-time Pro Bowl selection and was nominated four times for the Walter Payton Man of the Year award, which recognizes players who have had a positive impact on their community, according to the Buccaneers.