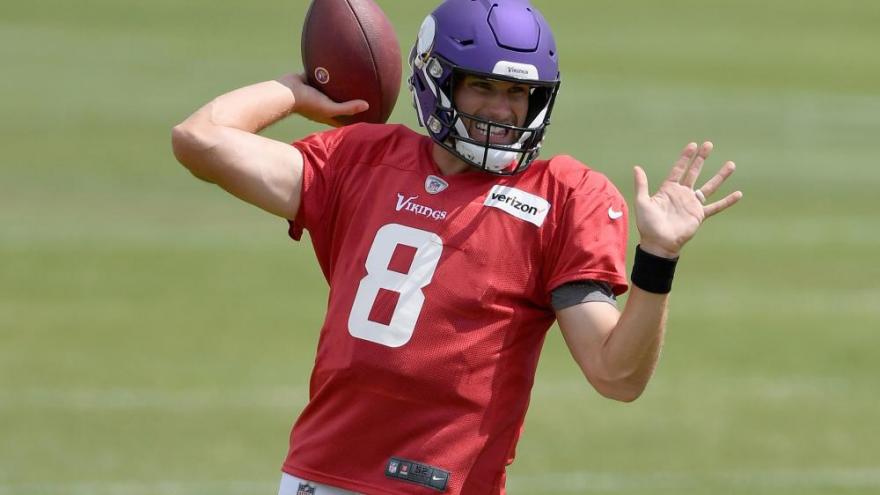 Minnesota Vikings quarterback Kirk Cousins is taking a controversial approach to Covid-19 for a man of his stature.

(CNN) -- Minnesota Vikings quarterback Kirk Cousins is taking a controversial approach to Covid-19 for a man of his stature.

"If I die, I die," he said Wednesday during an interview on Spotify's "10 Questions With Kyle Brandt" podcast. On it, Cousins said he's taking a "survival of the fittest" approach to the pandemic.

"If I get it, I'm gonna ride it out," Cousins said. "I'm gonna let nature do its course. Survival-of-the-fittest kind of approach. And just say, if it knocks me out, it knocks me out. I'm going to be OK. You know, even if I die. If I die, I die. I kind of have peace about that."

Brandt asked Cousins his concern level on getting the virus, on a scale from 1-10, "1 is the person who says, 'Masks are stupid, you're all a bunch of lemmings' and 10 is, 'I'm not leaving my master bathroom for the next 10 years."

"I want to respect what other people's concerns are," he said. "For me personally, just talking, no one else can get the virus. What is your concern if you could get it? I would say I'm gonna go about my daily life."

Cousins said his "opinion of wearing a mask is really about being respectful to other people. It really has nothing to do with my own personal thoughts."

Cousins later clarified his remarks on Wednesday, saying that the interview was from July and he wasn't being clear.

"What I wanted to say then, what I would echo again now is that while the virus does not give me a great amount of personal fear, there's still great reason for me to engage in wearing a mask and social distancing and washing my hands as frequently as I can and following protocols that have been set in place, obviously to be respectful and considerate of other people, which is very important," he said.

The athlete's overall remarks go against some of the top doctors and infectious disease experts in the country, who have warned Americans to wear face masks and practice social distancing to prevent the the virus's spread. Already in the US, more than 6 million cases of the virus have been reported and more than 184,000 people have died -- making the US one of the hardest-hit countries in the world.

And the concept of "survival of the fittest" -- trumpeted by some hoping that the US might reach "herd immunity" at some point in the near future -- of course suggests that those who aren't fit don't survive. That would mean millions more dead Americans.

"Waiting for the virus to 'immunize' the population is a very Darwinian concept, survival of the fittest," Dr. William Schaffner, professor of infectious diseases at Vanderbilt University, told CNN in July after Sen. Rand Paul claimed that millions of people who have been infected by the virus were now essentially blocking its spread. "We generally try to avoid that in public health," said Schaffner.

Cousins and the Vikings are expected to begin their season late this month.

The team has already announced that it will not allow fans for the first two home games of the season due to the pandemic.