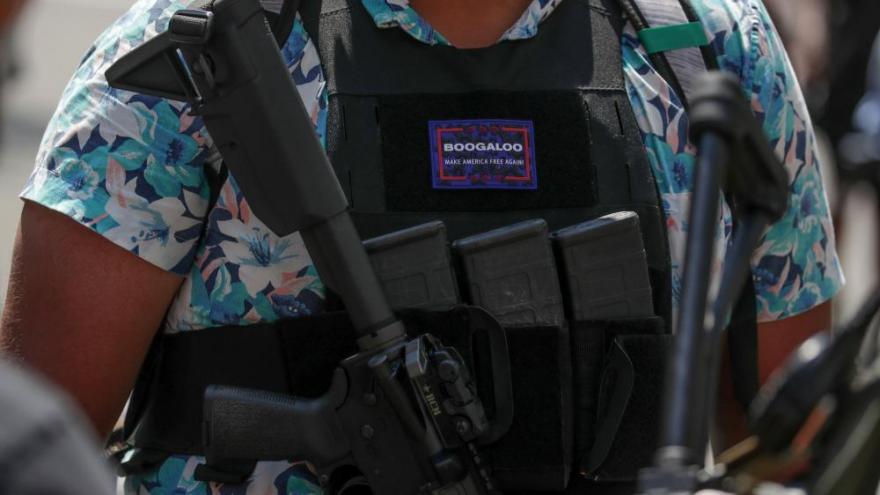 An armed protester wearing a Hawaiian shirt and a Boogaloo badge takes part in a rally for Second Amendment gun rights near the Virginia State Capitol in Richmond, Virginia.

(CNN) -- Kevin Mathewson founded his militia, the Kenosha Guard, in June, as massive demonstrations against police brutality grew across the country, bringing with them spurts of violence.

A former alderman who's raising two children in the lakeside Wisconsin city, Mathewson said in an interview that he wanted to "start a spark that let people know there are others out here that want to defend ourselves, our lives, our neighborhoods."

For weeks, the group's charge to defend the community reached only a few dozen followers online and mustered no real-world activity. Then on Sunday, a Kenosha police officer shot Jacob Blake, a 29-year-old Black man, seven times in the back and the epicenter of the summer's reckoning over racial injustice shifted to Mathewson's backyard.

Over two nights of protest and unrest, with chants of "Black Lives Matter" and buildings burned to the ground, the Kenosha Guard's online membership ballooned. On Tuesday, a renewed call to arms on Facebook from the group drew thousands of responses. Just before midnight, amid a jumble of protesters, law enforcement, armed citizens and citizen journalists out past a mandated curfew, a 17-year-old who'd been standing guard outside a car dealership shot and killed two men, seriously injuring a third. Kyle Rittenhouse, the alleged teenage gunman, now faces multiple counts of homicide. His attorney says it was in self-defense.

While there is no indication that Rittenhouse was a member of the Kenosha Guard (Facebook has said that it has no evidence he was connected to the group online), the bloody escalation follows a striking emergence of gun-toting amateur groups at protests nationwide.

Driven by a patchwork of ideologies and enflamed by the Trump administration's often misleading messaging on far-left agitators, analysts say, the groups are fueling concern among law enforcement and hate group watchers that they could be the cause of more violence. Legal experts are also warning that the militias, with their embrace of high-powered weapons and lack of police training, are on shaky constitutional ground.

"Law enforcement officers go through months of training in the use of force, de-escalation of force, defensive tactics, and the use of a firearm to defend themselves and the citizens they are sworn to protect," said Thomas O'Connor, a retired FBI special agent who spent much of his career investigating domestic terrorism. "A civilian with a firearm on the street during a volatile situation may have the legal right to have that weapon, but that does not always mean it is the wise decision."

Sometimes armed citizens at protests are welcomed by law enforcement, like at early protests in Kenosha where police were seen giving apparent militia members water and thanking them, but Kenosha County Sheriff David Beth has also said that the groups raise tensions.

"Part of the problem with this group is they create confrontation," Beth said at a news conference Wednesday after Rittenhouse's arrest. "If I put out my wife with an AR-15 or my brother with a shotgun or whatever it would be walking through the streets, you guys would wonder what the heck is going on. That doesn't help us."

Many established militias, or civilian forces, have long aligned with anti-government causes in pockets of the US and groups like the Oath Keepers first became an antagonizing presence at protests in Ferguson, Missouri, in 2014.

Since April, according to researchers who track hate groups, more decentralized and organic outgrowths of the movement have increased in visibility, first at "reopen" rallies that challenged coronavirus shutdowns, and later at the site of racial justice demonstrations, where they say their patrols meant to deter criminal behavior have led to varying degrees of confrontation.

One survey, by social justice think tanks Political Research Associates and the Institute for Research and Education on Human Rights, documented 187 appearances of paramilitary and other far-right actors at rallies nationwide from late May to early July.

Armed citizens have squared off with Black Lives Matter protesters in Salt Lake City and stood outside of looted stores in Minneapolis. Hundreds of militia members and far-right group members gathered in Gettysburg, Pennsylvania, propelled by a threat of flag burning that was likely a hoax.

In Albuquerque, violence erupted and one person was shot when protesters calling for the removal of a statue of a controversial conquistador squared off with members of the New Mexico Civil Guard, a militia. The militia group denied the gunman was a member of the organization, but local leaders roundly criticized the armed group for inflaming tensions that led to the shooting.

"It's the logical end of a years' long path that we've been on of normalizing the idea that vigilante justice is not just justifiable but is necessary," said Howard Graves, a senior research analyst at the Southern Poverty Law Center, which studies hate groups. "It's not an accident that this resulted in death -- that is what's going to happen based on what these groups envision themselves doing."

Shared among the variety of groups, which are mainly comprised of White men, is often a disdain for the Black Lives Matter movement and a misplaced emphasis on its ties to radical left-wing violence, though some have more explicit, extreme and at times racist ideologies, said Alex Friedfeld, an investigative researcher at the Anti-Defamation League's Center on Extremism who monitors the groups' activity online.

Many are also inspired by disinformation they read online about violence and organized looting campaigns tied into the Black Lives Matter movement. President Donald Trump and the leaders of the Justice Department have regularly aggrandized the role of the anarchist group Antifa in the summer's unrest without providing much evidence.

"There's this disconnect between what is real on the ground and what people are reading on the internet, where everyone is sharing messages about George Soros paying for buses to go out into the towns and all these types of things that are totally not true," Friedfeld said, referring to the billionaire philanthropist at the center of many anti-Semitic conspiracy theories.

The Oath Keepers, which draws its members from the ranks of the military and law enforcement, and adherents to the Three Percenter militia movement organize to confront conspiracies about an overreaching federal government.

Members of the Boogaloo movement range in ideology from anarchists to White supremacists, but have proved to be some of the most violent extremists this summer. The FBI has arrested several this summer, including a pair charged in connection to the murder of a federal security guard at an Oakland, California, courthouse in May amid protests in the city. They have pleaded not guilty.

Mathewson, of the Kenosha guard, denied any ties to an ideological movement and said he's in favor of elements of police reform, like the installation of body cameras, which he advocated for in his time in city office. He said that a teenager like Rittenhouse who may not have been legally able to openly carry a rifle should not have come to Kenosha. Rittenhouse has been charged with illegal possession of a dangerous weapon while under the age of 18. He has not entered a plea to any charge against him.

"To me, I guess I hoped it would be common sense that I'm not looking for children to come out," Mathewson said.

Facebook later took down the Kenosha Guard's pages on the website and admitted that it should have been removed earlier under the company's policy on "dangerous groups." Mathewson told CNN he was disappointed in that decision.

While gun laws in 44 states make it legal to openly carry a long gun in public, armed citizens would generally not have a right to use deadly force while protecting someone else's business.

Their ability to band together as a militia and advocate for the use of force is also legally dubious, said Mary McCord, a former senior Justice Department official who is now the legal director of the Institute for Constitutional Advocacy and Protection at the Georgetown University Law Center.

Despite language about a "well-regulated Militia" in the Second Amendment, the Supreme Court has long said that the right to bear arms belongs to individuals alone, and does not prevent states from writing laws that bar the creation of citizen militias.

All 50 states now have similar laws or constitutional provisions that prohibit private military activity, according to McCord, and after the violence in Charlottesville in 2017, her Georgetown group won court orders that barred 23 individuals and organizations from returning to the city in groups of two or more with anything that could be used as a weapon at a rally.

In a letter sent Wednesday to law enforcement and political leaders in Kenosha, McCord pointed to provisions in Wisconsin law that "prohibit private paramilitary and unauthorized law enforcement activity" and offered to consult with them about "how to protect public safety while preserving constitutional rights during public protests and demonstrations."

"The Kenosha Guard were falsely assuming this function to protect property that they don't have," McCord said.