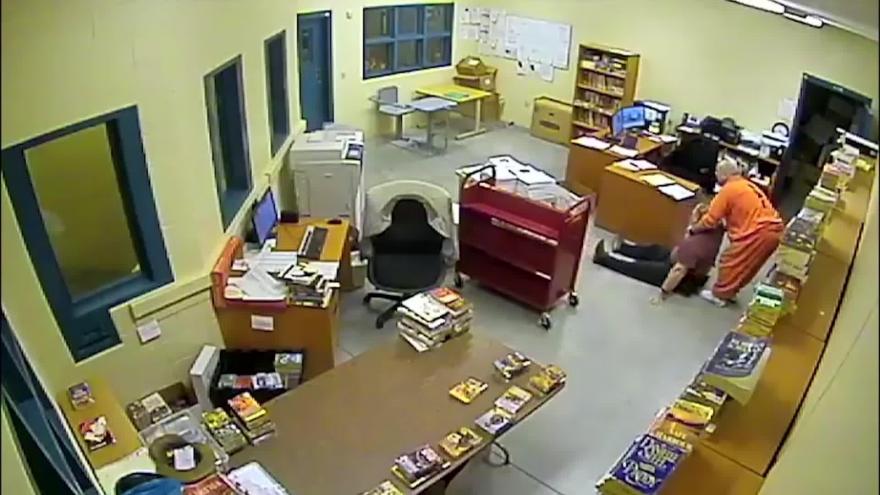 The Arizona Department of Corrections has released video of a hostage situation between an inmate and employee inside a Buckeye prison library.

(CNN) -- The Arizona Department of Corrections has released video of a hostage situation between an inmate and employee inside a Buckeye prison library.

The incident took place December 26 when a maximum-custody inmate identified as Timothy Monk took a librarian hostage using a prison-made blade weapon in an apparent demand to leave prison, the department of corrections said in a press release in December.

Multiple cameras inside the prison captured the over two-hour incident showing Monk holding the weapon to the neck of the librarian, Allen Hartzell, and dragging him toward a storage area.

An officer is heard trying to negotiate with Monk while a team of heavily armed officers are planning to retrieve Hartzell. The team stormed the library after deploying a "diversionary device," according to the press release, and no one was injured.

The video was published on YouTube by authorities on Thursday. They said it shows "a good example of the ever-present risks faced by correctional employees."

"Arizona's Correctional Officers put their lives on the line to protect our safety," Arizona Gov. Doug Ducey tweeted. "This is another example of the difficulties and dangers they face as they carry out their duties. Thank you to everyone involved for your heroic actions."

Monk is serving 97 years in prison and will face new charges for this incident. He has been held by the Arizona Department of Corrections since 1988 after he was sentenced for armed robbery, sexual assault and kidnapping.

In 2006, he was convicted of aggravated assault, kidnapping, promoting prison contraband and sexual assault while incarcerated at the Tucson prison.

On Thursday, Hartzell was presented with the Medal of Valor for his "calm, quick-thinking actions" during the incident, the Arizona Department of Corrections tweeted.

CNN has reached out to the Arizona Department of Corrections for further comment.