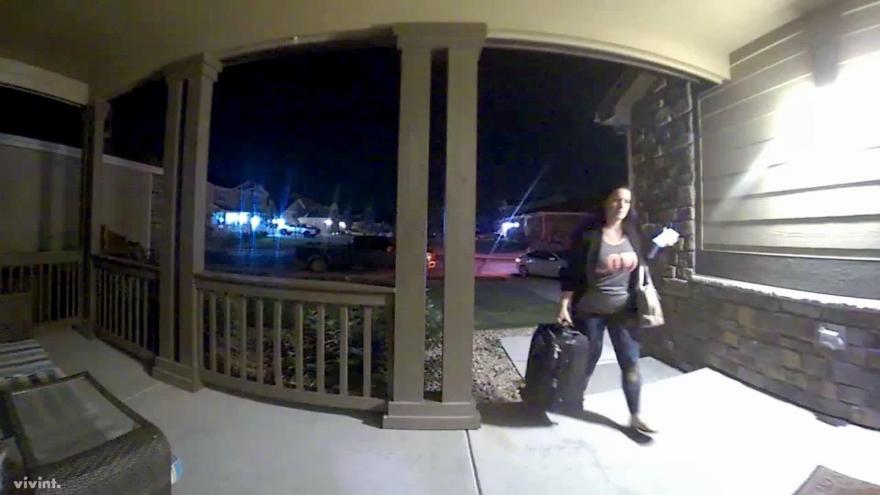 Front-door video at Shanann Watts' Frederick, Colorado, home captures the moment a friend drops her off from the airport on August 13, 2018.

(CNN) -- It's 1:48 a.m. and a pregnant Shanann Watts is arriving home from a business trip to Phoenix.

Front-door video at her Frederick, Colorado, home captures the moment a friend drops Watts from the airport on August 13, 2018. She can be seen carrying her suitcase up the driveway and to the door.

The short video clip is believed to be the last time Shanann Watts, who was 15 weeks pregnant, is seen to be alive. Within hours -- possibly even minutes -- Shanann was slain, authorities have said.

Her husband, Chris Watts, pleaded guilty in November to first-degree murder and other charges in the death of his wife and young daughters. He was sentenced to five life sentences with no possibility of parole.

HLN obtained the new video through an open records request with the Weld County District Attorney's Office. Prosecutors had not previously released the footage.

By mid-afternoon of August 13, friends and family of Shanann were starting to become concerned. She wasn't answering her phone -- and her daughters hadn't shown up for preschool.

Authorities said the three were dead by this time. It's not clear whether the girls were alive when their mother arrived home.

Within days, Shanann was found buried in a shallow grave on a ranch, just under an hour away from the couple's home. Roughly 100 feet away were the bodies of her little girls, Celeste, 3, and Bella, 4. They had been dumped in separate 20-foot tall oil tanks.

Prosecutors said Chris Watts was having a secret affair with one of his co-workers. As Shanann Watts desperately tried to save her crumbling marriage, police say her husband was focused on this new love interest.

Evidence also paints a picture of a family mired in debt, living well above its means.

"This has certainly permeated the conscience of a big section of the public and we continue to get correspondence on a daily basis," Rourke says.