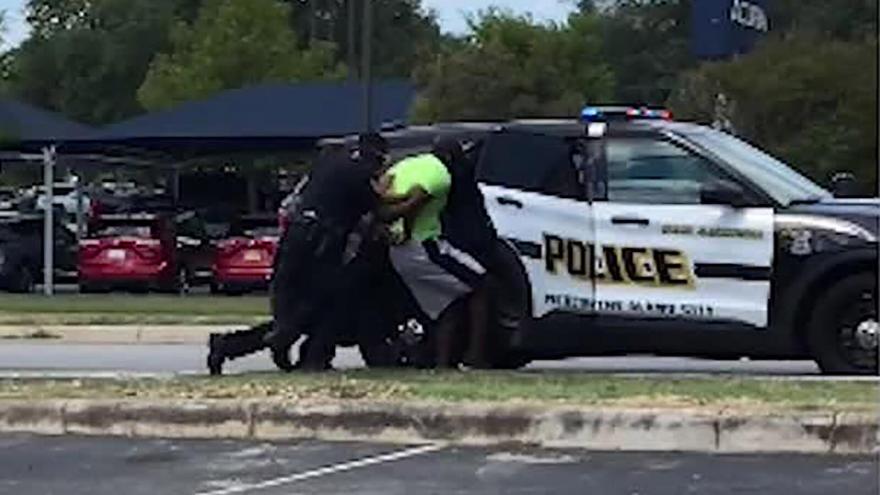 Video of the arrest, taken by a bystander, shows police pushing the handcuffed man into their vehicle.

(CNN) -- A Black man in San Antonio was stopped and detained by police Tuesday while he was jogging, witnesses said, as officers searched for a suspect in a nearby domestic violence call.

Video of the incident posted to social media shows officers forcefully shoving the man into a police vehicle as he screams.

The arrested man, identified in a police report as Mathias Ometu, 33, was seen walking out of an apartment complex as officers arrived in response to a call about a domestic violence assault, according to a police report from the incident.

Officers stopped Ometu and told him they had "reasonable suspicion to believe" he "matched the description of an alleged strangulation family violence incident," the report said.

During the incident, Ometu allegedly kicked two officers, striking one in the face, the police report said.

The victim of the family violence incident met officers and said Ometu was not the suspect, but Ometu still would not give officers his information, the report said.

He was arrested and charged with two counts of assault on a peace officer, a statement from the San Antonio Police Department said.

Jenny Rodriguez and Victor Maas, who witnessed the arrest and filmed the interaction between Ometu and police, told CNN by phone Friday that Ometu did not seem aggressive or confrontational toward the officers.

Their videos show Ometu handcuffed standing next to a police vehicle calmly for what appears to be about six minutes before two officers start to push Ometu into the vehicle. One witness noted in a video that at least one of the officers was also Black.

The video shows officers struggling with Ometu to push him into the back of a police vehicle and he is heard yelling, "You're choking me!" several times as the struggle continues for over a minute.

As the officers shut the doors of the vehicle with Ometu inside, at least three more police vehicles arrive, the video shows.

Rodriguez said she was walking her dog when she saw the man jogging around 2 p.m. Tuesday.

All of a sudden, police arrived and began to go towards the man and started speaking with him, she said. About 10-15 minutes after the conversation started, Rodriguez said, they started to put him in handcuffs.

She said she knocked on the office window of her boyfriend and coworker to grab the phone to start filming. Her boyfriend, Victor Maas, also began filming.

Maas said officers used Tasers on the man, although it is not seen during the video.

The entire incident lasted roughly an hour, according to Maas and Rodriguez, but only about 20 minutes of the interaction was included in the videos.

Once the investigation is complete, the district attorney's office will "review all evidence and decide how to proceed with any potential criminal case," Gonzales said.

Tess House, an attorney who has been in contact with Ometu's family but is not yet formally representing him, was unable to comment on his behalf when reached by CNN over the phone Friday. However, she told CNN that Ometu has been released from jail but his phone is still in the possession of police.

CNN has not been able to reach Ometu or family members for comment.

San Antonio Mayor Ron Nirenberg said in a tweet Thursday that he is "seeking a full account of this incident, which is currently under investigation." He has not responded to a request from CNN for further comment.

"We have to approach this situation seriously because every single resident deserves fair and equitable treatment from their city," Nirenberg said in the tweet.

The San Antonio Police Department, in a statement emailed to CNN on Friday, said officers were called to investigate a "family violence incident."

"The suspect fled before police arrived, but the victim provided officers with the suspect's information and officers also obtained information that the suspect was also wanted for a felony robbery warrant," the statement read.

"The individual contacted was in close proximity to the call and he matched the physical and clothing description provided by the victim. That was the only reason he was stopped and questioned as the officers legitimately believed he was the wanted suspect."

The statement also said the department is aware of "several videos of the incident that have been posted online" and that the incident "will be reviewed administratively to ensure all policies were followed."