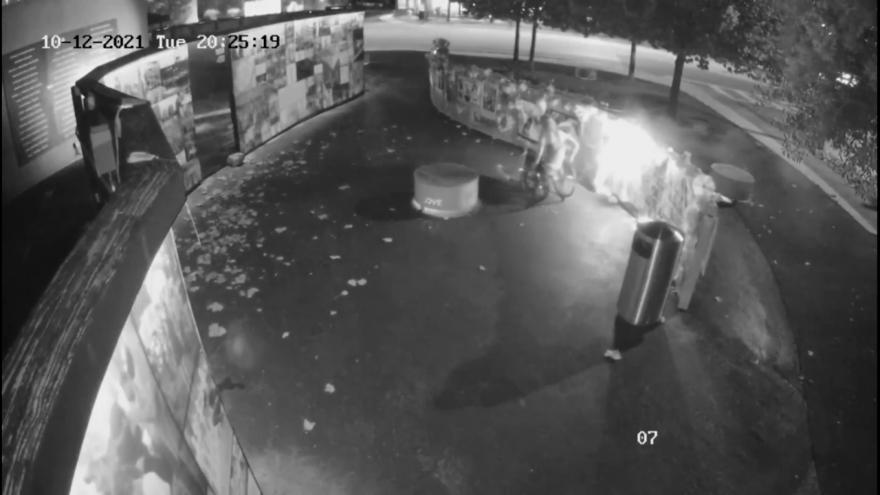 Video released by onePULSE Foundation shows a person in a wheelchair leaving the scene of last month's fire.

(CNN) -- The Orlando Arson/Bomb squad announced the arrest of a man accused of setting fire to part of the Pulse Interim Memorial, which honors the victims of one of the worst mass shootings in US history.

Authorities charged a 64-year-old man with felony criminal mischief for allegedly setting the fire last month, the Orlando Fire Department said Tuesday in a news release. No one was hurt in the incident, which was captured on surveillance video.

onePULSE Foundation released video on its Facebook page on Saturday that appears to show the man setting fire to materials on a wall at the memorial, which honors the 49 victims of the 2016 shooting.

The security video shows a person in a wheelchair approaching the wall at about 8:30 p.m. on October 12, just before the fire started. There's a bright light, and then the fire spreads as the person wheels away and crosses a street before going out of the frame of the video.

The post said that the fire damaged the memorial's Offering Wall, where visitors can leave "flowers or mementos of your love and support."

"Three Angel banners were burned along with other items within the affected area," the post said.

Two of the banners were placed by family members and the third featured all of the victims, who are often referred to as the 49 Angels, onePULSE spokesman Scott E. Bowman told CNN in an email. The foundation is working to replace the banners, he said.

In the video, the fire can be seen burning for about 15 minutes before mostly burning out on its own. A person can be seen walking up to the wall and stamping out some of the remaining flames.

Bowman said the fire was set in a free-standing section of the memorial that is not attached to the main building.

He said that they have guards at the memorial on a rotating basis, in addition to 24-hour video surveillance and that a marked car is on the property at all times.

The foundation learned about the incident the next morning, Bowman said.

The Orlando Police Department said the incident was not reported until November 3.

Ashley Papagni, public information manager for the Orlando Fire Department, said that firefighters were not called to the scene at the time of the incident.

onePULSE Foundation is a nonprofit organization established to memorialize those killed and the dozens wounded in the June 12, 2016, shooting at the Pulse nightclub, which was a popular venue for Orlando's LGBTQ+ community.

Pulse survivor Brandon Wolf told CNN affiliate WFTV that he hopes the incident is investigated as a hate crime. He said he visits the memorial to feel close to the friends he lost that day.

"The idea that someone could desecrate a space like that, do something so violent, and so hateful, it's really heartbreaking to me," Wolf told WFTV.

The foundation is working to build a permanent memorial and museum at the site of the nightclub.

In June, President Joe Biden signed a bill to create the National Pulse Memorial at the site.