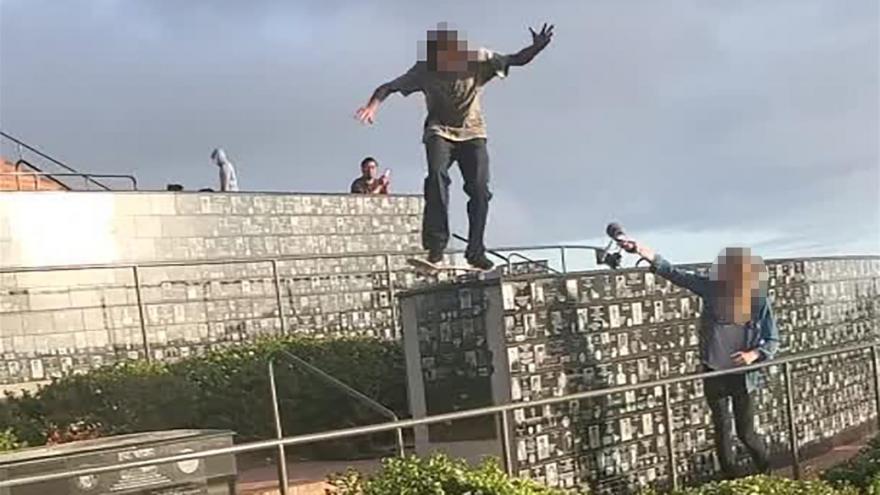 A skateboarder in California caused controversy on Monday after a video surfaced of him riding across the sacred walls of a memorial honoring military members. CNN obscured parts of this image to protect the identities of the pictured individuals.

(CNN) -- A skateboarder in California caused controversy on Monday after a video surfaced of him riding across the sacred walls of a memorial honoring military members.

Over 5,000 Americans are etched into the black granite walls of the Mt. Soledad National Veterans Memorial in San Diego. It is considered one of the most unique veterans memorials in America, according to the memorial group. People from all over the nation visit to honor the brave men and woman that are listed on the plaques that cover the walls.

In the video, recorded and uploaded by San Diego resident Bill Bender, an unidentified man is seen riding his skateboard across the to tops of the curved granite walls. He then jumps with the board and attempts to land on another side wall. While he attempts the trick, a group nearby watches and films him.

"I'm appalled at such disregard and carelessness," Neil O'Connell, President and CEO of Mt. Soledad National Veterans Memorial, said in a statement posted on Facebook.

"Our granite walls require constant care by volunteers due to the atmosphere. It's a lot of work. But come on, how disrespectful is it to ride skateboards over the tops and edges of this fine surface."

O'Connell said that there was no damage to the plaques in this incident.

The video is no longer available to view on Facebook. But when it was public, many people slammed the behavior.

Don Hotz was among the video viewers. He told CNN affiliate KGTV that he recognized the memorial as the location where his father and uncle have plaques.

"I know what it's like to be a kid and a skater but this where frankly I draw the line," Hotz said. "If you're listening guys, I would appreciate it if you would not do that kind of thing. That's disrespectful to men that spend their lives protecting what we have today."

San Diego Police Department officials told CNN they are aware of the incident and saw the video on social media. They are currently investigating this as a vandalism case.

The memorial dates back to 1952 and honors veterans, living or deceased, from the Revolutionary War to the current war on terrorism, according to its website.

"We would ask that everybody remember to honor the sanctity of the MT Soledad National Veterans Memorial and respect the sacrifices of our veterans who are honored here," O'Connell said. "Especially to be considerate of their families and loved ones who hold the memorial plaques so close in their hearts."