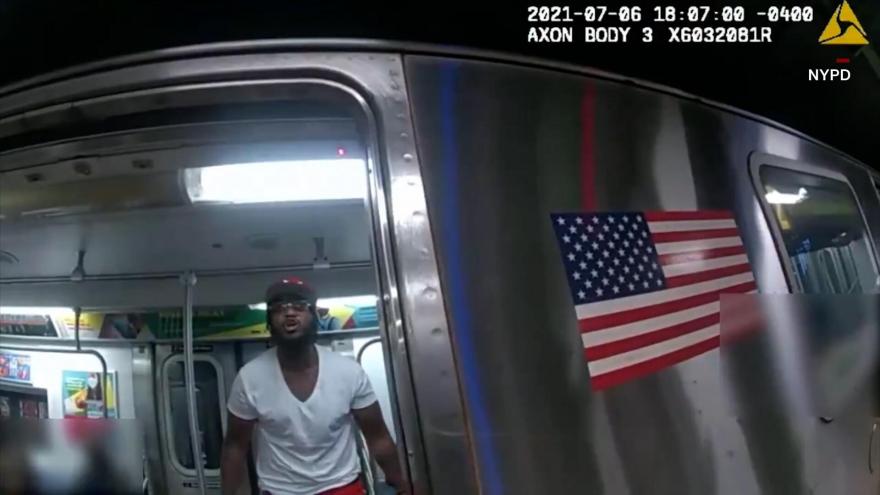 Video circulating of a man who was tased by police after they say he helped another passenger evade a subway fare in New York City has drawn scrutiny from local politicians and community leaders.

(CNN) -- Video circulating of a man who was tased by police after they say he helped another passenger evade a subway fare in New York City has drawn scrutiny from local politicians and community leaders.

On July 6, an individual opened an exit gate for an acquaintance to enter the 116th Street subway system, "evading the fare," according to a statement accompanied by video posted by NYPD News on Twitter on July 14.

"Body-worn camera footage shows the man cursing at officers, refusing to exit the train, & threatening them. With additional officers on scene, the man continued to resist arrest, prompting the use of a taser," the statement from NYPD News said.

Some of the exchange is visible in a snippet of body camera video shared by NYPD News.

The video does not show any part of the altercation between the man and the officers or the tasing. A 22-second clip shows a man yelling expletives at the officers, whose faces were blurred by the NYPD.

An officer can be heard responding "we're not leaving," "alright" and "don't worry about it" as the man hurls expletives including "F***k the police."

When reached by CNN, the NYPD did not provide a full version of the body camera video.

But eyewitness video shared Wednesday on Twitter by Democratic City Council candidate Anthony Beckford shows other portions of the exchange.

Surrounded by several NYPD officers, the man appears to begin resisting arrest. After he struggles with officers, they appear to get a hold of him, and it is then that he is tased.

Beckford says a community member shared the bystander video with him and claimed that even though police knew the man paid his own fare, they approached the man because he "taunted" police. While police have not specifically responded to questions regarding that claim, they do say the individual opened an exit gate for an acquaintance to enter.

The suspect, David Crowell, 29, is facing charges of menacing in the third degree, harassment in the second degree, resisting arrest and obstructing governmental administration in the second degree, according to the Manhattan District Attorney's Office. He isn't charged with anything related to fare evasion.

Crowell was arraigned on July 7 and the judge ordered a supervised release. His next court date is August 5, according to the district attorney's office.

Bethany Bonsu, an attorney for Crowell, said the charges are "absolutely absurd." Bonsu said the New York Police Department's remarks about her client were attempts at character assassination, adding "it's a classic example of the NYPD using excessive force on Black people."

Bonsu would not comment on the any of the factual questions of the case but said her client has not entered a plea at this time. She told The New York Times that Crowell had let his cousin through the gate and had paid his fare, too, after letting him through.

CNN has reached out to the Metropolitan Transit Authority for comment.

Community leaders respond to the incident

Beckford, who is also president and co-founder of Black Lives Matter Brooklyn, tells CNN, "This is a clear example of abuse of power and further validates the calls for Justice and Accountability."

He is calling for the arrest of the officers involved and for the Manhattan district attorney to drop all charges against the accused.

"Anything less, will be considered a slap in the face to Black and Brown New Yorkers who want to live their life without experiencing consistent police violence. If we are going to combat violence, let us make sure that we combat police violence as well," Beckford said.

Asked about the viral video during a news conference about the pricing of subway tickets on Thursday, Mayor Bill de Blasio said that while he hadn't seen it, he was "concerned" based on what he heard about it.

"From.. what I understand of the NYPD body camera footage, the individual involved was very aggressive in some ways, even threatening towards police and that's just not acceptable, either," he said.

"With that said, we're very clear on the training for our officers, the goal is to deescalate, and clearly here we did not end up with a deescalated situation. So, this needs to be looked at carefully to see what could be done differently going forward."

De Blasio also said "fare evasion is not acceptable." CNN has followed up for an updated statement from the mayor.

CNN has also reached out to Democratic mayoral candidate Eric Adams, a retired captain of the NYPD, whose campaign touted his qualifications to address crime in the city.

Former mayoral candidate Maya Wiley, who conceded to Adams in the primary, tweeted in response to Beckford's post of the video; "This is NOT public safety. It is a lot of police officers escalating an incident that, at most, would have been a summons. More police officers in the subway does not expand public safety for everyone."