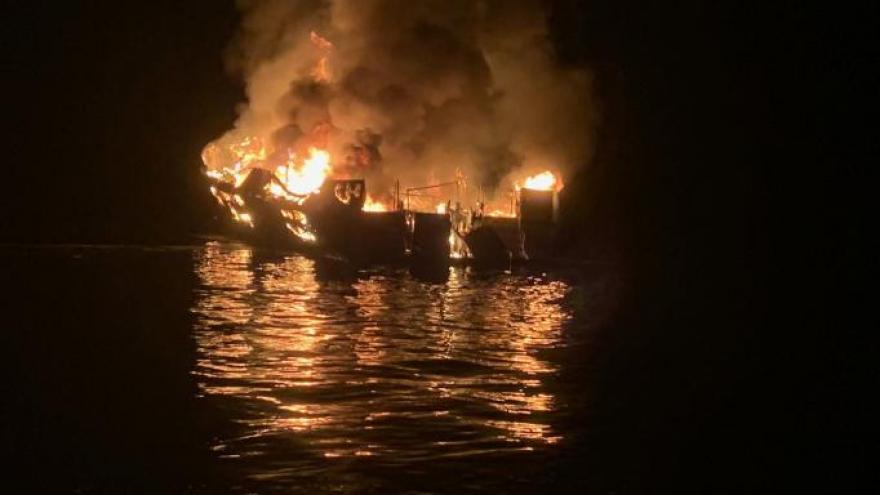 (CNN) -- The people who perished on a dive boat that was consumed in flames off the California coast on Labor Day likely died from smoke inhalation, not burns, Santa Barbara County Sheriff Bill Brown said Friday.

Of the 39 people aboard the 75-foot dive boat Conception, only five crew members, including the captain, were found alive.

Preliminary indications are that "the cause of death was smoke inhalation" and "that the victims died prior to being burned," Brown told reporters. DNA samples from relatives were needed for identification because of the extent of the burns.

There are no plans for autopsies because of the belief that smoke inhalation killed the victims, Brown said. The final determination will be made by a medical examiner.

The victims, who were in the lower sleeping deck, likely got trapped when the blaze blocked their escape routes, according to authorities. The crew was on the upper wheelhouse deck.

Authorities have notified the next of kin of all those who died.

The names of 22 victims were released Friday:

Brown said authorities had to contact family members of the victims as far away as India, Singapore, and Japan.

The Conception's certificate of inspection required a roving watchman, US Coast Guard Capt. Monica Rochester said at a news conference.

"The role of that person is to rove and check on the safety of the area they have been placed in charge of," she said.

When asked whether there was a watchman on duty, Glen Fritzler, owner of the boat, wrote to CNN, "a crewman was in that space approximately 1/2 before the fire. Pending case cannot say anymore." He did not respond when asked whether he meant a half hour.

Efforts to raise the wreckage began on Friday, with authorities hoping to locate the remaining bodies and gather evidence from the charred vessel, Brown said.

Crews will roll the upside-down vessel, stabilize it, and then gently lift it from the water, a process that could take days, Rochester said.

A team of investigators, including members of the federal Bureau of Alcohol, Tobacco, Firearms and Explosives, will attempt to pinpoint the cause of the fire.

"We're looking to determine what happened and a criminal element to that is always a possibility," Brown said. "At this point, no one has been charged criminally."

Crew members tell investigators they tried to save passengers

The National Transportation Safety Board said Thursday that crew members told investigators they tried to rescue the 34 people who were still on board during the blaze.

"What's emerging from the interviews, and these are individual interviews with NTSB investigators, is a harrowing story of the moments before the fire erupted on the vessel," NTSB board member Jennifer Homendy said.

One crew member said he awoke to a noise and left his bunk to see flames erupting from the galley area below, Homendy said. The galley was above the sleeping quarters of the guests

The crew members tried to get down the ladder from the galley to the sleeping area, but it was engulfed in flames. They were forced to go down to the main deck from the bridge, and one of them broke their leg getting down, according to Homendy.

'The crew had to jump from the boat'

After reaching the main deck, the crew members went to the double doors of the galley to try to get to the passengers, but it was engulfed in flames, NTSB investigators were told.

They then tried and failed to get in through a window in the front of the vessel, Homendy said at the press conference.

"At that point, due to heat, flames and smoke, the crew had to jump from the boat," Homendy said.

Some crew members swam to a skiff on the back of the boat, picked up the other crew and they made their way to a nearby vessel to call 911, Homendy said.

"At that point, they left the vessel and turned back to the Conception in the skiff to try to rescue any survivors," she said.

The NTSB will evaluate whether there were "issues with evacuation or responses" or "escape survival factors," she said.

Officials interviewed the owner-operator of the dive boat, Homendy said, without giving any details.

Thirty-three bodies have been recovered, and one remains missing, the Santa Barbara County Sheriff's Office's said.