Vice President Harris to travel to Poland and Romania 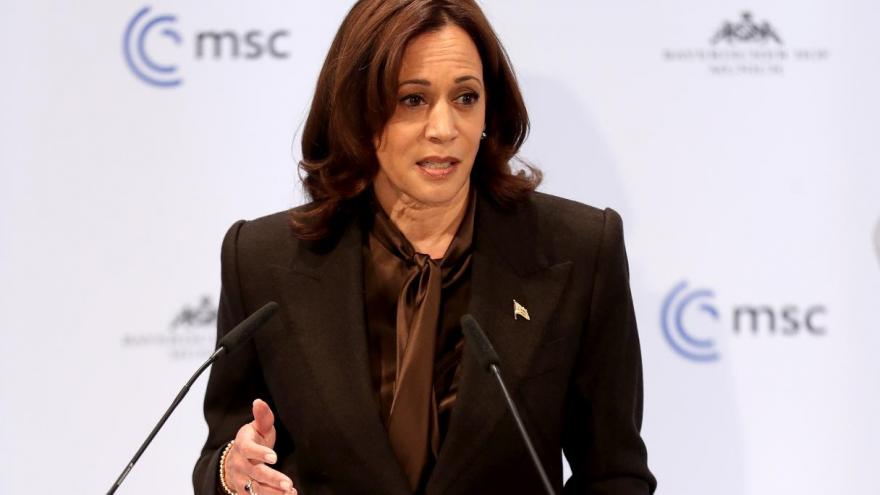 The White House is discussing sending Vice President Kamala Harris to Poland and Romania. Harris here speaks at the 2022 Munich Security Conference in Germany on February 19.

(CNN) -- Vice President Kamala Harris will travel to Poland and Romania next week, the White House says, as the Biden administration continues to show support for Ukraine and the US' eastern NATO allies while Russia's invasion of Ukraine enters a dangerous new phase.

Harris' trip will take place from Wednesday through March 11, and will include stops in Warsaw and Bucharest, according to a Friday announcement by the White House. She'll meet with the leaders of both countries to coordinate on their response to Russia's invasion and discuss how the US can further support Ukraine's neighboring nations as they prepare to welcome Ukrainian refugees fleeing the conflict.

The White House says the leaders will also "discuss their continuing support for the people of Ukraine through security, economic, and humanitarian assistance and our determination to impose severe economic consequences on Russia and those complicit in Russia's invasion."

"Her visit will demonstrate the strength and unity of the NATO Alliance and US support for NATO's eastern flank allies in the face of Russian aggression. It will also highlight our collective efforts to support the people of Ukraine," the White House announcement states.

The Eastern Europe visit will take place on the heels of Harris' latest international travel to the Munich Security Conference, where she met with US allies and partners including Ukraine's President Volodymyr Zelensky. Harris also spoke over the phone with several Eastern European leaders on Tuesday, including Polish Prime Minister Mateusz Morawiecki and Romanian Prime Minister Nicolae Ciuca.

The Hill was first to report on the discussions to send Harris to Poland and Romania.

US and other Western officials warned this week that Russia's strategy is shifting toward a "slow annihilation" of the Ukrainian military, warning that Russia could focus on violent bombardment of cities and civilian targets as the conflict becomes a grinding war of attrition.

Since Russia invaded Ukraine last week, the US and allies have ramped up their responses to the conflict, establishing a variety of economic sanctions and providing Ukraine aid.

Since the invasion began, Russia's military has launched more than 500 missiles, a senior US defense official said Friday.

A White House statement following Tuesday's calls said that in each of her conversations, "the Vice President underscored the strength and unity of our Alliance and welcomed each of her counterparts' leadership and coordination on robust response measures, including sanctions and other economic measures through the European Union. They also discussed the robust NATO response."

Harris also reiterated the US' support for Ukraine and "reaffirmed US support for the international rules and norms that have brought peace and security in Europe since World War II and that have served as the foundation of the NATO Alliance."

This story and headline have been updated with further developments Friday.