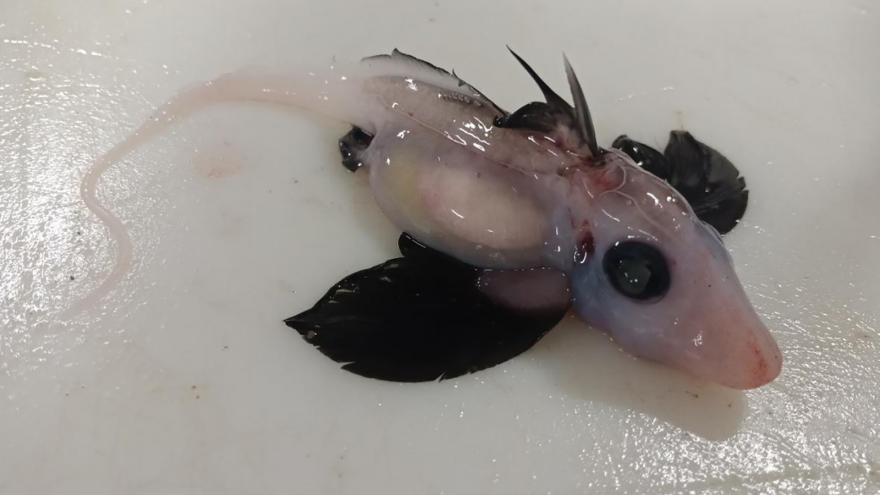 (CNN) -- Scientists in New Zealand have discovered a newly-hatched ghost shark which they say could inform their knowledge of the "mysterious" creature.

The ghost shark was found at a depth of around 1,200 meters (about 3,900 feet) on the Chatham Rise, an area of ocean floor off the east coast of the South Island.

The "very rare" discovery was made during a recent survey, the National Institute of Water and Atmospheric Research said in a press release on Tuesday.

A deep water animal, the ghost shark is scientifically known as chimaera, with other names including rat fish, spook fish and rabbit fish, according to the Shark Trust. The ghost shark is closely related to sharks and rays.

They are cartilaginous fish -- having skeletons primarily made up of cartilage -- and their embryos grow in egg capsules laid on the sea floor, and feed off egg yolk until they hatch.

Brit Finucci, a fisheries scientist who was part of the team that made the discovery, said in the press release that the ghost shark was identifiable as being newly hatched because its belly was still full of egg yolk.

"We don't actually know a lot about ghost sharks," Finucci told CNN Thursday. "What we do know mostly comes from adult specimens. So it's very rare and very uncommon to find juveniles of a lot of these species, so that's why I got quite excited."

Finucci added that as most ghost sharks are found in deep water, they are "quite difficult to get to," and said she hoped the new discovery would help to fill some "biology gaps."

The exact species of the ghost shark the team discovered is not yet known, and Finucci said new species of ghost shark are still being discovered and that measurements and genetic samples would now be taken for identification purposes.

"We need to figure out what species we're looking at," Finucci said, adding that ghost sharks were the "most ancient lineage" of cartilaginous fish. "We're not sure what we're going to find, which is also quite exciting."

The age of the specimen means that researchers will now be able to compare it with their knowledge of adult ghost sharks, accounting for differences in habitat, diet and appearance that Finucci says can crop up between juveniles and adults.

"We're hoping this will give us some more indication about the biology and ecology," Finucci added. "From what we do know about the more well-studied species, juveniles can be very different from adults."