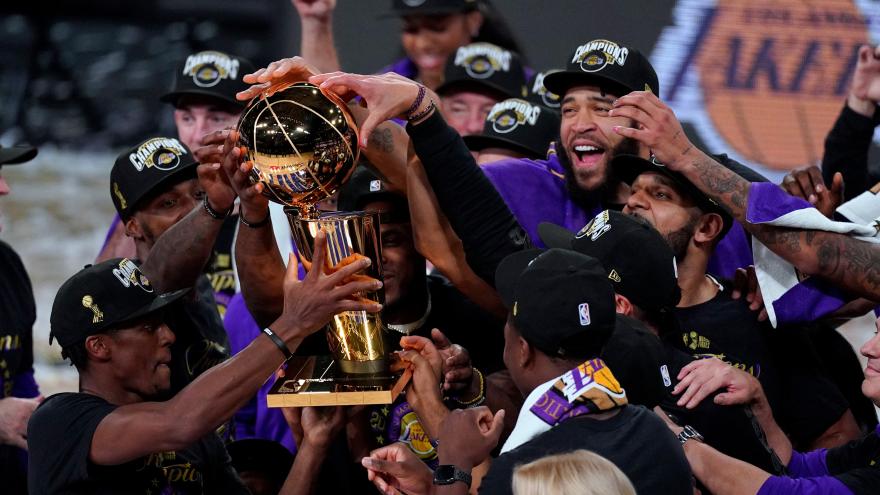 (CNN) -- As the Los Angeles Lakers became NBA champions Sunday night, there were two people whose presence was especially missed.

Vanessa Bryant congratulated the team on Instagram Sunday in a heartfelt post, remembering her husband and her daughter.

"Wish Kobe and Gigi were here to see this," Bryant wrote on Instagram.

It's been almost nine months since Kobe Bryant, along with his daughter Gianna and seven others, died in a helicopter crash January 26.

The Lakers beat the Miami Heat 106-93 in Game 6 of the NBA Finals Sunday night. It was the Lakers' first NBA Finals appearance since Kobe Bryant won his fifth and final NBA title.

Bryant shared a photo of her late husband with Lakers General Manager Rob Pelinka along with the message.

The team's win coincided with Father-Daughter Day on Sunday. Bryant remembered the daddy-daughter duo on Instagram with a throwback image of Kobe holding Gianna in his arms after the Lakers won the 2009 NBA Championship.

Kobe and Gianna shared a special bond. Gianna was a passionate basketball player, and Kobe saw her as the heir to his legacy.

Her father invested in Gianna's future, coaching her team at the Mamba Sports Academy in Thousand Oaks, California.

In Bryant's eulogy of her husband and daughter, she reminded the world of their inseparable bond.

"God knew they couldn't be on this earth without each other," Bryant said of the pair at their memorial. "He had to bring them home to heaven together."