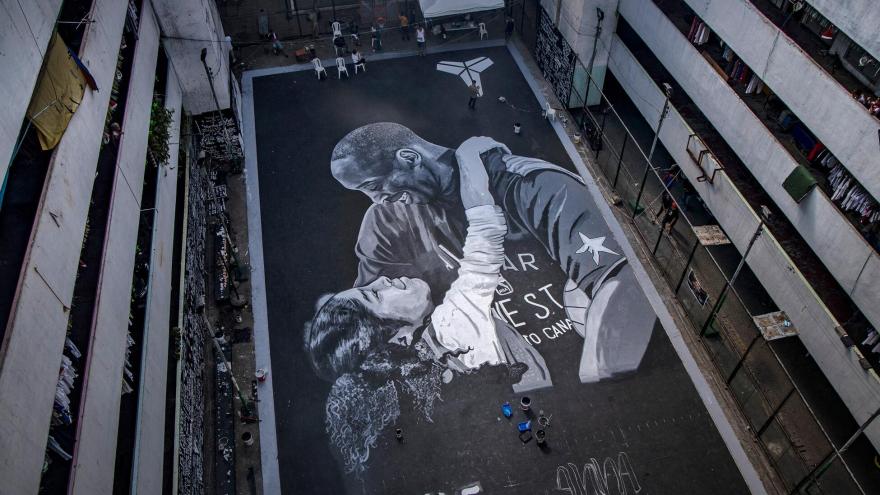 A giant mural of Kobe Bryant and his daughter Gianna, painted hours after their death, is seen at a basketball court in the Philippines.

(CNN) -- Vanessa Bryant has reached a new deal with Nike which will create apparel honoring the legacy of her late basketball legend Kobe Bryant and his daughter, Nike announced Thursday.

The first sneakers to be released under the partnership will be the Kobe 6 Protro "Mambacita Sweet 16," which will honor Gigi Bryant. All the proceeds will go toward the Mamba and Mambacita Sports Foundation.

Bryant and eight other people, including his 13-year-old daughter Gigi, died in January 2020 in a helicopter crash in California. He was 41 years old.

"I am happy to announce that we will continue my husband's legacy with Nike and look forward to expanding his and Gigi's global impact by sharing the Mamba Mentality with youth athletes for generations to come," Vanessa Bryant said in a news release.

The collaboration announcement comes nearly a year after Kobe Bryant's deal with Nike ended last April after the sports apparel giant signed him in 2003.

The deal led to what became one of the most successful sponsorships in history, helping the company strengthen its position in the basketball arena. After Bryant died, Nike quickly sold out of his clothing and sneakers.

"Kobe Bryant means so much to so many of us, not just NBA fans but globally beyond the game," John Donahoe, president and CEO of Nike, said in a news release announcing the new partnership.

Nike and Vanessa Bryant will also work to establish a youth basketball center in Southern California.

"I am also grateful that Nike and I will work together to establish a youth basketball center in Southern California that will share the Mamba Mentality with youth athletes for generations to come," Vanessa Bryant wrote on her Instagram account.