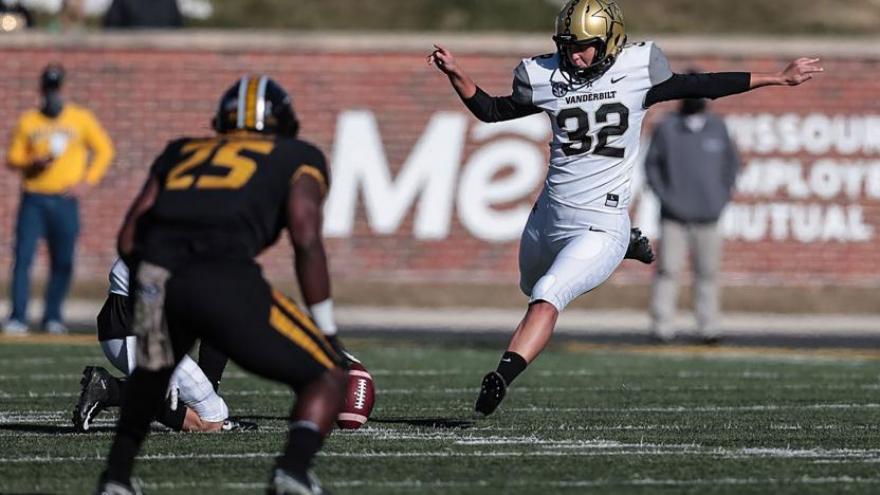 Sarah Fuller is pictured on November 28, 2020, in Columbia, Missouri.

(CNN) -- Sarah Fuller had one message for young women Tuesday when she spoke to CNN's Anderson Cooper: "You can't expect it to be easy. It's never going to be a straight shot."

After making college football history Saturday, when she became the first woman to play in the Power Five Conference and the first woman to officially take the field during a football game in a Southeastern Conference (SEC), Fuller told CNN she was inundated with calls of support from friends, family and even professional athletes like US Women's National Team player Carli Lloyd and NFL quarterback Russell Wilson.

"I never thought my names would be on their Instagrams or social media at all," the Vanderbilt University senior said.

Fuller is a goalkeeper for the Vanderbilt women's soccer team. Her opportunity came because many of Vanderbilt's specialists are in quarantine due to Covid-19, according to the school and ESPN.

"I just had a few days to learn how to do this," Fuller said. "At first, there wasn't a lot of pressure ... I was just proud I was able to step out there and do that and represent female athletes."

Fuller -- who wore the message "Play Like a Girl" on the back of her helmet -- did want to make it clear to young women that there are a lot of "ups and downs" on the path to success.

"So, you just need to be determined in what you're doing and just be passionate about it," she told Cooper. "If it's something you really want to accomplish, don't let those down moments and barriers hold you back from what you want to achieve."

Fuller was selected as the SEC Co-Special Teams Player of the Week, according to Vanderbilt.

Vanderbilt heads south Saturday to play the University of Georgia.

"We've been practicing and training for the game on Saturday," Fuller said.