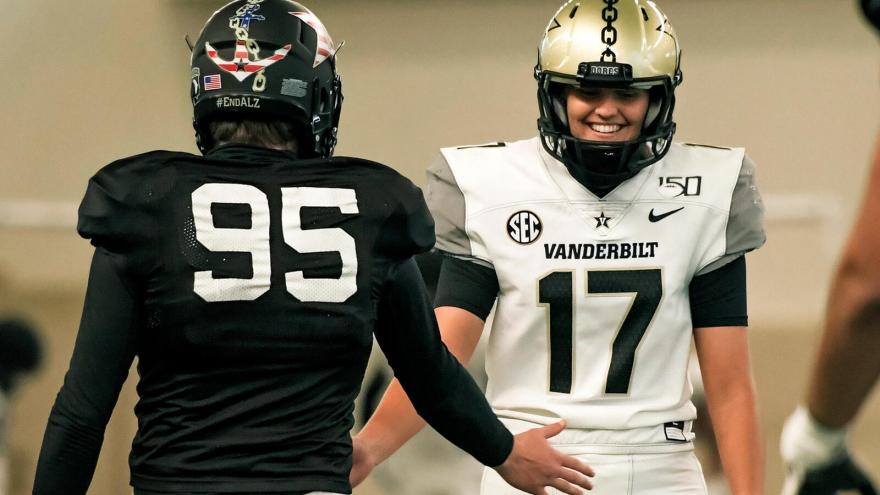 (CNN) -- Vanderbilt University's Sarah Fuller made college football history Saturday when she became the first woman to play in the Power 5 Conference with a kickoff against the University of Missouri.

Fuller took the opening kickoff in the third quarter. The low kick sailed 30 yards before Missouri's Mason Pack downed it at his team's 35-yard line.

"Ladies and Gentlemen, you have witnessed history," Vanderbilt Football tweeted with a video of Fuller being congratulated on the sideline after the kick.

She became the first woman to officially take the field during a football game in a Southeastern Conference and Power 5 Conference game, according to the Vanderbilt athletics' website.

The Power 5 is made up of the biggest athletic conferences, including the SEC, Atlantic Coast Conference (ACC), Big Ten Conference, Big 12 Conference and Pac-12 Conference.

"I think it's amazing and incredible. But I'm also trying to separate that because I know this is a job I need to do and I want to help the team out and I want to do the best that I can," Fuller told the school before the game. "Placing that historical aspect aside just helps me focus in on what I need to do. I don't want to let them down in any way."

Fuller is a goalkeeper for the Vanderbilt women's soccer team. Her opportunity came because many of Vanderbilt's specialists are in quarantine due to Covid-19, according to the school and ESPN. Head football coach Derek Mason told ESPN Fuller "is an option for us."

"She's got a strong leg. We'll see what that yields," Mason told the sports network. "We'll figure out what that looks like on Saturday."

Fuller plans to wear the message "Play Like A Girl" on the back of her helmet Saturday to encourage other young women, according to Vanderbilt.

Two other women have also played in Football Bowl Subdivision (FBS) contests, Vanderbilt says. Katie Hnida did it first when she kicked two extra points for the University of New Mexico against Texas State in 2003. Then came April Goss, who kicked an extra point for Kent State during their 2015 game against Delaware State.