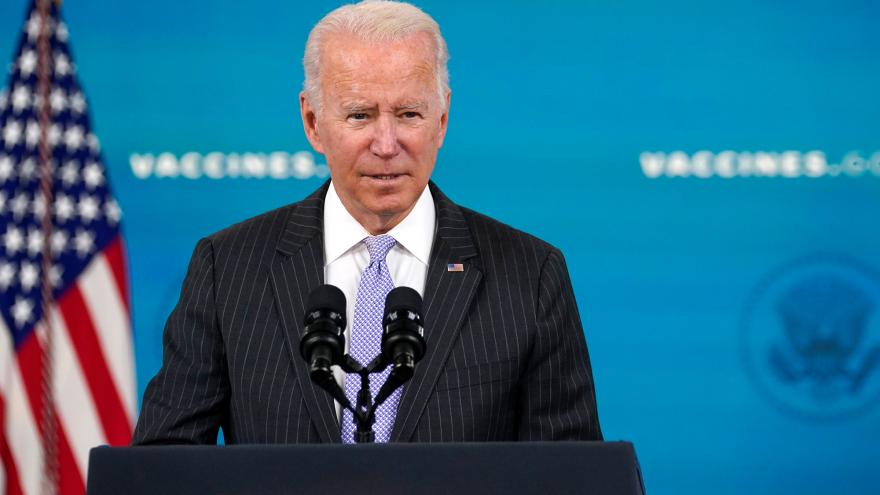 The rules stipulate that employees that fall into those groups will need to have received the necessary shots to be fully vaccinated, either two doses of Pfizer or Moderna's vaccine or one dose of Johnson & Johnson's vaccine, by January 4.

Eighty-four million employees working at large employers and 17 million health care workers at facilities participating in Medicare and Medicaid will be covered by the rules implemented by the Department of Labor's Occupational Safety and Health Administration and the Centers for Medicare & Medicaid Services.

"Together the OSHA and CMS rules, along with the other policies the administration has previously implemented means that over two thirds of all workers in the United States are now covered by vaccination policies," a senior administration official said, discussing the new rules.

"Higher vaccination rates protect our workers, reduce hospitalizations and deaths. It's good for workers and importantly, this is good for the economy," the official continued.

The January 4 deadline also means that the deadline for the federal contractor vaccine requirement is getting pushed back. It had previously been scheduled to take effect on December 8.

The administration had been facing calls from some business groups to delay or be flexible with that deadline, as it could have put even more stress on supply chain issues ahead of the holidays. Officials, however, insisted that the new date was chosen in order to streamline implementation and make it easier for business and employees to comply with the requirements.

"In order to make it easier for businesses to comply and workers to comply, we've decided to align the contractor deadline with the deadlines for both CMS and OSHA," the official said.

The announcement also makes clear that the vaccine rules will preempt any state or local laws aimed at banning vaccine mandates or other measures to limit the spread of Covid-19. Texas and Florida have been among the states that have been attempting to pass their own laws to restrict such mandates.

"Both OSHA and CMS are making clear that their new rules preempt any inconsistent state or local laws, including laws that ban or limit an employer's authority to require vaccination, masks, or testing," a fact sheet outlining the rule said in part.

A second senior administration official, discussing the rules legal authority, said that "the OSH Act gives OSHA the authority to act quickly in an emergency where the agency finds that workers are projected to a grave danger and a new standard is necessary to protect them."

"A virus that has killed more than 745,000 Americans, with more than 70,000 new cases per day currently, is clearly a health hazard that poses a grave danger to workers. The new emergency temporary standard is well within OSHA's authority under the law and consistent with OSHA's requirements to protect workers from health and safety hazards, including infectious diseases," the official continued.

The OSHA rule does allow for employees to remain unvaccinated if they so choose, but the employee must provide a verified negative test to their employer on at least a weekly basis and must wear face masks in the workplace. The rule from CMS does not provide a testing option for workers to remain unvaccinated as there is "a higher bar for health care workers given their critical role in ensuring the health and safety of their patients," according to one of the officials discussing the rules.

A third official said OSHA will be enforcing this rule just like the agency enforces any of the other rules that are in place, and violations could include fines of up to nearly $14,000 per violation, though that fine increases if there is a "willful" violation.

That official said the agency will have planned inspections of some workplaces to ensure they are in compliance with the rule but will also rely on complaints from workers in order to best enfore the new rule.

Enforcement and penalties for health care facilities that do not come into compliance with the rule could range from monetary penalties, denying the facilities payments and possible termination from the Medicare and Medicaid program.