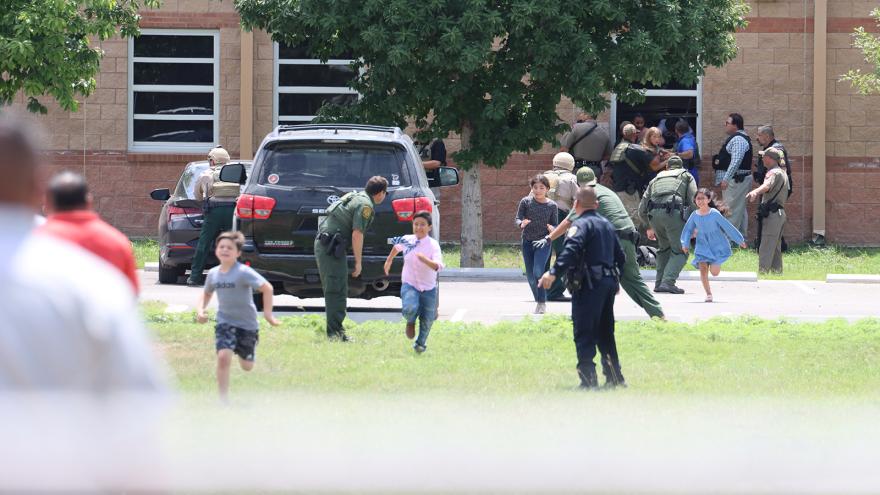 (CNN) -- A preliminary report by the Texas House investigative committee probing the Uvalde, Texas, school massacre outlines a series of failures by multiple law enforcement agencies, describing "an overall lackadaisical approach" by authorities on the scene of the shooting in which 21 people were killed.

It's just one of the findings in the 77-page report, which also details failures by several other entities, including the Uvalde school system, the shooter's family and social media platforms.

But through its investigation, the committee didn't find any "villains" beyond the shooter, according to a copy of the report reviewed by CNN.

"There is no one to whom we can attribute malice or ill motives," the report says. "Instead, we found systemic failures and egregious poor decision making."

The document, which was made available to the victims' families Sunday morning, is described as an "interim report," with the investigative committee noting its work remains incomplete and that multiple investigations remain underway. But it marks the first time since the shooting at Robb Elementary that a government report has offered a comprehensive look at the shooting and the law enforcement response, which has been heavily criticized.

In the days after the attack, officials gave contradictory and confusing information, and key questions about the police response have remained unanswered since the May 24 shooting. Chief among them -- why authorities waited more than an hour in the school hallway before confronting and killing the gunman, a move that law enforcement experts say may have potentially cost lives.

Arredondo, who was put on administrative leave by the school district, told the Texas Tribune last month he did not consider himself the incident commander and assumed that another official had taken control of the larger response.

The committee's report, however, describes "shortcoming and failures of the Uvalde Consolidated Independent School District and of various agencies and officers of law enforcement."

A number of responding officers were from federal agencies, per the report: Of the 376 responders, 149 were from the United States Border Patrol, 14 were from the Department of Homeland Security and 91 were from the Texas DPS.

CNN has reached out to Texas DPS, US Border Patrol, the Uvalde School District, the city's police department and the Uvalde district attorney for comment, among others.

Families to meet with committee Sunday

Republican state Rep. Dustin Burrows, the committee chairman, said last month the group would do "everything in its power" to provide facts and answers about what happened "leading up to, during, and in the aftermath of this tragedy."

Members of the Texas Department of Public Safety, the Uvalde Consolidated Independent School District police chief and officers, the district superintendent, the school's principal, a teacher and custodial staff are among those who testified behind closed doors to the committee -- with roughly 40 people testifying, according to one source.

The committee did not have access to material witnesses, the report says, and medical examiners have not issued reports about their findings. But the investigative committee "believes this interim report constitutes the most compelling telling to date," though "some aspects of these interim findings may be disputed or disproven in the future."

Families of the victims were expected to receive the report and hallway surveillance video, with no audio, of the law enforcement response on Sunday morning to provide them with an opportunity to review it before meeting with members of the investigative committee.

Printed copies of the report were hand-delivered to Uvalde and Texas officials Saturday night out of fear the document might leak to the media before family members of the victims were able to read it, according to some of the officials who received the report.

The surveillance footage was leaked and published by the Austin American-Statesman newspaper last Tuesday, sparking outrage from both local officials and families who said they were blindsided and disrespected by the unexpected release.

In a statement after the video was published by the paper, Burrows said while he was glad a portion of the video was made public, he was "also disappointed the victims' families and the Uvalde community's requests to watch the video first, and not have certain images and audio of the violence, were not achieved."

The investigative committee's report and the video are expected to be released to the public concurrent with Sunday's meeting with family members. A news conference is scheduled for Sunday afternoon for members of the press to ask the committee questions.