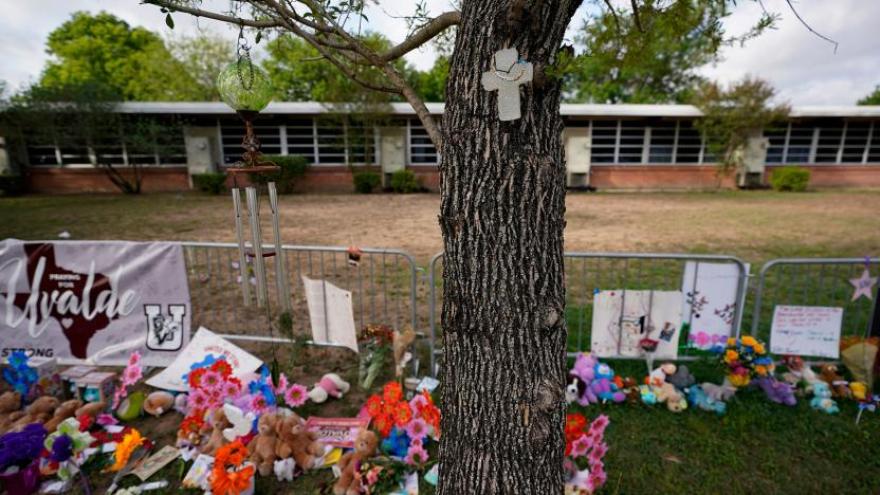 (CNN) -- The Austin American-Statesman newspaper published Tuesday edited portions of school surveillance video showing officers retreating from gunfire in the hallway of Robb Elementary in Uvalde, Texas, during the fatal shooting May 24.

The edited video on the newspaper's website is just more than four minutes long and first shows teachers screaming as the gunman crosses the parking lot of Robb Elementary School after crashing a truck just outside the property. Once the gunman enters the building at 11:33 a.m., hallway surveillance cameras show him walking down the hallway uncontested with a semi-automatic rifle.

Gunfire is heard as the gunman enters a classroom, and a child on the other end of the hallway is seen running. The newspaper says it removed the sound of children's screams from the video.

The first shots that appeared to be directed at responding officers are heard at 11:37 a.m., sending the officers immediately running down to the other end of the hallway in retreat.

Multiple officers are seen with their guns drawn in the hallway, but are not seen approaching the classroom again until 12:21 p.m., after four more rounds are heard from the gunman.

The officers do not directly confront the gunman again until 12:50 p.m., when authorities say the gunman was killed by law enforcement.

The surveillance video comes amid lingering outrage and questions over the police response to the shooting. What officers were doing in the 77 minutes after the shooting started had been largely unclear, and some officials have questioned the trustworthiness of the various investigations working to understand what went wrong that day.

The newspaper later published a second edited video. The second video, posted to the newspaper's YouTube channel, lasts nearly an hour-and-a-half and the audio is also edited.

The newspaper's decision was criticized by a number of victims' family members who said they had wanted to be able to see the footage before it went public, as state officials had promised to do this weekend.

The Statesman's Executive Editor Manny García defended publishing the video in an online editorial but did not explain specifically why the newspaper chose not to wait for the weekend. He said publishing the video was part of an effort to keep individuals involved in the shooting response accountable.

"We are all aligned for truth," García said.

The release came after "long and thoughtful discussion," he wrote.

At a city council meeting in Uvalde, Mayor Don McLaughlin said the newspaper's actions were "one of the most chicken things I've ever seen."

Some parts of the video should not have been released, he added.

"There's no reason for the families to have to see that. I mean, they were going to see the video, but they didn't need to see the gunman coming in and hear the gunshots. They don't need to re-live that, they've been through enough," he said.

The head of the Texas Department of Public Safety (DPS) said he was "deeply disappointed" by the leaked video ahead of the planned public release this weekend.

"I am deeply disappointed this video was released before all of the families who were impacted that day and the community of Uvalde had the opportunity to view it as part of Chairman Dustin Burrows' plan," DPS Director Steven McCraw said in a written statement. "Those most affected should have been among the first to see it."

The Texas House committee investigating the school shooting had planned to release the more than an hourlong hallway surveillance footage to victims' families on Sunday and to the public soon thereafter, state Rep. Dustin Burrows had said on Twitter.

After the video release, he wrote: "I am also disappointed the victim's families and the Uvalde community's requests to watch the video first, and not have certain images and audio of the violence, were not achieved."

The intention of the committee and its professional staff was to meet with the families of the 21 victims in private in Uvalde and provide them with a hard copy of the preliminary report and a link to the video, a source close to the committee said. The committee was also planning to answer questions from the families about the findings, the source said.

A source close to the committee tells CNN that plan has not changed after the edited video was posted online.

Burrows had pushed for the release of the video to the public amid scrutiny of the police response.

However, he said last week he was prohibited from doing so because he signed a nondisclosure agreement with DPS. He also released a letter in which DPS said that it agrees that the video will bring "clarity" to what happened but explained that the Uvalde district attorney "has objected to releasing the video."

CNN has requested comment from Uvalde District Attorney Christina Mitchell Busbee on Friday and on Sunday about why she objects to the release of the video, but has not heard back.

After the video was published, some relatives of the victims took their outrage over the release to social media and urged people to not share the footage.

"PLEASE PLEASE PLEASE DO NOT SHARE THE VIDEO!!'We need time to process this!!," Berlinda Arreola, grandmother of Amerie Jo Garza, wrote on Facebook.

Gloria Cazares, whose daughter Jackie was killed, also implored family and friends on Facebook to not to share the video. "This is the opposite of what the families wanted!!!!! If you are a true friend please do not share it, I don't want to see it in my feed nor do I want to be tagged on any of the news stations that are sharing it."

Her anger palpable, Cazares also posted a photo of the Austin American-Statesman reporter who has written about the video, and punctuated her comments with one directed at him -- "F**k Y**U."

Some family members were in Washington to speak to members of Congress when they heard about the video. It was unclear whether they had watched the edited video.

At a news briefing, Kimberly Rubio, mother of Lexi, 10, said through tears: "We understand that the media wants to hold people accountable, because the government hasn't been transparent with us, but you don't need the audio for that and you don't need the full video for that. What they were going to show us was sufficient. He didn't have to do this."

She added audio of the gunfire wasn't necessary. "We have to tell our family back home not to watch the news and our kids, they have cell phones. This is unacceptable," Rubio said.

Arreola earlier told CNN her family has "mixed emotions" about whether they want to see the video.

"We do, I do, want to see the video," she said. "At the same time, I'm afraid of how I'm going to feel because right now we have so much anger, we have so many mixed emotions. Hurt more than anything, because of what happened. Then anger, because we're not getting the answers that we need.

"Seeing that, I think is just going to make everybody else more angry, knowing that they were just standing there, basically doing nothing for that long period of time. They may say they were waiting or they were getting prepared. Seventy seven minutes to get prepared is way too long," she said.

What the video and report will show

The video and preliminary report are expected to clarify what police were actually doing as they waited in the hallway and will contradict earlier public statements and official reports.

For example, a report just last week from the Advanced Law Enforcement Rapid Response Training (ALERRT) Center stated that an armed Uvalde police officer spotted the gunman outside the school and asked for permission to shoot.

However, the source close to the committee said this account is not true and did not happen. Uvalde Mayor Don McLaughlin also refuted the account as untrue.

And on Monday night, the assistant director of ALERRT, John Curnutt, said their findings were based on two statements from an officer that were then contradicted by a third statement.